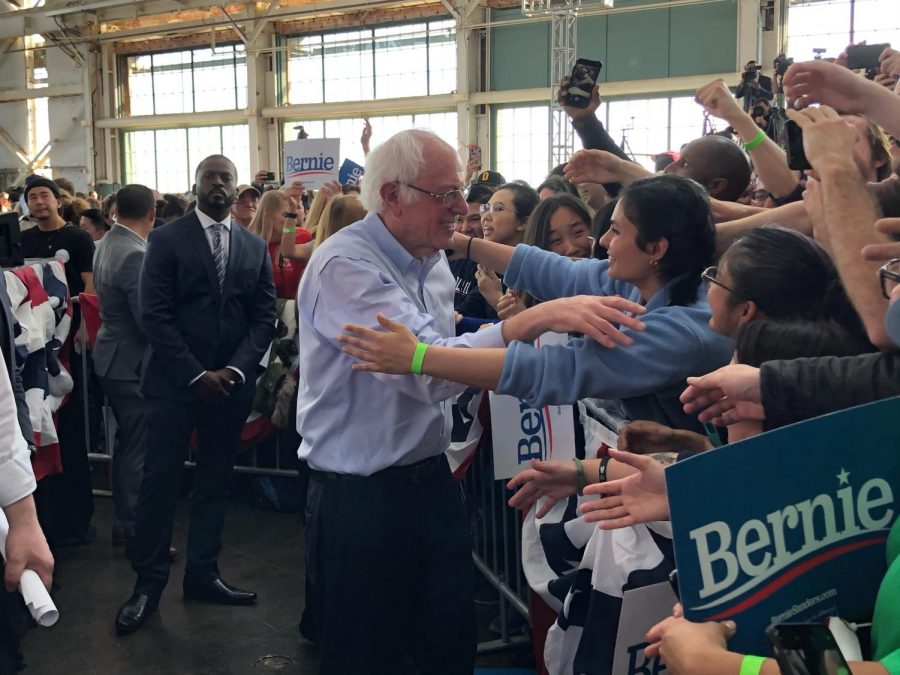 Senator Bernie Sanders embraces a loving fan at a recent rally in Richmond, CA. The energy in the crowd is electric as Sanders takes the time to shake hands and hug fans at the front of the audience.

The Oak Leaf Editorial Board, considering the interests of Santa Rosa Junior College students and faculty, endorses Senator Bernie Sanders of Vermont to be the 46th President of the United States because of his positions on climate change, Medicare-for-all, student debt relief, tuition-free public colleges and housing-for-all.

The gravity of climate change’s impact on students’ futures cannot be understated.

Bernie Sanders’ support for the Green New Deal, an overhaul of the American economy, and American action against climate change abroad are the best last hopes for the future of humankind.

Current SRJC students will forever live under the shadow of climate change, and the situation is only on track to deteriorate to near-apocalyptic conditions without aggressive, unprecedented government intervention.

According to the Sanders campaign, “The $16.3 trillion climate change proposal that Bernie has introduced will fundamentally transform our energy system away from fossil fuel and towards energy efficiency and renewable energy. It will also create 20 million good-paying union jobs in the process.”

Without major action, the U.S. will lose $34.5 trillion in economic productivity by the end of the century.
Medicare-for-all
Sanders’ “Medicare For All” proposal would provide healthcare, vision and dental care to all Americans for a fraction of the cost of private insurance premiums and would not impact free access to doctors, specialists and hospitals; nor impact quality of care.

SRJC students struggle with the costs of education, housing and simply feeding themselves. Though some of the more privileged students may still be on their parents’ insurance plans until age 26, many SRJC students lack critical access to healthcare.

Uninsured emergency room visits of the young and poor stress our hospitals and communities, because when hospitals have to pick up the tab, they pass that cost on to paying patients.

Giving disenfranchised students an opportunity through education is one of the foundational principles of SRJC, but when students lack access to basic services like healthcare, that mission becomes more difficult.

At a time when record numbers of students across the country are reporting crippling anxiety, depression and mental illness, getting all students’ access to mental health services covered, regardless of their race, gender or economic background, is key to their success.

Though Medicare-for-all will require raising taxes on all American employees and employers, it will eliminate private insurance companies and their high “for-profit” premiums and actually save Americans money.

Medicare-for-all will also impose pricing controls on prescription drugs to combat the profiteering of the Pharmaceutical Industry, because Americans pay some of the highest prescription prices in the world.

According to a Feb. 15, 2020, study by Yale University epidemiologists, Medicare-for-all would save more than $450 billion in health care costs and prevent 68,000 unnecessary deaths – each and every year.

Over the next decade, the U.S. is projected to save $5 trillion under a Medicare-for-all plan.

According to a 2019 RealClearPolitics poll, 65% of Americans support Medicare-for-all.
Student debt relief and tuition-free public college
SRJC students face a future in which their college degrees are increasingly worth less while costing more. Student debt and economic insecurity are the crippling fears of the common college student in America, and Santa Rosa is no different.

The Sanders administration would cancel all student loan debt for 45 million Americans who collectively owe $1.6 trillion and place a cap on student loan interest rates at 1.88%.

It would invest $1.3 billion in HBCUs, as well as other minority-serving institutions. The goal is to end equity gaps in higher education for students from underprivileged socioeconomic backgrounds and ensure students are able to cover the non-tuition costs of attending college by expanding Pell Grants and tripling funding for work-study programs.

For an estimated $2.2 trillion, higher education can be guaranteed as a right to all and all student debt forgiven.

To pay for this, Sanders would impose a tax of a fraction of a percent on Wall Street speculators. This Wall Street speculation tax is estimated to raise $2.4 trillion over the next decade. It works by placing a 0.5% tax on stock trades – 50 cents on every $100 of stock – a 0.1% fee on bond trades, and a 0.005% fee on derivative trades.

According to Sanders, “If Wall Street can be bailed out for several trillion dollars, 45 million Americans can and will be bailed out of the $1.6 trillion burden of student loan debt, and we can provide free college for all. Some 40 countries throughout the world have imposed a similar tax, including Britain, South Korea, Hong Kong, Brazil, Germany, France, Switzerland and China.”

In short, if Wall Street can gamble our futures with the full faith and backing of the United States Government, the students of this country should be able gamble on an education and an opportunity for a better life with that same support.
Housing-for-all
In 2020, the U.S. student homeless population reached 1.5 million.

According to the SRJC website, 23% of its students are homeless and 63% are housing-insecure.

Cities across the country have been facing a homeless crisis that has radically expanded the definition of what it means to be homeless in America. Where once homelessness was viewed through the lens of single males with drug and mental health issues, the narrative has now shifted to include a diverse range of people, such as the working poor, immigrant families and people displaced by natural disasters.

After the Tubbs fire in 2017, hundreds of SRJC students lost their homes. Hundreds more were driven out by the high rents that followed. A gentrified market and housing shortage combined to drive the cost-of-living to levels almost unattainable for ordinary people.

The homeless crisis at Joe Rodota Trail proved to many Sonoma County residents that the old ways of dealing with homelessness, in jails and out of sight, was simply not working. The system was strained to its limits.

Even as people shine a new light on the homelessness issue in Santa Rosa, the voices of the student homeless are often ignored.

Student homelessness has become more common than most people realize. Even students not traditionally considered underprivileged or at-risk have at times experienced bouts of homelessness. Stigma leads to underreporting, and many students who experience housing insecurity do not identify their experience as “homelessness.”

Couch-surfing, sleeping in cars or barely making the rent are all products of housing insecurity.

With 46% of SRJC experiencing food insecurity, students are often forced to choose between paying the rent or buying food.

It is the view of The Oak Leaf Editorial Board that in a country as wealthy as the United States, and in a county as privileged as Sonoma, students should not have to make a choice between paying the rent or feeding themselves.

In the words of Sanders, “In the richest country in the history of the world, every American must have a safe, decent, accessible and affordable home as a fundamental right.”

His proposal is to guarantee housing as a human right and eliminate homelessness.

It will cost $2.5 trillion over the next decade. It is fully paid for by a wealth tax on the top one-tenth of 1% – those who have a net worth of at least $32 million. This wealth tax is projected to raise a total of $4.35 trillion.

The plan will create thousands of jobs by using the money to construct nearly 10 million “permanently affordable” housing units.

It would also strengthen renters’ protections, guarantee “just-cause” evictions and ensure the right to counsel in housing disputes.

Section 8 vouchers will be given to families without a wait-list to make rent more affordable, and the Fair Housing Act will be strengthened.

The plan will invest $70 billion to revitalize, repair and decarbonize public housing.
Electability
Despite questions of Senator Sanders’ electability, The Oak Leaf Editorial Board considers him the most likely candidate to defeat President Donald Trump, due to his immovable core of support at approximately 20-30% in every state, his limitless pool of small-dollar donations, his fervent horde of volunteers and his ability to speak to the anger and disenfranchisement at the heart of Trump’s presidency.

Dozens of credible polls have him defeating President Trump, both nationally and in the key swing states of Michigan, Wisconsin and Pennsylvania.

In 2016, more than 300,000 Bernie primary voters in key swing states then voted for Trump in the general election, and that those margins very likely gave Trump the presidency. The board believes that Bernie is the only Democratic candidate able to speak to these swing voters and bring them back into the Democratic fold.

It is the view of the board that, given another candidate is awarded the Democratic nomination at the convention, that candidate will not have similar support of the Democratic base and anti-establishment swing voters, without which victory in a general election will prove to be impossible.

In other words, the idea of Bernie-or-bust remains all too real in 2020.

Bernie Sanders is the first presidential candidate in the history of competitive primaries to win the popular vote in Iowa, New Hampshire and Nevada.

At this point, with his delegate, financial and polling advantages (especially among minority populations, a sore spot in most Democratic candidates’ polling), dethroning Bernie Sanders at the convention would deal irreparable damage to Democratic electoral opportunities in the general election and disenfranchise an entire grassroots movement and the youth who uphold it.

Every Democratic primary voter should confront the impotency of the other Democratic candidates, as well as their inability to create winning coalitions, and vote for Senator Bernie Sanders to prevent a contested convention, which has the potential to not only waste Democratic resources but also throw a potentially fatal hand grenade toward the effort to unseat Donald Trump.

The sooner we unite around a candidate, the sooner we can take our fight to Donald Trump.