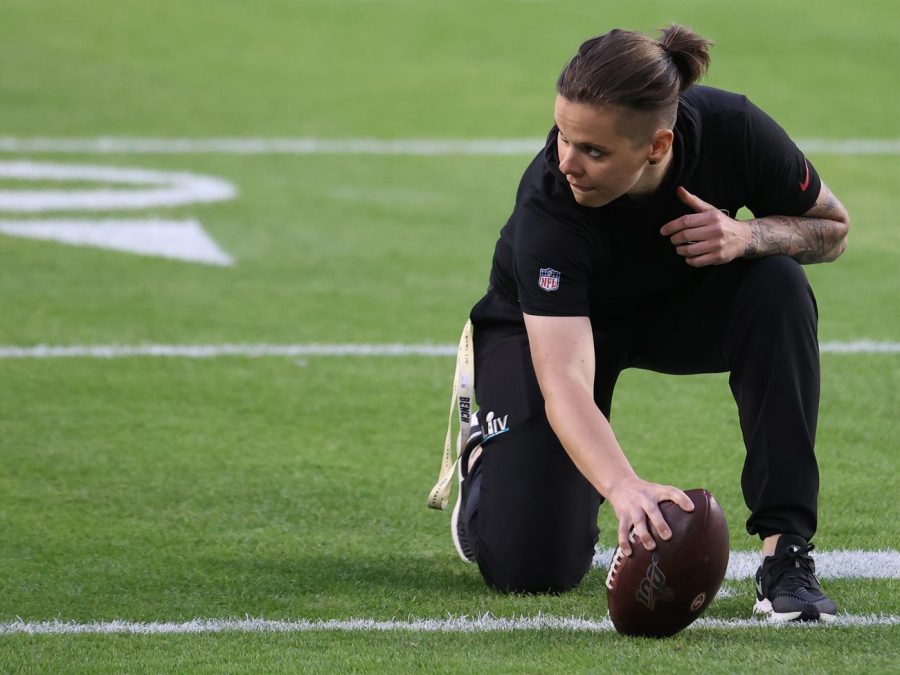 The San Francisco 49ers' Katie Sowers is the first female to coach in the Super Bowl, taking the field against the Kansas City Chiefs as an offensive assistant.

A few weeks before the Giants hired Nakken, my dad and I were talking about how MLB needed to do more in hiring female coaches. Over the course of the past 10 years, the three other male professional leagues — the NFL, NBA and NHL — had all found a place for women on their sidelines; however, baseball had fallen behind.

America’s pastime was stuck in the past.

As a die-hard Giants fan and a gamer myself, the news of Nakken’s hire made me grin from ear to ear. Of course I was thrilled that little girls would see a female face when they tuned-in to watch professional baseball, but I was even more grateful for the message it sent: that women are capable of leading and teaching grown men.

The Giants hired Nakken in 2014 as an intern. She worked her way up through the organization and, although she won’t yet be in the dugout on game day, the Giants are looking to her to contribute in big ways.

“In addition to assisting the rest of the coaching staff on the field, …Alyssa will focus on fostering a clubhouse culture that promotes high performance through, among other attributes, a deep sense of collaboration and team.”

Giants players will be expected to learn from her, listen to her and to take direction from her — just as they do every male coach on staff. This represents a major shift in the league, a place where men always only listened to each other.

That’s the same as in the NFL, where Sowers is an offensive assistant who burly, 300-pound linemen are expected to listen to. She is thrilled at her day-to-day, but also at what it means for the bigger picture.

“Being the first female in the Super Bowl, it’s surreal,” Sowers said. “It really is. But what I want to continue to say is that even though I’m the first, the most important thing is I’m not the last and we continue to grow it.”

The good news is that these two women aren’t the only ones coaching in the pros.

In 2014, the San Antonio Spurs hired Hammon to become the NBA’s first full-time female assistant coach. That following summer, Hammon was head coach during the Las Vegas Summer League. Although Hammon is still an assistant coach for the Spurs, learning from legendary Head Coach Greg Popovich is only going to make a better coach and hopefully a great head coach in the near future.

The NFL joined in a year later when the Arizona Cardinals were the first team to hire a full-time woman coach, hiring hired Jen Welter as an inside linebackers coach.

Soon after the NBA and NFL made those hires, the NHL’s Arizona Coyotes hired in 2016 Dawn Braid as the skating coach. Since then no other woman has been hired in pro hockey.

In 2019, the Tampa Bay Buccaneers were the first team in NFL history to hire two full-time women coaches, Maral Javadifa and Lori Locust. Javadifa is the team’s assistant strength and conditioning coach, and Locust is the assistant defensive line coach.

At the end of 2019, the New York Yankees hired Rachel Balkovec to serve as a minor league hitting coach and the Chicago Cubs hired Rachel Folden as lead hitting lab tech for the team’s Arizona Rookie League.

Women have also started to make their mark in male sports off the field.

In March of 2019, Jessica Mendoza — a gold medalist softball player — accepted a role as baseball operations advisor in the New York Mets’ front office where she evaluated players and helped build the roster. One year later, Mendoza resigned to expand her role at ESPN where she is both a weekday SportsCenter analyst and analyst on Baseball Tonight where she will call World Series games.

All of these women matter.

Listening to Mendoza and watching Locust is exciting. But tuning-in to Sowers on the sidelines during the Super Bowl was empowering. Their presence — and the fact that there are men wise enough to hire the best candidate, regardless of their sex — makes me think I can do anything in the sports world, whether it be in sports broadcasting, coaching or being part of a professional team’s front office.

Maybe the day has finally arrived when my sex won’t dictate how far I can rise in the sports.