Don’t call me an e-girl: What it’s like being a woman in the gamer world 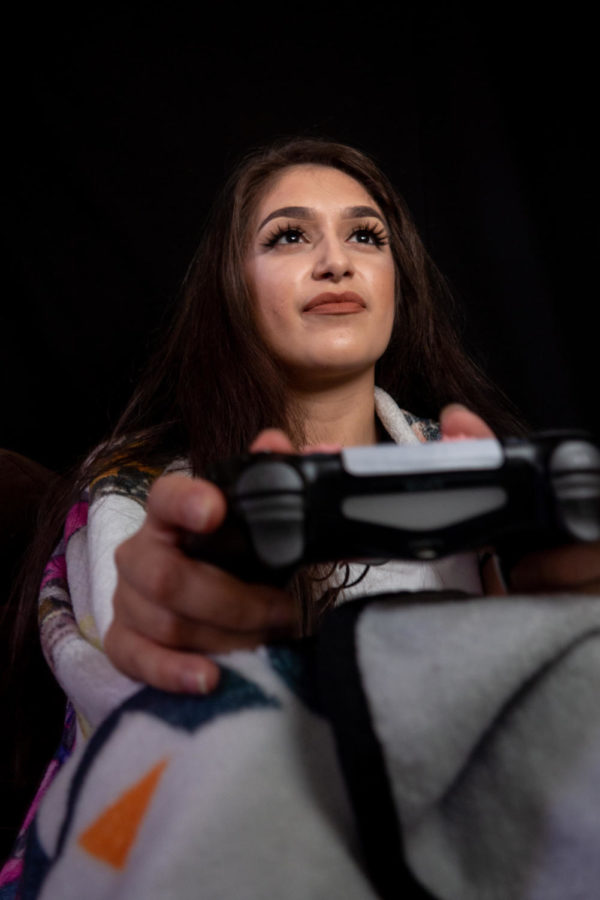 Eileen Rodriguez endures the harassment so common to female gamers.

“Slut!” he called me. I’d only been logged in for a minute.

“You suck at this game because she takes no skill to play,” he taunted, after I chose the character I wanted to be.

“You’re teaming with your male friend. You must be an e-girl,” he laughed. According to Urban Dictionary, an e-girl is  “a girl who is a slut over the internet.”

Being a girl in the gaming community is stressful. A lot of women in the community struggle deal with the constant misogyny, mostly from men, in video games. They call women names and troll them  online.

How do I know this? Because I experience it on a daily basis.

I began playing “Overwatch,” a multiplayer first-person shooter game, two years ago. Some argue “Overwatch” supports a toxic community in general — that all players get harassed. Sure, every fandom can have a toxic component, but let’s be real; it’s worse for girl gamers.

I chose to main, meaning play one character, Mercy, more than others. It’s a stereotype in the “Overwatch” community that every woman plays Mercy because she doesn’t have to aim her weapon and the player can just hold down a button to heal her teammates. But I chose Mercy because I grew up playing the priest class in “World of Warcraft,” and the support role interested me ever since.

Yet despite the fact I had a legitimate reason for my decision — that my choice wasn’t based on weakness — I still let the trolls get to me.

Because of their name-calling, I began playing a variety of other characters. I made the switch not because I was embarrassed to have chosen Mercy like other female players, but because I wanted to prove the trolls wrong, to prove to my male gaming peers I could play another character.

One day I was playing competitive rank, a mode in “Overwatch” that allows you to play against other people with the same skill level, with a couple of friends. They had a friend who verbally attacked me for playing the character Mercy.

“You only know how to play Mercy. You suck at this game because she takes no skill to play,” he said. “Play a role other than support. Here, I’ll take Mercy from you and you can take my damage role.”

This boy yelled at me through my headset. I had never met him in my life.

In an attempt to prove this random guy wrong, I took his role, but I wound up losing the competitive game for our group. I blamed the loss on myself because he made me feel uncomfortable with his non-stop name-calling and forced me into a role in which I wasn’t as skilled.

I felt really crappy that evening and held all my negative feelings inside.

In another example, I was playing “Overwatch” with a male friend when another player called me an “e-girl” repeatedly, simply because my internet was bad. (Since when is Comcast’s sucking my problem?) The player on my team, the one who was calling me names, thought I was trolling to make him lose the match purposely, when of course I wasn’t.

In other instances, users have called me an “e-girl” — repeatedly — simply because I was teaming with my male friend. It’s frustrating and enraging that other guys assume my relationship with my friend is romantic or sexual — or anything more than friendship — simply because I’m a woman and he’s a man.

Because of all of these incidents and countless others, I don’t turn on my mic anymore. Once guys hear a female voice, they start to target me with names, or they just laugh at me. This only seems to happen in online gaming because in offline games, such as role-playing games, no one can bother you, and you can enjoy being by yourself without trolls.

I still get harassing messages calling me names. And if the trolls can’t get to me directly, they’ll message my teammates to talk trash. It doesn’t help that my PlayStation username happens to be “girly,” making it easy for enemy teammates to focus on me in the game and making it impossible for me to enjoy.

So what’s the point of playing?

While the harassment may get to me every now and then, I have become more confident in myself thanks to gaming. I know I can’t stop every troll, but I can prove them wrong one-by-one by continuing to play and prove their words don’t get to me. The more skillful I become, the more they’ll have to respect me.

Online trolls won’t ever stop me from playing because if I stop, they will have won.

And I’m way too competitive to lose.