Ask more: on having consensual sex 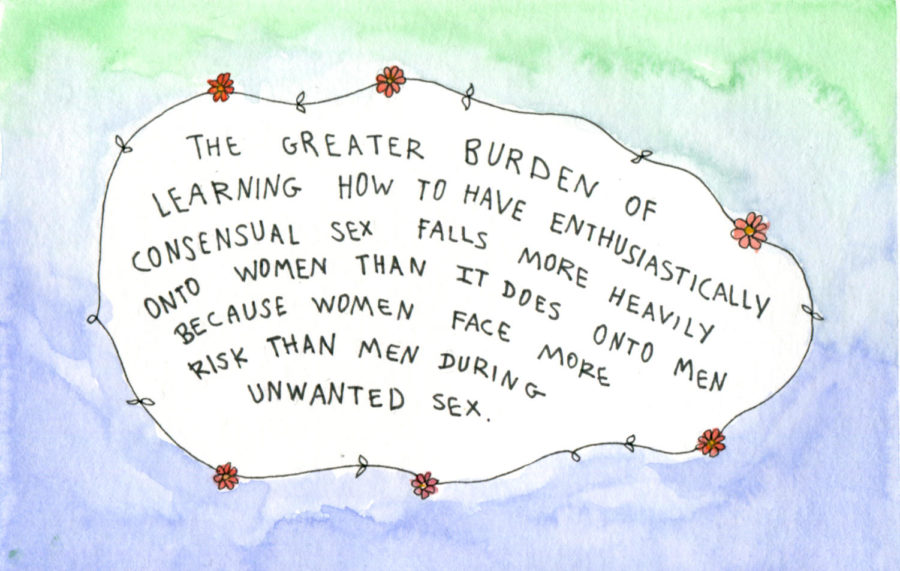 Many sexually active people do not conform to a gender and may have sex outside of the heteronormative encounters referred to in this article, and that sexual coercion happens to these groups as well. I refer to heteronormative sex here because I address the risk facing women who have sex with men. I welcome input from people who have non-heteronormative sex.

Casual sex isn’t new, but its accessibility is a whole new frontier. While it’s liberating for women, “hookup culture,” set to hyper-drive by modern dating apps, remains limiting and dangerous.

It’s focused on male pleasure, and sometimes it can be unsafe or coercive.

We are navigating physical intimacy in a world framed around the sexual literacy of straight cis men, and it sucks.

We need to better define how to ask for—and then maintain— sexual consent.

SRJC student Kate Houser, 19, describes sexual encounters that weren’t pleasurable, but didn’t feel like “assault” because she didn’t say “no.” Her partners had no idea how to find out how she was feeling.

Consent is now defined as enthusiastic, ongoing, verbal and nonverbal communication during sex. Then why do so many people have nonconsensual sex?

“So many of my female friends have had a negative sexual encounter with a man at least once. But I bet a majority of men would say they haven’t,” Houser said.

The greater burden of learning how to have enthusiastically consensual sex falls more heavily onto women than it does onto men because women face more risk than men during unwanted sex.

People wonder, ‘Why wouldn’t a woman say something if sex is painful, or just leave if she doesn’t want to have sex anymore?’”

There are many answers to this question, but the fact is that women are conditioned from a young age to ignore their discomfort. They’re taught to please men and to express their sexuality through their appearance but not with their voice. It’s so cooked into our daily interactions that we forget it’s even happening.

As a society we learn through media about male sexual pleasure. But pop culture and sex education set us up poorly to navigate female pleasure.

A very real consequence of this is the orgasm gap. Men have far more orgasms during heterosexual sex than women.

This is important because many men would describe “bad sex” as an experience when their partner is passive, or when the encounter is boring.

“But when most women talk about ‘bad sex,’ they tend to mean coercion, or emotional discomfort or, even more commonly, physical pain,” writes Culture Critic Lili Loofbourow in an article titled “The female price of male pleasure.”

Hint: Your partner’s passivity during sex is a strong indication that you lack enthusiastic consent.

Yet some people might enjoy having sex in a passive way. To be safe, ask if you are unsure what your partner’s behavior means.

“Asking ruins the mood,” some people say. I hear you, but I think you just have to get used to it. Do it until it feels normal.

“I think if the girl has a pretty confident answer, the tone of her voice has to say she’s willing to go all the way,” said Noe Calden, 20.

When do you ask?

Before penetration, Lepe said. He looks for body language and verbal cues.

If a woman feels “threatened,” her consent might be coerced, and therefore not actual consent.

Lepe and Calden’s scenarios are a great start, but in general, how can we be sure we haven’t unfairly pressured our partner into giving us the signals we’re looking for?

“They’re like ‘How many times will I say no before I say yes?’” said Sunny Albright, 21.

A forced or coerced “yes” is not consent.

I’ve been mulling this over and over since the Aziz Ansari incident in January. A woman, who goes by “Grace”, went on a date with Ansari where he allegedly pressured her into having oral sex with him. She later accused him of sexual misconduct. Ansari said he thought everything was ok at the time, but he also apologized to her after she confronted him about it.

Some people think Ansari, a writer and comedian whose work often centers on dating culture, had to understand the signals his date was sending. Others cry that Grace didn’t make herself clear. It’s her job to be more vocal about her comfort level. Ansari can’t read minds, after all.

The voices weighing in, like The Atlantic’s Caitlin Flanagan and writer/comedian Melinda Taub, can’t agree on whether Ansari’s and the victim’s behavior is just part of dating, or part of a sexist dating culture ripe for overthrow.

A 2017 study from the Journal of Interpersonal Violence, which examines the way men perceive sexual cues from women, shows that men conflate women’s clothing, for example, with her sexual interest. The study calls this an “unreliable situational cue.”

Now that I have a term for this, I would add things like laughing at your joke, allowing you to put a hand on my shoulder or waist—because I don’t want to be rude and throw it off,—or maintaining polite eye contact while you talk as other examples of unreliable situational cues.

None of these things should be conflated as sexual interest or intent from a woman.

The Journal of Interpersonal Violence study then describes how misperception of womens’ sexual intent might lead to further coercive sexual behavior.

According to the National Sexual Violence Resource Center, 20 to 25 percent of women and 15 percent of men are victims of forced sex during college and 90 percent of victims never report the incident.

I’m struggling to find data about the number of cases of coerced sex, understandably.

PSA: Putting your penis inside a vagina that isn’t lubricated can be painful for her. See reason number one here.

Note, however, that confusion over consent doesn’t always boil down to men misperceiving a woman’s verbal and nonverbal language.

Sometimes people are purposefully ambiguous with their sexual intentions for fear of rejection or social stigma. We perceive that everyone is having more sex than they actually are.
Sometimes we allow a sexual interaction to continue when it’s unwanted because we wish to be perceived as pleasant, agreeable or hospitable.
Sometimes it feels more unsafe to force an encounter to stop than to let it continue.
Sometimes people consent to sex when it’s not wanted in order to develop intimacy with a partner.

These reasons apply to men as well.

Coming back to our definition of consent, how do we define “enthusiastic nonverbal consent?” It might be especially difficult to grasp this with a new partner.

“You have to learn their love language,” said Bethany Martens, 19.

So perhaps we can’t expect it to be easy to obtain enthusiastic verbal and nonverbal consent with a new partner, but we can better prepare young people to work harder to obtain consent.

“The big issue around it is that it’s not presented in school at a young age. At least not for me,” said Zach Fontanes-Halliday, 22.

By the time Fontanes-Halliday learned about the idea and morality of consent, he was already having physical relationships.

In addition to starting consent education early on, perhaps we can normalize—starting now—the idea that obtaining consent takes time during an encounter. When in doubt, you can’t infer it.

Body language is different from body to body, obviously. Reinforce consent verbally. When non-verbal consent is unclear, ask. And ask again during each new step in a physically intimate encounter. Not just before you “put it in.”