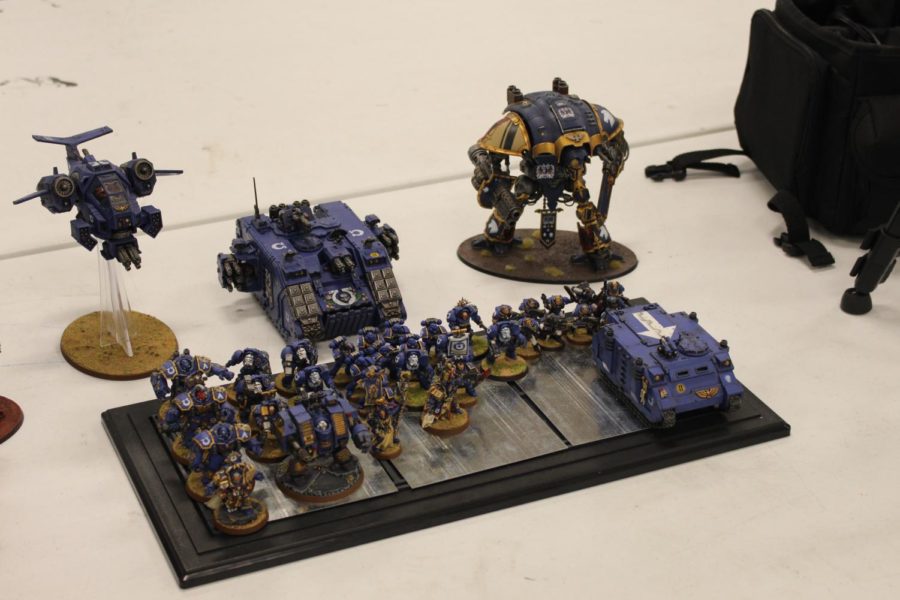 Warhammer Fantasy, Warhammer 40k, HeroScape, BattleTech and War Machine are games I heard about but never touched. I got into wargaming after I found a number of fan fictions and was offered an army from a friend who was selling his.

Wargaming, a type of strategic game that involves military operations, started in 1950 with the first Napoleonic and American Civil War games. It’s older than Dungeons and Dragons, which started back in 1974 when Gary Gygax and Dave Arneson got bored of there normal Napoleonic wargame and added personal encounters into their games.

Wargaming is real-time strategy gaming played on a tabletop battlefield with figurines. In these games, players get to be generals of their own army. Players are able to fight off whoever comes to attack with a mix of generic and special units.

There are two objectives: obliterate the opposing army completely or meet whatever victory condition that’s set in place, like capturing points or killing the leader of the rival army.

I have spent between 200 to 400 dollars on a mix of metal and plastic figures, but a starting army is around $85. Along with the figures, you need strategy books to play as various armies, tape measures to check lines of sight, a weapons range and paint for figurines.

Out of the many different warring factions of the Warhammer 40k game, I picked the imperial guard. This faction also specializes in ranged combat with mortars and cannons, rather than hand-to-hand combat with swords and axes.

The hardest part of all of this was trying to find someone to start a game with. The cost to get started in the hobby is high, and games can last up to 8 hours. Rules have to be double checked and moving many units takes time.

Die consisting of 30 or so points are rolled for the three big checks: First, did any of your attacks hit? Second, did the armor deflect the hit? Lastly, did the pure power of grim dark block the attack?

The fan base can be intense at times and the competition is fierce with participants playing to win. They expect you to read the entire rule book and will chew you out for it if you don’t.

So with that you may ask, why play complex computer-in-print-form games with people who may take it a bit too seriously.

Well, it felt like I was a war general overseeing an army, in a way that strategy video games  don’t offer. The unpredictability of playing with real people who are in the same room as me meant that games were very challenging and opponents were much smarter than the AI opponents found in video games.

Also, these tabletop games involve the participant’s imagination. The match seemed more powerful than in video games, since the few moments in between turns are spent describing a particular wargame’s scene, like the bloody craters where men and aliens once stood.

The game got me to think tactically about how to shift people around the map, who was attacking what tank or how to react when that tank was reduced to ash and red mist.

I can’t play as much as I like because it takes up a full day, but I thoroughly enjoyed the few games I’ve played.

If you’re interested in this hobby you can get new figures from the maker’s sites. Or you can get affordable, used figures from Ebay and Craigslist. Some popular local places to play are at Santa Rosa’s Outer Planes Comics and Games and Rohnert Park’s Fundemonium.