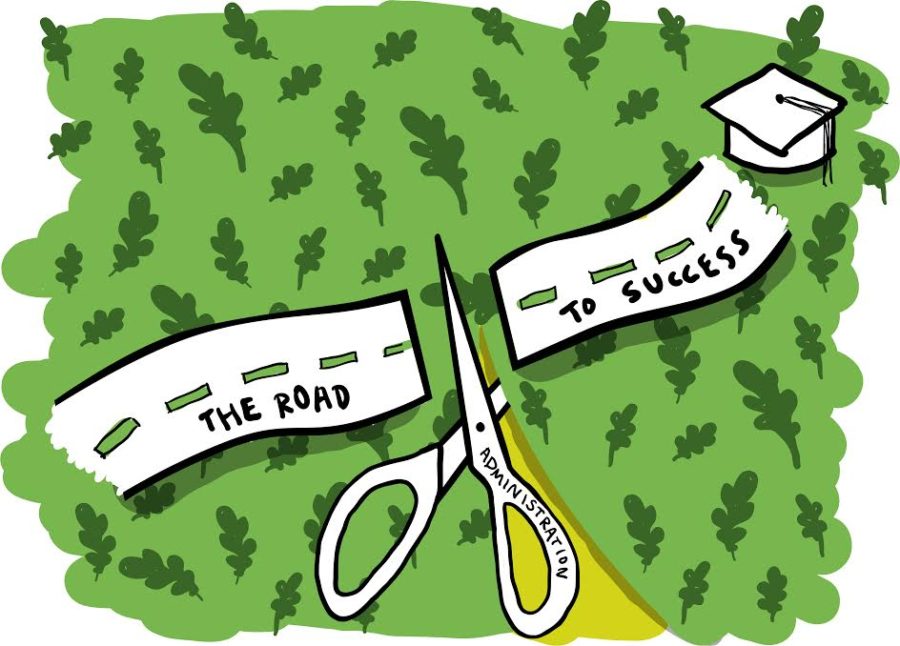 Editor’s note: To receive updates on stories like this, please download the Oak Leaf mobile app for Apple or Android.

For many Santa Rosa Junior College students, the recent announcement of proposed summer class cuts serves a massive halt to the progression of their college paths. The proposal and its silent implementation is another recent instance of the incompetence of SRJC’s administration.

I can only imagine how angry I would be if one class, cancelled by a self-serving administration, prevented me from accomplishing my goal of continuing my higher education and becoming a contributing member of society.

Two semesters ago I took my first summer class, and had I taken summer classes every year I may have been able to transfer sooner. Current students may not have that option if the independently operating administration continues their foolish and confusing scheme.

It’s outrageous that a school that prides itself on creating opportunities to help students succeed would make such a devastating decision without consulting faculty, staff and most importantly, students first.

Not to mention, one of the administration’s main arguments for approving the controversial Guided Pathways program earlier this year was to decrease the time students spend at SRJC before completion.

“The suddenness of our announcement regarding the reduction of the summer schedule, without adequate consultation is unacceptable and counter to my commitment to shared governance,” Dr. Chong said.

The famous quote by U.S. Naval Officer, Grace Murray Hopper reads, “It’s easier to ask forgiveness than it is to get permission.”

It seems Dr. Chong is following this saying.

“Quite honestly I am not afraid to admit I made a mistake. I own it and will try to learn from it and not make that mistake again,” Dr. Chong said.

Begging for forgiveness after making a choice of this caliber is a meager reparation. I’d also like to point out the calculated timing of both the announcement and its retraction.

In the political world, announcing negative news is usually done at the end of the workday on Friday so politicians can hide out over the weekend. The original announcement was made at the end of the academic week, just after 4 p.m. and only to faculty members.

Then Chong’s “retraction,” which referred students to the admissions and records office to handle their concerns, was made at 5:16 p.m. on Friday after the JC closed for the weekend.

Nevertheless, Dr. Chong and the administration have received enough backlash to flip-flop their position. How else did they think this would pan out?

What are the school’s motives? Why was this verdict made with only the administration? And most perplexing, how could they possibly have thought that cutting the summer session was a reasonable solution to the budget crisis, caused partly by the administration’s mismanagement?

Will the well-paid administration come to an agreement with our student representatives as they promised? Will our summer classes still be in effect after next week is over?

Or is Chong’s latest unclear message another political tactic to delay consequences and impose his will on an enraged yet helpless campus community through confusion and misdirection?

We can only sit, wait and hope the “leaders” in whose hands our futures rest decide in favor of student success.

The administration has still yet to announce the reason for resulting in this cut rather than doing without other aspects of expense, like the inflated salaries of the hundred or so administration members.

Nor have they explained why this was an executive decision made without the consideration of the people this institution is made to serve, the community.

Please share your stories on how this change may affect your future in the comments or email The Oak Leaf staff at [email protected].