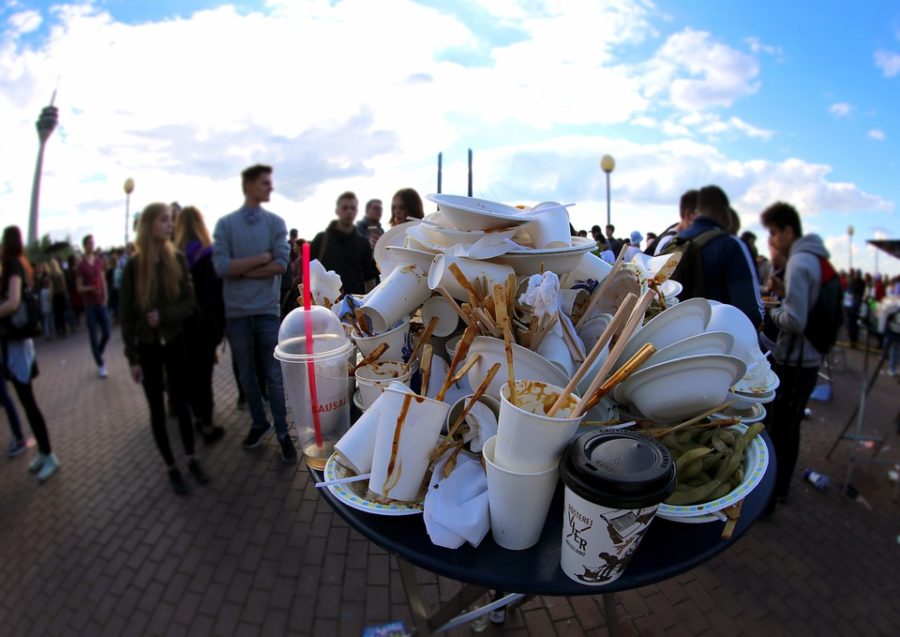 What do we want? Coffee. When do we want it? Now.

Starbucks churns through 4 billion disposable cups globally per year. Fast food restaurants feed 50 million Americans daily. Twenty percent of all American meals are eaten in cars. This paints a grim picture of the American diet and our environmental awareness.

“Time is money,” and “there aren’t enough hours in a day,” are common sayings drilled into us from a very young age. Quick and convenient becomes the mantra, as we attempt to cram everything into a 24-hour day.

It’s easier to grab a muffin than cook an omelet. Simpler to use sparknotes than to read the book. Faster to drive a car than to take the bus, bike or walk.

Convenience is beneficial in terms of quickness. But the fast-paced systems our society has created are detrimental to our health, education and most importantly, our environment.

Americans take countless everyday amenities for granted. However, the sense of immediacy, which has become core to our culture, comes with a cost.

Past generations fought for the right to vote and now we can’t even be bothered to show up to the polls.

Forty-five percent of adults didn’t vote in the 2016 election, leaving us with President Trump. According to U.S. census data, 15 percent were simply “not interested.”

The budget message of the president, which precedes the 2019 budget proposed by Trump, states, “America is back to winning again.”

Trump proposed to cut 40 percent of funding for the Office of Energy Efficiency and Renewable Energy. He also has goals of eliminating the EPA’s climate research program and the U.S State Department’s Global Climate Change Initiative, all while increasing spending on fossil fuels.

I wouldn’t call this “winning.”

We can no longer justify complacency with the cliche, “What can one person actually do?” It’s time to get involved through political reform, or at least to make more sustainable choices.

Not everyone is a part of the problem. There are individuals like environmental activist and blogger Lauren Singer, who’ve adopted near zero waste lifestyles. She fits all her garbage from the past five years in a single mason jar.

It’s centralizing in on issues which may seem insignificant at first.

Who would think about hotel’s unused complimentary soaps? Clean the World’s founder Shawn Seipler did. His company re-batches the unused toiletries and sends them to people in need. An international endeavor which is both humanitarian and environmentally conscious.

The local community is putting forth efforts as well. It’s as simple as being prepared and knowing what’s available.

Getting involved with campus clubs like EcoLeaders is a great place to start.

They promote awareness within the club and then go on to inform fellow students. “The importance of collaboration, young people with adults, it is possible we can work together,” said EcoLeader Caitlyn Thomasson in attempts to inspire more action within the larger community of Santa Rosa extending out beyond just SRJC. More changes come when a greater number of people are involved.

California is a highly progressive state in terms of environmental protection and SRJC is doing its part. A public rally is being held from 5:30-7:30 p.m. on March 22 in Glaser Center in support of CA Clean Car Act 2040. The assembly bill would allow only new Zero Emission Vehicles (ZEVs) to be registered in California beginning in 2040.

The fires that took Sonoma County by storm damaged wildlife habitats at the Pepperwood Preserve. EcoLeaders plan to assist the organization with its “Woodpiles for Watershed” event, where wood debris from the fires will be repurposed to help replenish lost vegetation from 10:30-1:30 p.m. on March 16.

SRJC’s second Sustainability Summit will be held from 8:30 a.m. to 3 p.m. on March 30. All students are welcome as SRJC sustainability leaders gather to discuss campus goals for upcoming years.

The school offers water bottle refill stations, priority parking in the Quinn parking lot for carpoolers and a bike repair station for students who ride. There are also more than 90 recycling bins positioned around the Santa Rosa campus

It’s unrealistic to expect everyone to attend every meeting or cut back to absolutely no waste. Nevertheless, small changes are still impactful.