Tarantino: Stuck In The Middle With You 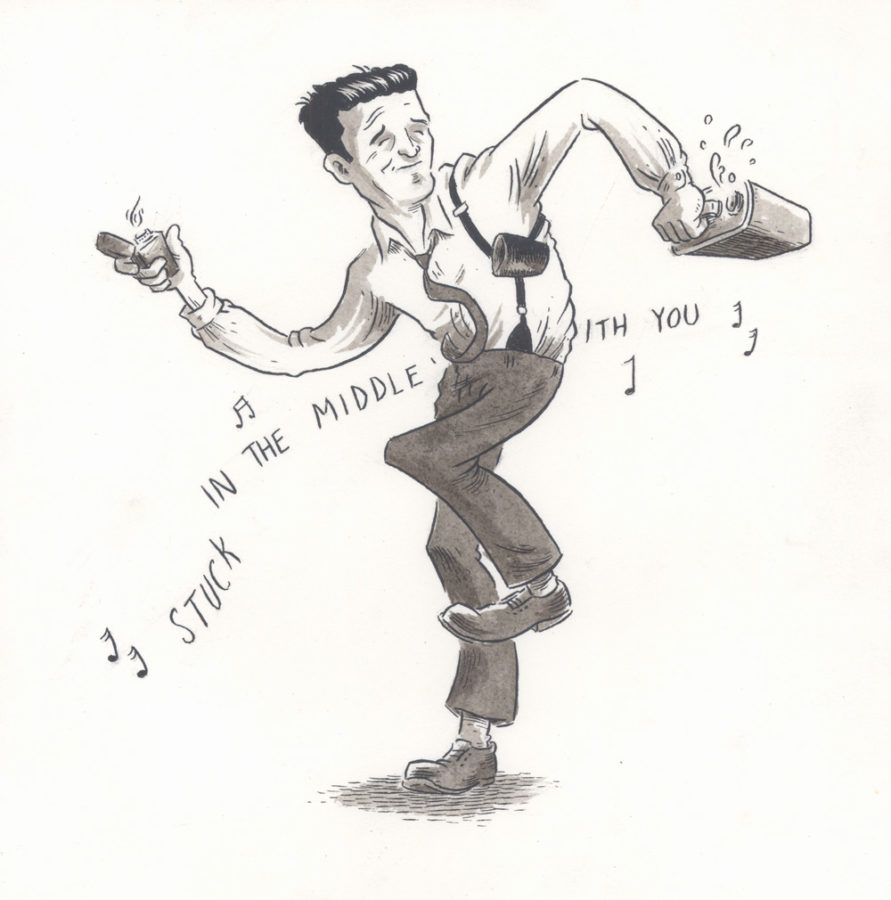 It’s clear. Hollywood has a problem with racists and rapists. One thing I would like to make clear: Quentin Tarantino is not one of them; despite what the growing fervor surrounding the director would lead you to believe.

I’m a male Tarantino fan, so my views are obviously biased—that’s what most people would tell me anyway. However, before you label me a defender of a deviant, malevolent and racist lunatic who “just doesn’t get it,” simply because I’m a man. Please, keep reading.

Tarantino’s an easy target. A weird-looking, hubristic, misogynist creep who fetishizes violence and has an affinity for racial slurs. Sounds like all the familiar symptoms of a demonic Hollywood maniac who must be exorcised at all costs by the righteous and almighty, which these days seems to mean anyone with a twitter handle.

Tarantino’s critics point to his work as obvious, irrefutable evidence of his transgressions towards women and people of color. Therein lies the irony.

It’s Tarantino’s work that stands out as the most obvious, irrefutable evidence to the contrary. You can point to any Tarantino film and see either a strong female character or a non-stereotypical person of color in a major role.

Tarantino’s third film, “Jackie Brown,” serves as the best example of this. The plot revolves around a strong, 44-year-old, African-American woman who outsmarts everyone and overcomes every obstacle in her path.

Not only was Tarantino successful in creating a convincing portrayal of a middle-aged female minority, he was able to convince a major Hollywood studio, run by white men, to finance a film featuring such a groundbreaking role more than 20 years ago in 1997.

Tyler Perry, an African-American director, doesn’t even do that. He just casts himself as the strong female character and apparently viewers are fine with that.

“Jackie Brown” is a female-empowerment film. It’s a film about a member of a severely marginalized group. It takes women, like Jackie Brown, out of the margins of society and places them front and center. This provides a platform rarely afforded to women and people of color on screen, much less a woman of color.

Granted, coercing Uma Thurman into performing several dangerous stunts against her will on the set of “Kill Bill” is reprehensible and wrong. However, the film is another example of female-empowerment in the director’s catalogue.

As Tarantino said in an interview with KRON 4 San Francisco, “This is a movie about women… not about cute girls… whose t-shirt’s stop before their belly buttons, asking permission to kick ass. These girls just kick ass, they’re warriors.”

Although “Kill Bill” is very much a man’s vision of what it means to be a powerful woman, it’s still a vision that is in short supply on the silver screen.

As the second part of the 2007 double-feature “Grindhouse,” Tarantino’s thrill-ride of an installment “Death Proof,” centers around a deranged Hollywood stuntman and two separate groups of women that tickle his fancy.

It’s a significant and sorely forgotten work of Tarantino’s. The film examines the dangers of the male gaze and toxic masculinity. In 2007 it came and went without much fanfare. In 2018 it’s an extremely relevant film in today’s social climate of the gender-inequality power struggle.

The film features an immensely satisfying ending, largely because the audience gets to witness the power and retribution exacted by the film’s female characters that women are rarely afforded on-screen and in real life.

The film is also noteworthy for passing the Bechdel Test, what some refer to as “the feminist film test.” The Bechdel test states that to pass, “…a movie must have three things: at least two female characters (preferably named), these characters talk to each other, when they talk to each other it is about something other than a man.” The women in “Death Proof” do a lot of gossiping about men, but they also hold a lot of conversations where a man is not the primary focus.

In Tarantino’s most recent film, Jennifer Jason Leigh’s character Daisy Domergue in “The Hateful Eight,” suffers a brutal onslaught of physical and psychological punishment throughout the majority of the film, but she’s one of the stronger roles in the film and arguably dishes out the most punishment when it comes time for the end credits.

Tarantino consistently features women in significant, strong roles. Few of his contemporaries can make the same claim with their body of work. To me, this would be nearly impossible for a so-called misogynist to do.

The fact that he’s still being accused of being a racist is comical, disappointing and irresponsible. Again, take a look at the man’s work.

In “Reservoir Dogs” the character, Holdaway, played by the African-American Randy Brooks, stands out as one of the only altruistic characters in the film who isn’t morally corrupt. This is a theme that has carried over throughout Tarantino’s career.

Take it from Samuel L. Jackson. “I don’t understand why [people] can’t look at his work and realize that every character he’s ever given me has pretty much been the smartest character in the film. That has the most dignity and respect… and for him to write characters like that for me, would be impossible for a racist to do.”

I agree that Tarantino is a weirdo with a foot fetish. That his films are hyper-violent and self-indulgent. That he’s an egotistical asshole who says and does questionable things. But Tarantino is by no means a misogynistic racist.

He’s not Harvey Weinstein. He’s not Louis C.K. He’s not Woody Allen. Unfortunately, for now, he’s somewhere in between.

As a male fan of his work, when it comes to Tarantino, like the Stealers Wheel song made famous in Tarantino’s “Reservoir Dogs” states, “Here I am, stuck in the middle with you…”