Entomophagy: The next buzz in food 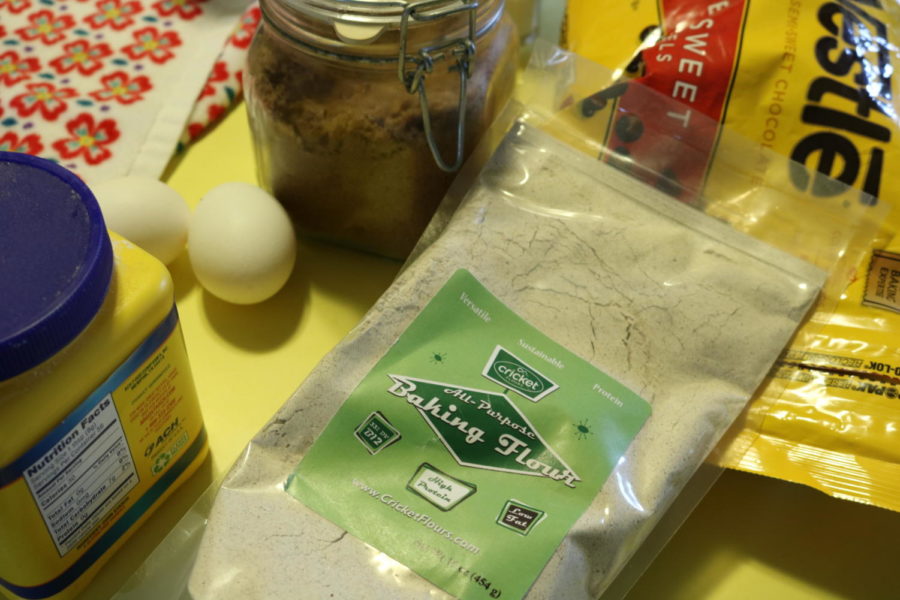 Cricket flour made out of wheat flour, malted barley flour and cricket powder.

Did you ever think insects would be the next main food source for the world? Insects contain high amounts of vitamins and protein, while their carbohydrate and fat levels are low. They are a sustainable food source and can be raised quickly in your home. However, many people aren’t ready to make the change from conventional meats to insect products, despite the copious benefits entomophagy has to offer.

Entomophagy the consumption of insects is practiced throughout Asia, Africa and South America often as a secondary source of nutrition.

It’s a food source that some historians believe to be a part of paleo foods. Paleo foods are foods from the Paleolithic Era, when hunter-gatherers lived with well-developed stone tools and weapons. The paleo diet consists of: nuts and seeds, fish, fruits and vegetables, eggs and grass-fed meat.

As the human population continues to increase, we must find alternative food sources that are sustainable and affordable than traditional, factory-farmed meats.

Certain insects have distinct flavor profiles and can take on hints of what they eat or what they’re cooked in.

Bugs can be toasted and ground into flour to make various baked goods packed with nutrition, so if legs and antennae are a dealbreaker, there are still options.

If you don’t like your veggies, try bugs. Insects are not only tasty but are good for you because of the varying nutritional benefits.

For instance, crickets have 31 grams of protein per 200 calorie serving, while beef has 22.4 grams. While this isn’t a huge difference, the amount of fat in crickets is also lower than in beef— 8.1 grams to 11.2 grams of fat.

While insect consumption can benefit health, it can also help alleviate the impact that livestock production has on the environment.

If more people changed their meat-based diet to an insect-based one, the need for large scale, factory-farmed meats would diminish. This is beneficial because factory farmed meats are extremely detrimental to the environment.

Factory farms need vast amounts of resources to yield small amounts of product. It takes up to 52 pounds of grain, more than 260 square-feet of land and about 1,840 gallons of water to produce 1 pound of beef. Insect meal could be the next best feed for livestock.

Dismantling factory farms is beneficial to lowering the amount of livestock produced, which may lead to better treatment of animals in general. To “harvest” livestock, workers must “dispatch” the animal before processing the meat. This is usually performed with a bolt pistol placed at the base of the animal’s skull.

About nine percent of U.S. adults identified as strict vegetarians or vegans in a 2016 Pew Research survey on American eating habits. Many of these people believe factory farmed meat is unethical and inhumane because of the conditions livestock are kept and how the animals are treated leading up to dispatching them.

While insects lack nociceptors (pain receptors), entomologists have discovered that fruit flies have pain receptors, which may be true in all insects. Still harvesting insects causes little-to-no pain and suffering to the creatures because they are gradually frozen rather than violently killed.

Nevertheless, entomophagy allows for a better understanding and appreciation for life, food and the process behind raising and harvesting one’s own sustenance. You will know where your food is coming from if you raise insects on your own.

Raising your own food allows humans to be reconnected to the process of gathering food. It also eliminates the barrier that factory-farmed meats have created, where people tend to become desensitized to the practice of mass production for food.

More and more people in the U.S. are catching onto the convenience and novelty of entomophagy. Don Bugito, a San Francisco-based, prehispanic snackeria serves an assortment of savory and sweet insects.

Micro-farm containers can easily be made from plastic trays with chicken wire bottoms in stacked layers to hold all the stages of an insect’s life cycle. You can harvest your product whenever you need, and these containers are often small enough to be placed on your countertops.

I tried my hand at entomophagy for the first time about five years ago. I was on Youtube and somehow came across entomophagy related videos and was fascinated by it. I did not change my diet to be based solely on insects, but I did cook a few dishes with crickets to experiment.

I bought some feeder crickets—the ones you give to lizards—and purged their systems for a few days by feeding them fresh fruits and vegetables. Crickets have a mild, nutty, earthy flavor, absorbing the flavors of the seasonings they’re cooked with, as well as what they’ve been grazing on.

Before preparing the crickets, or any insect, it’s best to freeze them. Freezing is the most humane way to dispatch insects because their nervous systems naturally slow to conserve energy and it will eventually put them to “sleep.”

With the world population set to hit nearly 9 billion by 2050, what will you do to help the environment?

As a reminder, not all insects are edible. Do not forage for your own bugs. It’s recommended to purchase from online sites that sell live feeder bugs.