From the ashes we will capitalize 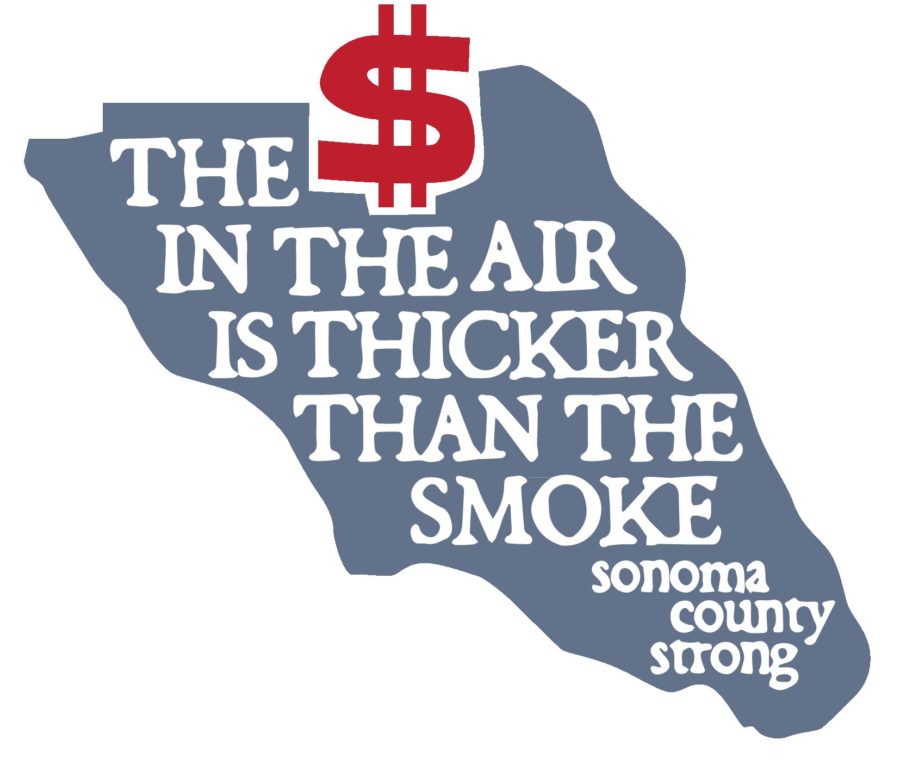 Like every major Hollywood disaster movie, every major natural disaster isn’t complete without an effective tagline. The tagline must be equal parts inspirational rallying cry and shrewdly marketed advertising catchphrase.

After Hurricane Harvey drowned the city of Houston, the country was flooded with the phrase, “Houston Strong,” along with shirts, hats, koozies and pendants for sale all bearing the slogan.

Following the North Bay wildfires, Sonoma County not only adopted the “Sonoma Strong” catchphrase, it doubled down with a unique rallying cry all its own: The love in the air is thicker than the smoke. For a time, it appeared as though this sentiment rang true with such an overwhelming amount of support permeating throughout the community. That time has come and gone.

Like a good disaster movie, Sonoma County found a loyal audience unable to resist the drama of the North Bay wildfires. And like a good disaster movie, when the smoke clears and the end credits have finally rolled off the screen, that’s the time when the merchandising opportunities begin to roll in for the disaster that is “Sonoma Strong.” Brought to you by those with an entrepreneurial spirit and a truly “American” sense of capitalist vision.

“Sonoma Strong” stickers, shirts, hats, tote bags and jewelry can be found all over the community and online. These one of a kind collector’s items can be yours for as little as $5 and the worst part is, the majority of the proceeds will never go to those who need it most: the victims of the wildfires.

Thankfully, most items for sale associated with the wildfires are generating funds directly supporting wildfire victims. Santa Rosa native Mikayla Butchart’s “ROSE-ilience” pin generated more than $20,000 in funds, all of which will go directly to wildfire victims. Unfortunately, not everyone is guided by the same moral compass. After all, this is America, baby. Land of the free, home of the paid.

The profit to be made from a tragedy like the North Bay wildfires is seemingly endless, infiltrating multiple layers of society. Price gouging is to be expected on essentials like food, water, gasoline and housing whether we agree with it or not. There’s even a case to be made on the fact that price gouging after disasters is good for the economy.

Corporations capitalizing on a tragedy for monetary gain is one thing, members of a community affected by a tragedy who choose to capitalize off if it is another.

If you’re selling “Sonoma Strong” merchandise for the explicit purpose of making a few extra bucks for yourself: stop, now. You are doing favors for no one, not even yourself.

Instead of attempting to re-coupe the production costs that went into making your version of “Sonoma Strong” memorabilia, why not just donate that money to wildfire victims to begin with?

With so much misinformation floating around, it’s all too easy for a well-mannered yet ill-informed person looking to donate to wildfire victims to purchase a “Sonoma Strong” T-shirt or sticker that doesn’t benefit wildfire victims.

A community left in turmoil by a natural or man-made disaster should not be treated like a commodity for financial gain. Sonoma County is not an amusement park and the North Bay wildfires are not a series of roller coasters patrons can ride and have their pictures taken to buy as souvenirs when exiting through the gift shop.

The challenge facing Sonoma County in the years to come is the massive rebuilding of a community on the edge. But, hey, it’s fine. We’re “Sonoma Strong.” You can buy a shirt and a sticker to prove it.