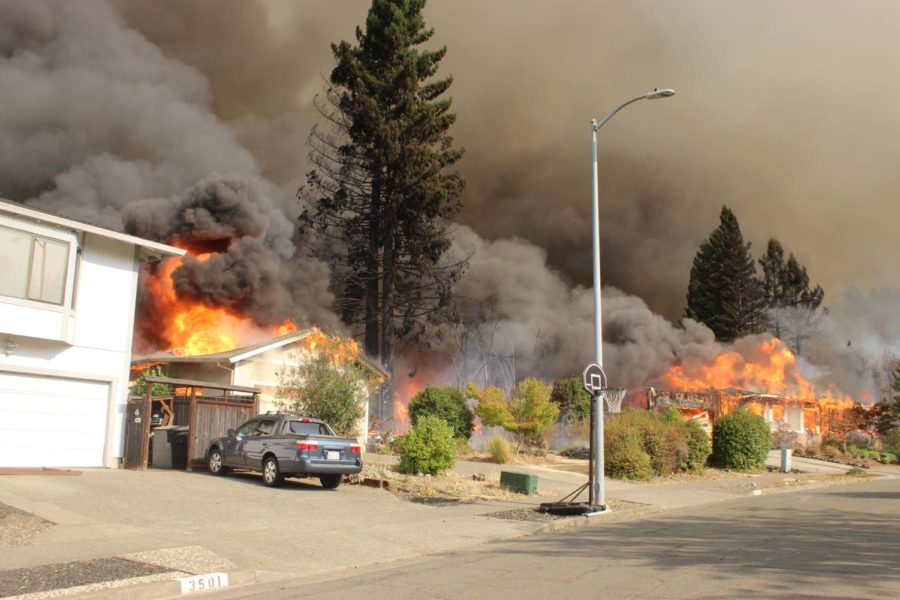 I didn’t believe my roommates when they woke me to tell me we were advised to evacuate on the morning of Oct. 9. When reality set in, I was torn between the desire to follow my friends to safety and the compulsion to grab my camera and enter the fray. I knew whatever was happening was big, and I’d never forgive myself if I didn’t do my best to cover it.

Without cell service or radio, I only knew the fire was north, so I headed North before being stopped by police. At this point I didn’t know the Oak Leaf press pass I had in my camera bag could have gotten me through police barricades.

I photographed Journey’s End burning from the Kaiser Hospital parking structure before heading to the Veteran’s Memorial Center to interview disaster relief personnel and get my bearings.

It was there that I ran into Oak Leaf’s Co- Editor-in-Chief Ali Benzerara. Driving my worse-for-wear ‘03 Honda CRV to Coffey Park and Fountaingrove, we periodically posted our footage on Facebook or sent it to our managing editor, Albert Gregory.

When we reached Hidden Valley, it was in a state of anarchy. Firefighters were spread thin as the fire encroached on houses bordering the forest. The heat was remarkable and the scale of the destruction difficult to contemplate. Scattered residents who had refused to evacuate desperately hosed down embers as neighboring homes yielded to the fire. Many homeowners seemed to successfully keep the fire’s spread at bay and save their homes with garden hoses.

We saw an entire neighborhood reduced to ruin, flames having moved on to homes in other areas leaving only broken gas lines spewing fire over mounds of grey desolation. We understood the tragedy of what we were covering.

For the next two weeks eight Oak Leaf staffers, including Ali and myself, chased fires up and down Sonoma County. Accurate information was in short supply among our neighbors in Santa Rosa, especially in the first few days.

The bravery and dedication we saw from first responders was inspiring. We made one rule during our forays: don’t get in the way.

Each day we learned from the mistakes we made reporting the day before. We had no delusions of grandeur, and we knew our coverage was amateur at times, but we felt what we were doing was important. Sometimes that just meant passing the barricades to check on cities and neighborhoods our friends had heard were destroyed, other times it meant entering dangerous areas to get close-ups of the fires, against our advisor’s wishes. We informed our families, neighbors and Facebook friends what we learned each day.

I kick myself for not volunteering or doing more to help those affected during the first weeks of the fire. I’ll admit there was a thrill to passing through police barriers and exploring uncharted territory. Still, I believe in what we did and I’m proud of the hours of hard work my classmates put into covering these historic fires and what we’ve produced. It’s my hope that, even in a small way, our reporting will help to document this event and drive the conversation in a positive direction as our community moves towards healing.