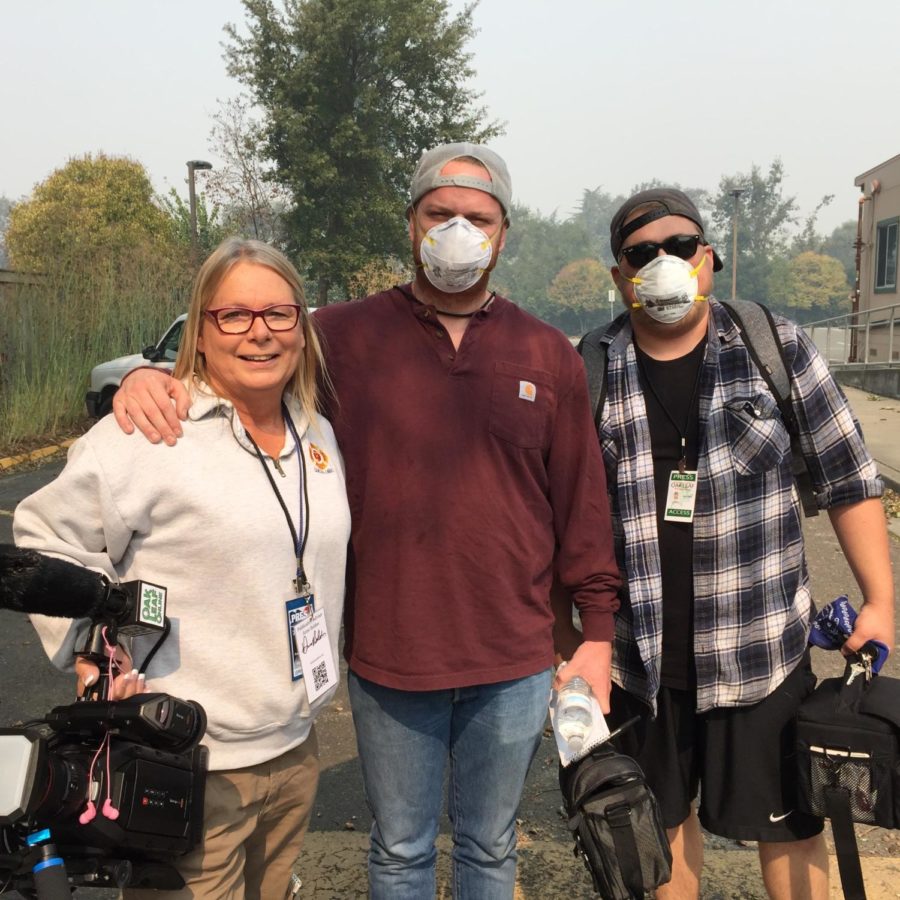 When the Tubbs Fire struck the city of Santa Rosa late on the night of Oct. 8, the city was literally torn apart, thrusting its citizens into peril.

The Oak Leaf staff was not spared this terror. Many of our staff were evacuated from the fire, including one of our co-editors-in-chiefs, James Wyatt, who lives in the Wikiup-Larkfield neighborhood. Wyatt and four other staff members were forced to evacuate their houses.

While the fires still raged that morning, two of our staff, driven by their journalistic instincts went to the Veterans Memorial Building evacuation center. The Oak Leaf’s Co-Editor-in-Chief Ali Benzerara and News Editor Brandon McCapes saw each other, realized they needed to team up and went out into the unknown dangers waiting for them in the city.

Meanwhile the rest of our staff was either being evacuated or staying with their homes and families, anticipating the next waves of mandatory evacuations that would be soon to follow. Many of us had no idea two of our reporters had decided to go into the field to cover the catastrophe burning around them.

When they were finally able to get service, they began sending the photos and videos to managing Editor Albert Gregory, who lives in Petaluma, safe from the fires. As their photos and videos began to pop up on our website, theoakleafnews.com, in addition to our Instagram and Twitter feeds, other staff writers became inspired and awoke from their daze. They knew they needed to help.

As service became more available we reached out to each other and 10 of us met at The Oak Leaf Newsroom, even though the campus was closed and we were technically not allowed to enter. But we needed access to our equipment, so we briefly met and planned our day.

Benzerara and McCapes continued their harrowing coverage of active fires, getting the attention of major news sources like the New York Times. Wyatt and Gregory went out to cover the devastation in Fountaingrove, Coffey Park and more, along with Co-Features Editor Michael Barnes, our adviser Anne Belden and our skilled videographer Roberta Mcintyre.

That’s how the next week continued to unfold. We were kicked out of our newsroom by SRJC Police but continued to meet at our advisor’s house in Sebastopol and Edelstein’s house in Santa Rosa, closer to the destruction.

We would meet, break off into groups and venture out trying to cover every aspect of the fire we could. Not all of our staff was able to help because they were experiencing the same stress and terrors many of you reading this faced, but over the next two weeks a core group was established including Benzerera, McCapes, Wyatt, McGranahan, Edelstein, McIntyre, Barnes and Gregory.

This was easily the greatest learning experience an aspiring journalist could have. Many reporters will go their entire careers never covering a disaster of this magnitude. We learned on the fly proper techniques and skills that will assist us the rest of our lives. We faced our fears whether it be literally walking into a fire or talking to those who had lost everything.

Although our adrenaline was flying high through most of the experiences, at the end of each day we struggled to upload all of the material we gathered, at times, questioning whether all of our hard work was going nowhere. Unfortunately, we do not have the resources of a big media outlet and looking back we would’ve done anything for a team of copy editors waiting hand and foot.

That’s where our adviser stepped in. She organized us and put a priority on making our content available, especially on social media. A lot of help came from our Peer Assisted Learning Specialist Devin Schwarz, who remained posted at his home, continuously editing videos and articles for us while we reported from the field.

Though we were just classmates before Oct. 8, we were transformed into a cohesive team, united by a common desire to bring our fellow students a comprehensive report of the fires from our perspective. We will never forget the experiences we shared during this tragedy nor will we forget the people we talked to, the devastation we saw and the love we felt as Sonoma County residents demonstrated their strength and did everything they could to not let this fire define them. We will forever be #SRJCstrong #SRJCfuerte.