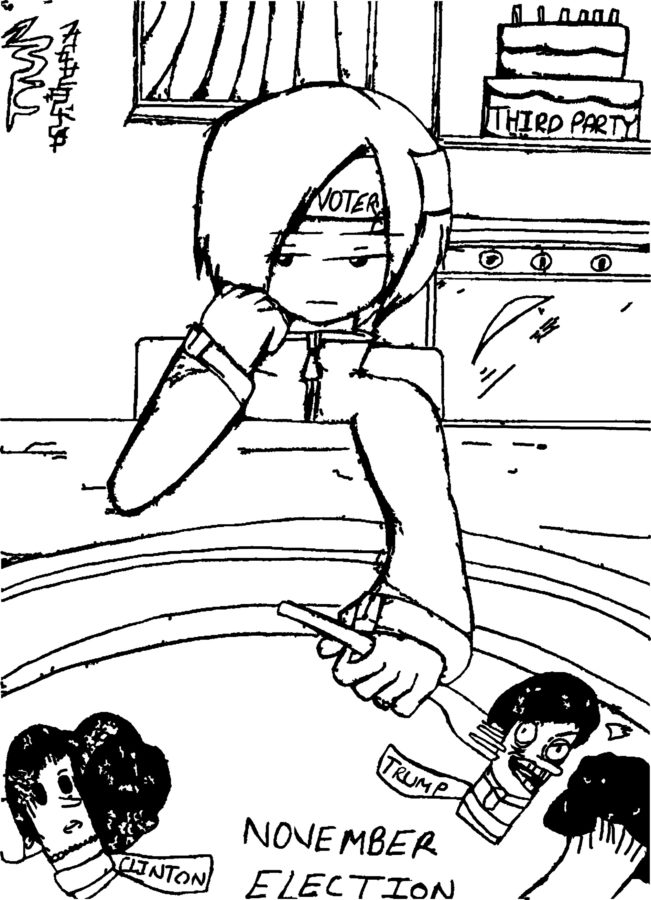 Our greatest right as citizens of the United States is to vote for our commander in chief. Our voice. Our President.

But when this infinitely important decision is reduced to a choice between the lesser of two evils, has the system failed? Are our rights infringed? And is it possible to change this chronically unfair system to allow a legitimate third-party option?

The 2016 presidential election has been a roller coaster, and it’s far from over. Donald Trump, the joke prospect turned legitimate candidate, and Hillary Clinton, the liar in a sea of controversy, liked only by the party bigwigs, are now our only real options.

Jill Stein of the Green Party and Gary Johnson of the Libertarian Party jumped onto this sinking ship with nothing but a Dixie cup to bail the waters of political corruption. Statistically, these candidates have no chance of winning. They merely serve as a well-placed distraction for “Clump” to hide behind.

The silver lining of this tumultuous election is the exposition of a massive flaw in our two-party system, one that good ol’ Mr. Washington warned us about so many years ago. Our two-party system doesn’t work. Our parties divide the country and create false rivalries in a system that should be supportive and encouraging to outside candidates with new ideas. This system also encourages both politicians and citizens to have strong views that match their “team” instead of allowing individual thought: Republicans like guns, Democrats like pot, etc.

So what are we to do? This election is in many ways already bought and paid for, but this isn’t to say there’s no hope for the future. Over the next four years, it is our duty as conscientious Americans to establish a powerful third party to keep the donkey and elephant in check. It does not matter whether this party is founded by Bernie and is socialist in nature, or by Al Gore with a green tint; it does not matter. Anything but these two superpowers will give much-needed balance to the scale.