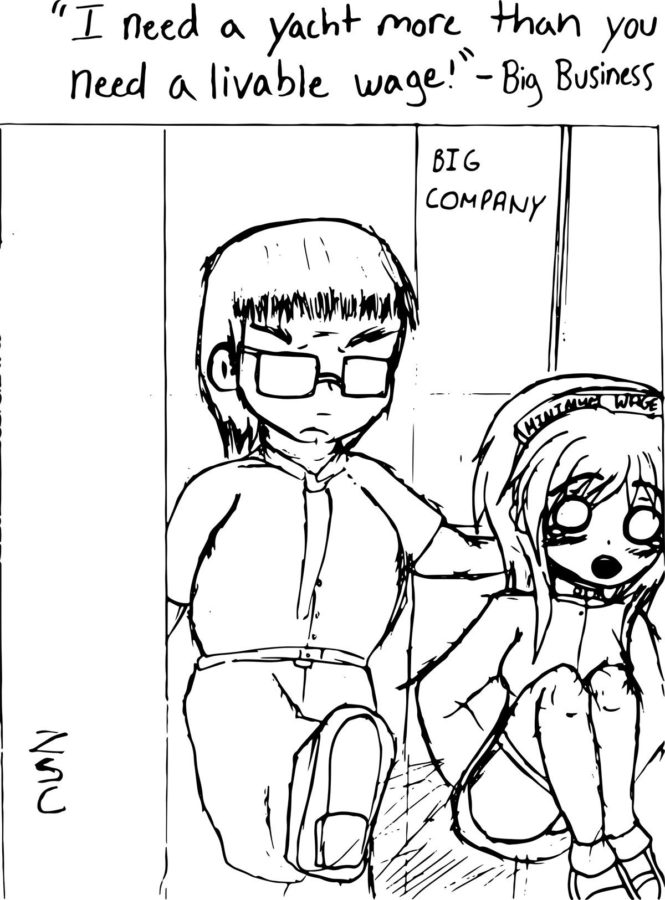 A minimum wage increase to $15 sounds great to Santa Rosa Junior College students who make low wages and can barely scrape by. Yet the issue is more complex than a quick pay raise.  Worries about company-wide lay-offs and a rise in daily expenses create a debate over whether the minimum wage should go up.

On March 31, California legislators passed a bill to increase the state minimum wage in increments of $1 a year to $15 an hour by 2022. Gov. Jerry Brown signed the bill into law April 4.

This law is retroactive, meaning those already making the new minimum wage will also receive a wage increase due to the ripple effect.

In the past, hikes in pay would create more problems for those making just above minimum wage because their cost of living would go up but their pay would not. This new law ensures these people won’t be left in the dust.

Some Californians worry that businesses may raise prices to compensate as minimum wage increases, defeating the bill’s purpose.

While it’s understandable for small businesses to adjust prices to make a profit, large corporations could stand to take a cut from their checkbooks. For this bill to be beneficial, wages need to be relative to the cost of living.

While increased expenses and relatively unequal payrolls are major concerns for citizens, one of the major debates looming over the inevitable wage growth is the fear of rising unemployment. This argument isn’t unfounded. It makes sense that employers will hire fewer workers or move employees down to part-time to save money on labor costs. Some corporations are too greedy to care about families living in poverty. But that doesn’t mean California can’t establish livable wages.

There isn’t a consensus on whether a minimum wage increase actually raises unemployment, only predictions. Predictions of a bump in unemployment are based on past incidences of states raising wages. But California is different.

Although unemployment might not be affected, it is more expensive to live in California than almost any other state. Data from the Bureau of Economic Analysis shows $15 buys much less here than it would in most other states. In Oregon one would only have to spend $681 on rent to match the value of $1,000 rent in California.

The millions of Californians currently earning minimum wage will see an increase in annual wages from $20,000 today to $30,000 by 2022. While this sounds like a nice pay raise, the earning might not even out six years down the road. The cost of living could grow even higher by then, and that’s a problem for Californians living in high-cost areas, like Sonoma County.

The Massachusetts Institute of Technology’s Living Wage Calculator estimated the required annual income for a single adult in Sonoma County is currently $24,843. An adult with one child requires more than double that figure.

This statistic may seem scary to the minimum wage worker in Sonoma County, as it seems the new wages will not have much affect once inflation kicks in.

Students at SRJC, many of whom work part or full-time minimum wage jobs, might still have the same money worries if the cost of living rises faster than it takes for the new wages to set in.

Scholarships, the BOG waiver and federal aid are available for students here, but they’re not guaranteed. Desperately applying for various scholarships on top of going to college and working to afford rent, food and school supplies lends to the typical stressed and broke college student.

If this minimum wage increase is going to help working SRJC students, the cost of living in Sonoma County must either stay constant or, by some miracle, go down. We need wages to grow faster than the cost of living; otherwise this fighting for a pay raise will be for nothing.

Of course there are always trade-offs when it comes to such laws. But giving individuals livable wages and raising families out of poverty far outweigh the risk of businesses having to make a few small cuts from their own checkbooks; as long as everything remains fair.