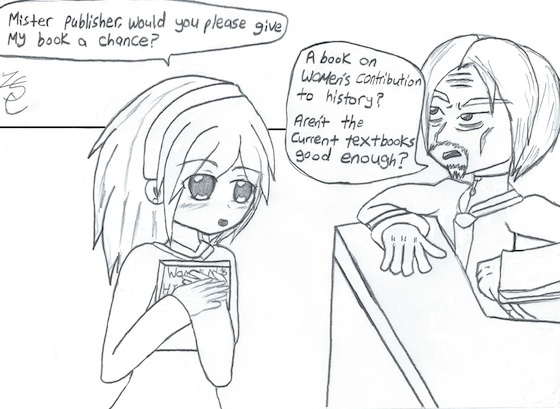 Though we have a full month dedicated to the accomplishments of strong, powerful women throughout history, there is still an overwhelming lack of representation of women in history textbooks. Women’s contributions and accomplishments should be a part of the general history curriculum instead of being segregated and diminished.

While we’ve been slowly filling in the gaps with women’s history classes, these are generally only offered at the college level. And while history is usually a requirement to graduate, women’s history is not. Additionally, many students don’t know, or even care to know, about the women who have shaped society.

Throughout history, women’s struggles and accomplishments have gone unrecognized. A prime example is Rosalind Franklin’s contributions to science through her X-ray photographs of DNA. Franklin and fellow scientist Maurice Wilkins were both working on a DNA project in the 1940-50s, though he only saw her as a technical assistant. They were both peers in the scientific community, but Franklin was left out of social interactions with her male counterparts. Only males were allowed in London’s King College dining rooms and her colleagues went to men-only pubs.

Not only was Franklin excluded from interacting with her male associates, but her work also went unrecognized. If it were not for her photographs of DNA, Francis Crick and James Watson could not have completed their work on DNA’s double-helix model, which they both won Nobel Prizes for in 1962. Without the understanding of DNA, the field of forensics wouldn’t be where it is today. There wouldn’t have been advances in paternity identification, blood and organ transplants, fingerprinting or evaluation of evidence left behind at crime scenes.

Franklin is one of many women who went unnoticed. Significant women remain overlooked because of the lack of information distributed about them.

When women are noted in history books, their roles are often diminished or are seen as incompetent.

Take, for example, Pocahontas. In the Disney film she is portrayed as an independent woman until a white man, John Smith, comes into the picture. From then it became a love story instead of focusing on her accomplishments bonding the Powhatan Native Americans and the Jamestown colonists. While she saved John Smith, she wasn’t in love with him like Disney led their audience to believe. Pocahontas was taken hostage by an English captain and traded for numerous supplies. Jamestown governor Sir Thomas Dale and her father gave her up for marriage to colonist John Rolfe, leading to a period of peace between the Natives and colonists. The depiction of her, omitting her struggles and successes, makes it seem like the only significant part of her life was falling for a man, and most history books don’t mention her at all.

Our history books should be telling us the full, true story of Pocahontas, among all great women leaders and pioneers.

There are only two women’s history courses available at Santa Rosa Junior College with three time slot options between both classes. One of the courses, history 18.1, has just four male students out of the 35 total enrolled. This shows the disappointing lack of male interest in women’s history on our own campus.

We can’t ignore half of the world’s population.

Our society would not be where it is today without the accomplishments of women. It’s important to represent each sex equally and not only focus on men’s accomplishments.

If we want people to be engaged in women’s history, then we need to integrate women’s history into public education systems to get students interested in prominent women. Students can’t be interested in something they know nothing about. Education is our greatest weapon against misrepresentation.