Editorial: Society needs to stand up against rape culture 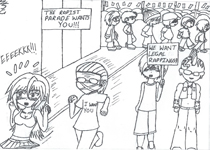 While couples celebrated Valentine’s Day, dedicated members of the Santa Rosa community gathered at Old Courthouse Square to march towards Santa Rosa Junior College to speak out against rape culture.

A week before this uplifting march, a pro-rape rally was to be held in San Francisco 60 miles away. This was one of 165 meetings in 43 countries where heterosexual males were supposed to come out of the shadows in support of legalizing rape on private property.

In no way is rape ever acceptable. It is a violent and unforgivable offense. Consent is a basic human right every person deserves.  People should have full control over their own body.

Daryush “Roosh V” Valizadeh, founder of a misogynistic blog “Return of Kings,” encouraged men to step out from behind their computer screens stating that they no longer had to hide.

On his blog, Valizadeh claimed society is approaching rape culture all wrong and rape would be eliminated if it weren’t punishable by law.  “By attempting to teach men not to rape, what we have actually done is teach women not to care about being raped,” Valizadeh said.

This is a ludicrous statement because society has told women their whole lives to protect themselves through buddy systems or by carrying pepper spray.  There are various self-defense classes available as well as escort programs to help women fend off these attacks, yet there has never been a nationwide program to teach men not to rape.

Women are taught to fear strange men from a young age. It is ignorant to say we have taught women not to care about being sexually assulted because society has made it a woman’s priority not to get raped instead of making it a man’s priority to not rape.

Valizadeh is not eliminating rape; he’s simply making it easier for dirtbags like himself to take advantage of women. “If rape becomes legal under my proposal, a girl will protect her body in the same manner that she protects her purse and smartphone,” he said.

This is comparing women to objects and seeing them as less than human. He’s not protecting woman with his idea of legalizing rape; he’s demeaning them.

The sad reality is that Valizadeh is not the only man who thinks this way. It was only 22 years ago that marital rape became illegal among all 50 states.

Throughout history women have had to fear men like him who think it’s OK to take advantage of them.

Luckily, there were more people outraged by his outlandish statements than in support of it. Valizadeh cancelled the rallies three days before the events took place due to public outrage and threats.

Locally, students and community members have gathered together in a march to combat these deplorable ideas of pro-rape. Sonoma County’s second annual “One Billion Rising” event showed our community has no tolerance for sexual violence against women.

In California, Gov. Jerry Brown signed a “yes means yes” bill into law in 2014 clearly defining affirmative consent. This campaign, unlike the “no means no” campaign, protects women who can’t give consent, whether they’re intoxicated, unconscious or unable to say no.

While Americans have fought for freedom of speech, these pro-rape rallies are not protected under the First Amendment because they are inciting a breach of the peace. To counteract “Return of Kings” rallies and the people in support of them, we should encourage more education in schools focused on consent and respect.