Editorial: Pushing the boundaries of a nation’s trust 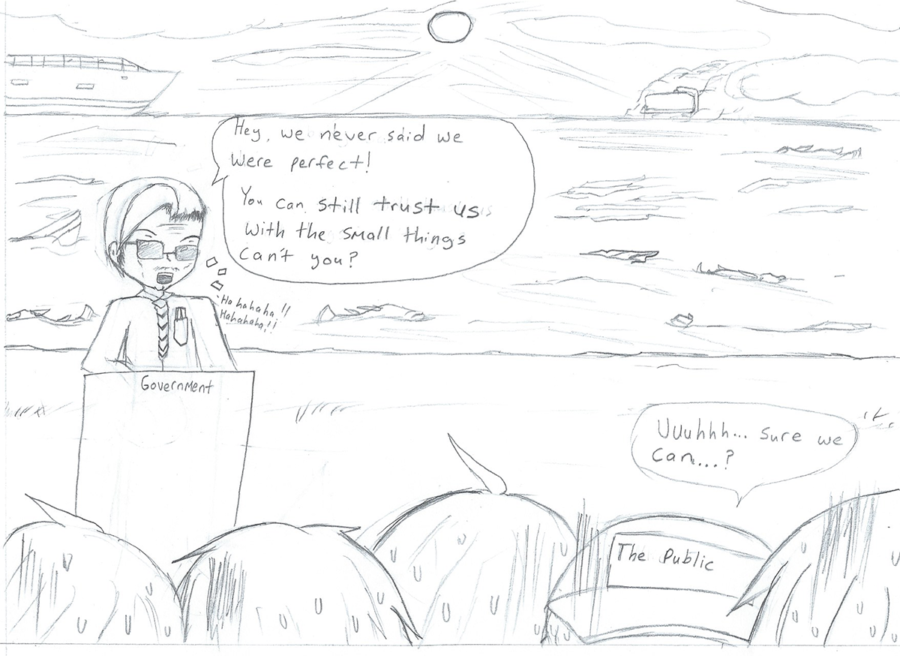 While this phenomenon is nothing new, recent public distrust rapidly turned to wariness of health department officials, and justifiably so. Due to tragic events in Michigan, and more recently in California, citizens are becoming concerned with their environmental safety and weary of what health officials are telling the public.

On April 25, 2014, the city of Flint, Michigan made the cost-saving switch from using Detroit’s water system to taking water from the Flint River. Soon, people started having concerns about possibly harmful bacteria in the water due to its taste, color, odor and subsequent reports of rashes. The city government responded with a news release: “Flint water is safe to drink.”

Since the switch in water usage, 10 residents have died from Legionnaires’ disease and thousands of children been diagnosed with lead poisoning from water nearly 900 times the EPA recommended limit for lead particles.

But the most far-reaching concern is the spiraling distrust in local, state and federal officials.

Nearly two years went by as  city officials and state regulators downplayed the lead levels and insisted the water was safe.

Not only is the city outraged by officials’ initial denial and delayed response to the situation, but the nation is growing evermore skeptical of public officials, and probably with good reason. How can you trust officials who say “everything is fine” when people are dead and children have lead coursing through their blood?

The public distrust of local government agencies and health officials spread out from Michigan to California, where the common perception is the state has strict environmental safety guidelines protecting its citizens. But since the tragic events in Flint, even California residents have grown suspicious of public agencies’ pandering.

A Southern California Gas Company natural gas reserve in Porter Ranch has been emitting greenhouse gases into the air since late October of 2015, provoking nearly 3,000 families to evacuate their homes. Even though thousands suffered side effects including headaches, nosebleeds and vomiting as a result of the strong-smelling gas, health officials who tested the air quality deem it safe and insist there are no long-term health effects. But residents haven’t been quick to believe the public officials’ reassurances and instead grew more frustrated with Gov. Jerry Brown’s delay in declaring a state of emergency Jan. 6.

Out of 21 Santa Rosa Junior College students interviewed, only three said they still trust  California officials. Nine said they trusted authorities in general in the past but are more skeptical now after the Flint and Porter Ranch incidents, and nine said they’ve always been skeptical of state and federal officials.

Even in California, where we’ve taken pride in our government’s health and environmental safety standards, caution is mounting and trust is depleted  among the public. Without the foundation of public trust, a nation could crumble into anarchy and revolt. Conditions are ripe for such a revolution if public agencies continue to hide their mistakes and push the boundaries of peoples’ confidence in their officials.

If SRJC students, among the rest of Sonoma County residents, wish to avoid incidents such as the Flint water crisis, it is imperative to stay informed and get involved with local government policies and agencies like the Russian River Watershed Association, which we need to hold accountable for the treatment of the watershed several cities rely on.

In Sonoma County, agricultural interests often conflict with human interests where water quality and availability are concerned; therefore it’s crucial for citizens to take part in legislation regarding water use to ensure fair distribution of this basic commodity.

The people of California and Michigan, as well as the rest of the nation, demand and deserve complete honesty and transparency from their public health departments and other agencies that have a duty to keep us safe and healthy.