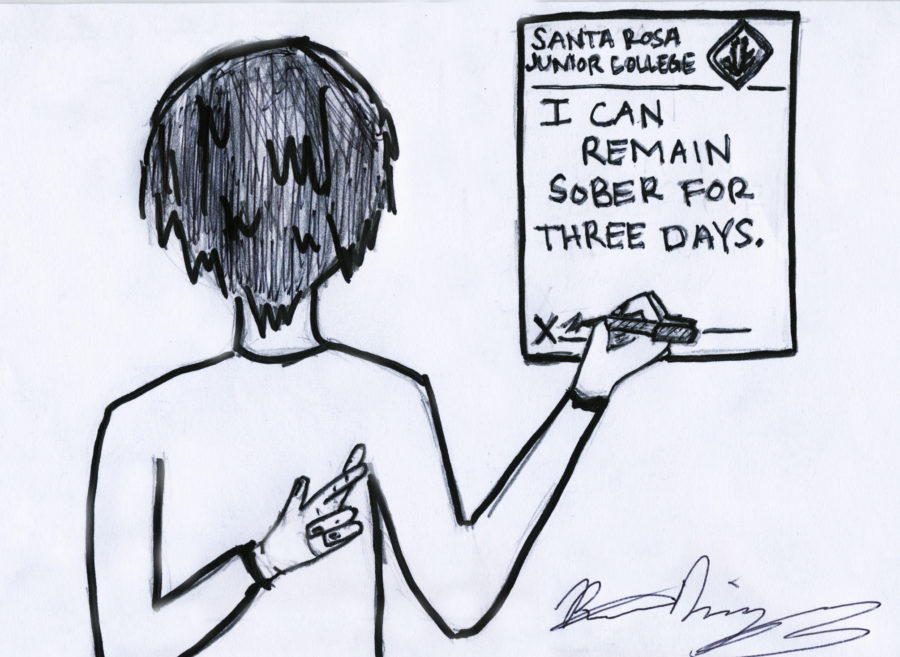 In what amounts to predictable circumstances, an inappropriate use of alcohol embroiled four student representatives in misconduct hearings, which have already justly resulted in removal from office and pay suspension.

Such scandals routinely garner eye rolls and exasperated sighs of ‘who cares?’ And in truth, they can be harmless, but they can also be ruinous, both for the students and the institutions liable for them. These situations are serious, and therefore, college communities should hold culpable students proportionately accountable.

This specific controversy is straightforward: seven Santa Rosa Junior College delegates attended a three-day student government assembly in Sacramento this November, and one evening, representatives from other California colleges gifted them some light alcohol, which they took back to a hotel room and four of them allegedly consumed.

Two of the four suspect students publically confessed and apologized for their part in the misconduct Nov. 23 in the Student Government Assemblies’ public hearing, while one suspect denied consumption, but admitted a week later to at least having a sip of beer, and another was absent from the proceedings and declined to comment if he drank. Two of the suspect delegates are under 21, including the one denying complete involvement.

Like any judicial process, particulars are key. Before the conference, the entire SRJC delegation contractually agreed to not drink alcohol for the three days they were in Sacramento. They were also aware the college was liable for them for that period. To exacerbate matters, the delegation used student representation money to finance the trip. These funds originate from a student enrollment charge. This information alone mean the delegates’ alleged actions constitute wrongdoing. The guilty parties disrespected the students they represent and exploited the administrators who were legally responsible for their safety.

Their actions breached principle more than they endangered physical well-being. According to witness testimony, the suspect students collectively drank around eight bottles of Mike’s Hard Lemonade and Sierra Nevada Beer. If the three to four individuals split this over the course of several hours, it would not likely have rendered serious intoxication, due to low alcohol content. They also claimed not to have left the hotel while drinking, meaning no one drove or wandered on foot into public. One of the defendants said the group did not finish all of the alcohol and another, who disputed fully drinking, testified to have poured a beer over the hotel balcony.

The quantity of alcohol and the environment the students consumed it in was relatively safe, but their behavior was inherently inappropriate and violated contract. The incident only came under administrative attention because a member of the delegation was ill the day after the drinking. Ironically, bad shrimp and not alcohol was the likely cause.

So far, only the SGA is known to have issued disciplinary action, while the administration proceeds with its own investigation and hearings. Three of the four suspects are SGA members and all four suspects receive financial compensation from the SGA’s Public Service Fellowship Program. The student government swiftly tried the four students and after deliberation, voted on Nov. 23 to defer their pay and relegate its three members to probation status. They unanimously voted a week later to remove them from the SGA definitively.

The SGA’s response was timely and commendable. A small group of its members undermined the integrity of the body and the collective held them to account. To their credit, two of the defendants publicly owned up to the misconduct and offered resignation.

The SGA removals were fair outcomes. This incident risked serious SRJC liability and the college’s public standing. It also stained the SGA’s overall reputation. These delegates represented the student body and SRJC brand on a statewide platform and students literally paid for it.

This student government is the first in SRJC’s almost century long existence to have financial compensation. They also steward a more than $400,000 annual budget on behalf of students. For these representatives to observe sobriety for three days would have been a minor effort, and for their constituents, a minimal expectation.

Student Board of Trustee representative Elijah Egger is the only suspect representative who students actually choose. The other three are SGA appointees. This made it more justifiable for the SGA to remove them independently, since their constituents didn’t put them in office. Egger has greater legitimacy because his peers elected him. The SGA cannot disappoint him regardless, since he belongs to board and not their body. If the administration or board does seek his removal, SRJC students deserve a voice, in the form of a recall election or some other democratic recourse.

Nothing about this scandal is uncommon or alarming. A few students exhibited irresponsible judgment and betrayed their colleagues and constituents confidence, but everyone is fine. Their actions did not cause irreversible harm or define them as people. Whatever final penalties, if any, college authorities decree; they should not follow the defendants beyond student government.