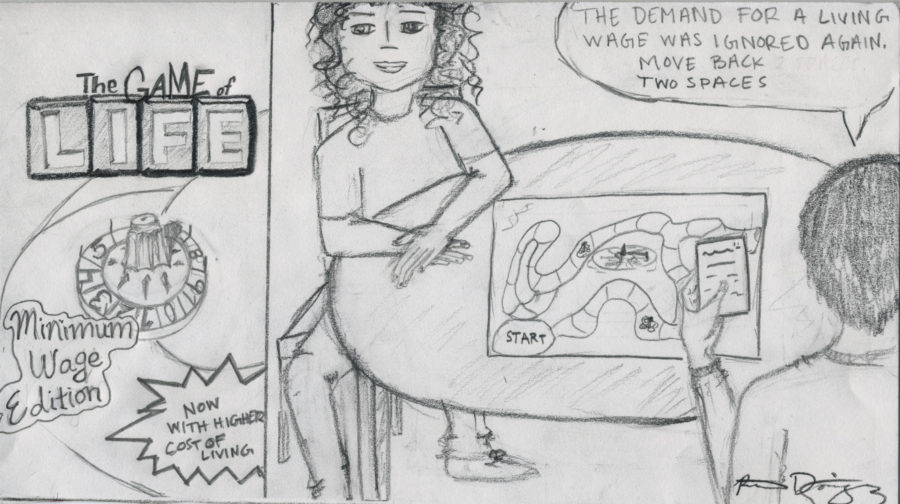 A paradox hangs over this country. The United States, the wealthiest nation on Earth, has more capital in its economy than any point in history, yet income inequality now parallels the Great Depression. The wealthy hoard America’s riches while the majority of its citizens share the scraps. Justice demands a living wage for all.

The American crusade for a higher minimum wage is at a boiling point. Labor demonstrations spanning the nation cry out for a $15 minimum wage. Fast food workers in the thousands protest in the streets of major cities and more than 45 million Americans live in abject poverty.

The sum of its treasuries is not the measure of nation’s wealth: that metric is the collective prosperity of its people. Wall Street and Silicon Valley’s profits may be the envy of the modern world, but until American workers of all economic strata live with dignity, America’s wealth is its shame.

This is far from a one-dimensional issue. Minimum wage is one variable in the volatile and complex sphere of macroeconomics. There are concrete differences between urban and rural costs of living, food prices in isolated Hawaii versus breadbasket states like Nebraska vary enormously and warrant consideration. Local economies are as diverse as the American people and regularly respond to changing influences beyond calculation.

However, given the prodigious wealth of the U.S, it is reasonable to raise wages in tandem with rising inflation and cost of living, or at least above survival levels. Every competent individual who works a 40-hour workweek should be able to feed and house his or her family regardless of market fluctuations. This is a broad and liberal standard perhaps, but one worthy of America’s promise and within America’s bounty.

The controversial “fight for 15” movement already has substantial victories. Cities like San Francisco and Seattle are phasing in a $15 minimum wage and last week, New York Governor Andrew Cuomo announced a statewide wage hike to $15 for all public employees by 2021.

Santa Rosa Junior College’s board of trustees preemptively raised the student employee wage to $10 an hour from $9 last week. Payroll enacts this raise Dec. 10 in advance of the California minimum wage boost to $10 an hour effective Jan 1.

This motion is primarily ceremonial in light of the state mandated raise, but the board’s independent ascent demonstrates an institutional leaning towards a living wage. A $10 minimum is still insufficient for most Californians, especially in the Bay Area where living costs are astronomical.

The Massachusetts Institute of Technology’s living wage calculator set a living wage for a self-supporting adult in Sonoma County at $11.94 an hour, which assumes the individual has no dependents and works full time year round. The living wage for an adult with dependents can be more than twice as high depending on the number of incomes in the household.

A higher minimum wage is an economic stimulant because it enhances the buying power of the average worker, thus promoting consumer spending and commercial growth. A more energetic economy naturally generates a stronger middle class, which is the epitome of American well-being. The money is already in the economy; workers just need access to it.

A fair minimum wage is not a one shot solution to wealth and income inequality. A progressive tax code, forcing corporations and the ultra rich to proportionately contribute to the society facilitating their wealth, extends opportunities and security to struggling Americans. Higher and vocational education finance reform enables more Americans to attain quality education at affordable rates and compete in a dynamic job market.

Minimum wage opponents criticize wage floors for killing jobs, yet according to the Center for Economic and Policy research, the 13 states that raised minimum wages in 2014 had faster job growth than states that did not.

Employers should invest in their employees. It may be cumbersome for some businesses to accommodate a universal living wage, but in 2015, the average business CEO makes 204 times more than the average worker. This degrades millions of Americans to poverty and endangers the overall economy by concentrating wealth in too few hands.

Americans should be able to afford to live in America; this principle has a resounding mandate the business community refuses to honor. Government, with due consideration for inflation and regional conditions, must intervene and make a living wage a reality for all Americans. The invisible hand of capitalism accomplished spectacular feats for this country with lax regulations, but sometimes the invisible hand wields a knife.