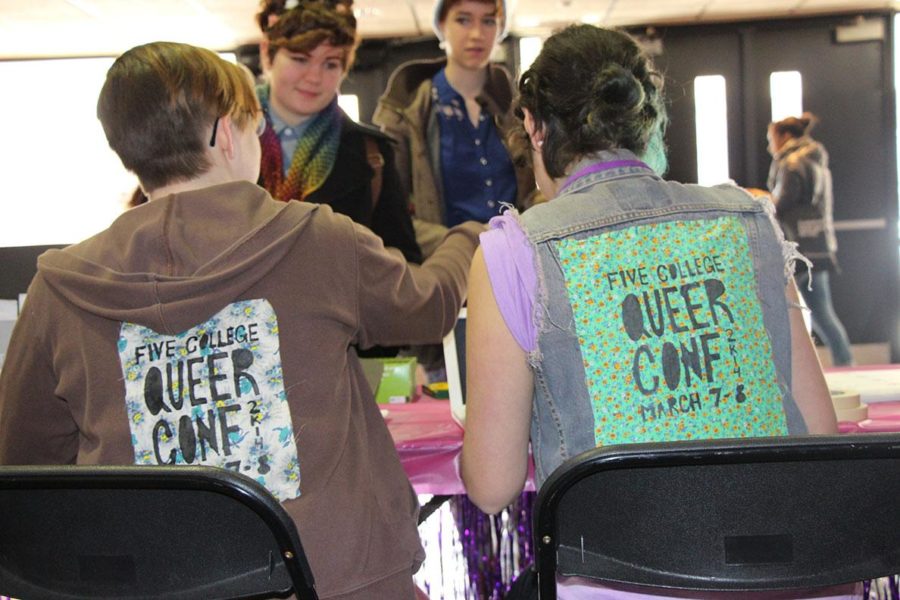 Attendees register for the 2014 Five-College Queer Conference. Hampshire College in Massachusetts hosts the student-led annual event, which offers a supportive place to explore gender and sexuality, as well as other intersecting issues. For more information about the conference, visit www.hampshire.edu/queerconf.

When we meet someone wearing a dress and heels, it is automatic to think of that person as a ‘she,’ whether or not they identify as a female.

This is a problem.

With the LGBTQ community getting more attention, issues like this should be hard to ignore, but they are not. There are many larger issues society needs to address in relation to the LGBTQ community, and something as minimal as using the correct pronoun may not seem like a big deal. And it’s not a big deal when compared to job discrimination of transgender people or refusing adoptions to gay couples.

But, it’s something people can address easily and, in a small way, change how they view those who are “different.”

With transgender people, there is often a refusal to use the pronoun that corresponds with the gender they identify as. This is a very simple matter; if someone identifies as female, use feminine pronouns. Don’t use male pronouns and don’t call them ‘it.’ It is rude and demeaning.

In other instances it is a matter of being uninformed.

Though many people see others as a ‘he’ or ‘she,’ it’s not that simple. Our ignorance can often be construed as disrespect, though that is not the intention.

We are taught from the earliest age, people are male or female, him or her and there are no other types of identity.

Society conditions us to place people in these two categories and some people become derogatory when they come in contact with those who can’t fit in these boxes.

Often, people who are gender fluid will accept the use of the pronoun that matches their biological sex because there isn’t a good alternative or others find gender-neutral pronouns confusing.

Sometimes ‘they’ is used as a pronoun for people who identify as gender fluid, but there are two gender-neutral pronouns that exist. One set of gender neutral pronouns, called the Spivak pronoun, has been proposed, where people are referred to as ‘E.’ The other option is the pronoun ‘ze.’

People who are gender fluid should not have to accept being addressed incorrectly because of others’ lack of understanding.

Though gender-neutral pronouns take some getting used to, we should make an effort to use them or respectfully ask what a person’s preferred pronoun is. A brief transitional period is something we can bear to show acceptance and respect to everyone’s self-identity.