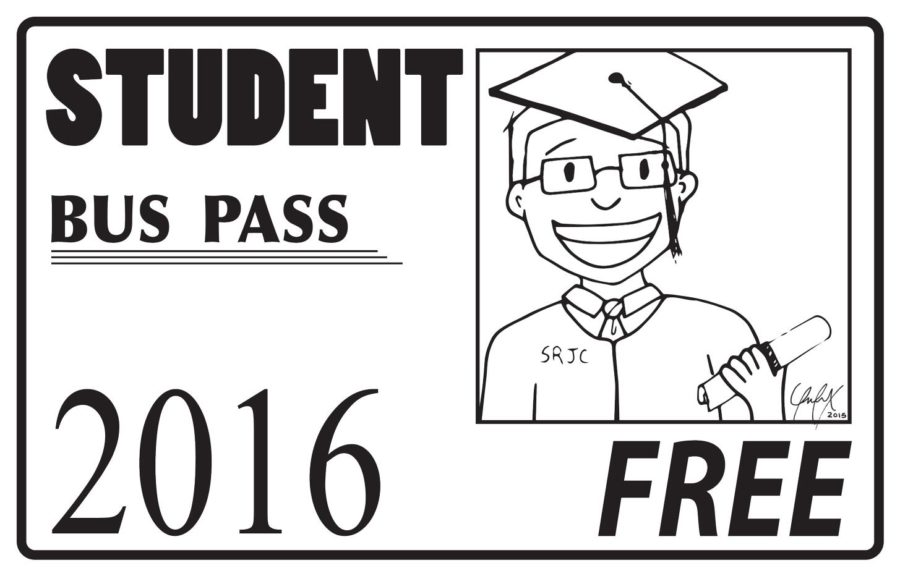 Any morning visit Monday through Thursday will expose a glaring transportation problem at this college. Thousands of students from the reaches of the North Bay and Wine Country flock to the Santa Rosa campus in a frenzied grab for parking, the deficit of which causes an irksome mess. Greater reliance on public transportation is the optimal ecological and financial remedy.

Sonoma County Transit incentivized communal transportation with its 2015 pilot program allowing college students to ride free on all of its routes until the end of this year.

SCT has not guaranteed the program’s renewal after December. Santa Rosa Junior College must secure its continuation and invest in other sustainable projects. The Student Government Assembly already pledged up to $30,000 from its reserves to a 2016 version of this service.

Cost of living in Sonoma County is steep. College students have the additional expenses of books and tuition, which are still draining, at the relatively affordable community colleges. Transportation, even with gas prices lower than in the nadir of the recession, is another heavy burden. The college community can ease this student expenditure by extending the SCT program and lobbying for transportation services like creating more and faster routes to SRJC.

The bus is a viable means to get to school. It is not luxurious or necessarily comfortable, but it is monetarily efficient and mitigates carbon emissions and traffic. Also, if bus use increases enough, it could alleviate the Bear Cub’s hellish parking nightmare.

Economically privileged students should also opt for the bus, periodically if not regularly. The cost of gas may be insignificant for these students, but the collective benefits of fewer cars on the road trumps individual convenience. Carpooling also helps.

The price of the pilot bus program is $258,000, according to SCT manager Brian Albee, who projected a 2016 continuation to cost around $295,000. The SGA’s allocation would about supply the difference. Further SRJC and Sonoma State University contributions would offset SCT’s expenses.

SCT’s program is a milestone, but it’s almost valueless for the thousands of students living outside Sonoma County, such as in Marin and Napa. SRJC should broker similar arrangements with transportation agencies like Golden Gate Transit, which services the 101 corridor but doesn’t currently have a student rate.

As a commuter college, SRJC needs to develop vast and coordinated access to its campuses to accommodate its sprawled student body. This should perhaps include more stops around the Santa Rosa campus on Elliot and Mendocino Avenues.

The college can implement several sustainability proposals in conjunction with the SCT program. One long-standing initiative is a bike/pedestrian bridge connecting the Coddingtown Mall to Elliot Avenue, which would facilitate safe bike travel to and from SRJC and enable students to park at the mall and walk to campus. Others are a shuttle linking the Petaluma and Santa Rosa campuses and an exclusively bike/pedestrian Elliot.

These projects are in line with SRJC’s Sustainability Collaborative ethos of ecological progress as its ambitious Green Print doctrine affirms. This proposal outlines 18 detailed goals for the college to attain by 2018, including efficient waste practices and green architectural methods.

Such reforms do more than modernize SRJC; they ensure the necessary preparations for the ravages of climate change and dwindling world resources. California’s historic drought in particular necessitates prudent and forward-thinking measures on the part of the college to buttress SRJC’s future.

Many would prefer expanded parking areas to a public transportation solution, and while more abundant parking is definitely desirable, it doesn’t address systemic problems like atmospheric pollution and freeway congestion. Bus and rail are the justifiable transit modes. SRJC should especially incorporate the Sonoma-Marin SMART train into future partnerships, when the rail is operational.

Sustainability is a community endeavor contingent on private and municipal efforts. SRJC should commit unwaveringly to the SCT bus service and to other related public transportation initiatives. There is no responsible alternative.