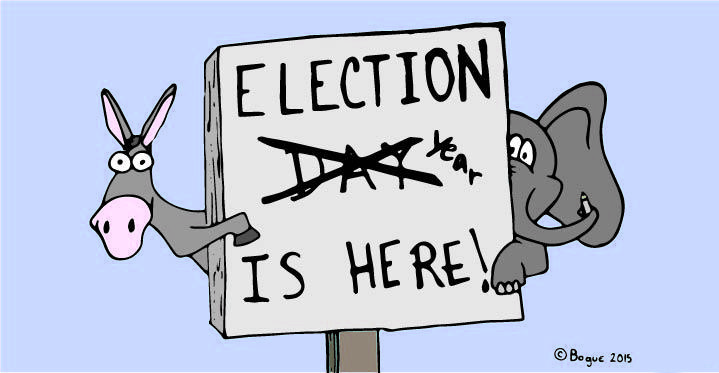 It comes down to one day every four years, the first Tuesday of November. Election Day. In one simple exercise, millions cast their preference for the presidency of the U.S. That’s all; one day, one vote and it’s over. The nation elects a president and waits another four years for the cycle to resume. This is a citizen’s minimum involvement.

While the people decide the general election in a day, presidential campaigns transpire over 18 months and maintain far more choices than the two major candidates who eventually occupy the fall ballot. Voters, especially college voters, have a responsibility to engage in the full election, not just the final hour.

Presidential primaries are hardly popular. Less than a third of the eligible voting population participated in 2008’s – the last election without an incumbent. And citizens 18-25 of age vote at lower rates than any other age group. The 2016 general is still over a year away but the time for college students to invoke their influence is now.

College students have nothing to gain by staking their voice exclusively on election day. Student loan interest rates are at record pinnacles, college affordability is now an oxymoron and the awaiting job market is insecure. It’s illogical to stay idle until there are only two realistic options for the presidency.

At present, there are approximately 20 nationally recognized presidential candidates with the minor likelihood for more. Naturally, many students will find many of these contenders unviable, but the field offers a diverse table of polices. Students need to identify which candidates best further their interests and support them now while the opportunity breathes.

Every day the election lurches towards a two-candidate race. Scott Walker, an early GOP frontrunner, dropped out just two months after he announced his candidacy because he failed to poll with above .5 percent of Republicans, evidence that voters are already impacting this election.

Primaries don’t begin until February and California’s is not until June, but the interim has no shortage of opportunity.

While candidates will spend most of their face time in Iowa and New Hampshire by necessity of the early nominating contests, they otherwise conduct their campaigns through social media. Students can use these forums, not only to publically comment on candidates positions and statements but also to proliferate a greater discussion. Retweet something Ted Cruz said about the Iran deal, post a link delineating Bernie Sanders’ infrastructure agenda. Declare a stance and argue for how a candidate or policy behooves or jeopardizes the interests of your peers.

Besides money, polls are the life and death of presidential candidates. Take online polls, encourage others to follow suit. If college students overwhelmingly register as an active voting bloc then candidates will have to accommodate their agenda.

The most direct means of influence is to volunteer on a campaign, either by official enlistment or proxy. Most college students can’t reasonably work full-time on a presidential race and California ground efforts are minimal, if not nonexistent, for months to come. Blogging and letter-to-the-editor writing on behalf of a candidate are powerful contributions. They serve the dual medium of advocating one’s convictions and familiarizing others with fresh perspectives on the campaign.

It can be challenging to penetrate the din of Donald Trump’s mudslinging or obscene political theater like the Kim Davis controversy to ascertain the substance of this election. The key is to read beyond headlines and delve into policy issues.

Broadcast media outlets tap into petty political squabbles to attain high ratings. It’s gaudy entertainment with the unique propensity to drown out actual debate. Students need to deliberately absorb the hard news and take into account not only candidate proposals, but also their financial backers, political allies and professional history. This sort of scrutiny is tedious but necessary to make responsible decisions.

It’s important for students not to abandon the election if their ideal candidate falls in the primary. A new president will still take office in 2017 regardless and enact policies pertinent to college students. There is an obligation to support a standing candidate, even if it is a determination of lesser evils.

College students should watch the debates and hold candidates accountable by frequenting non-partisan sites like factcheck.org and monitoring election commentary. They need to affirm their political beliefs and find compatible candidates to march their values to Washington. Ignorance and torpor are the halting mud of representative government. Students either educate themselves on the issues and brave the lengthy composite of the election or relinquish a great share of their civil influence.