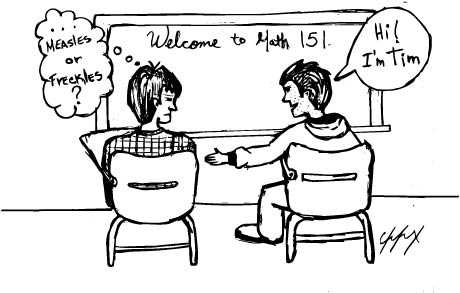 Proposed legislation could require all college students in California to receive the measles, mumps and rubella (MMR) vaccination in 2017.

Of the 103 measles cases to hit California during the 2014/15 outbreak, three are college students in Southern California and two cases are close to home in Marin County.

The Center for Disease Control and Prevention (CDC) recommends all college students get the vaccine. The measles virus, which lives in mucus and can survive on any surface for two hours, thrives in late winter and early spring.

College campuses have historically been areas of concern when a case of measles pops up. In 1985 two students and the daughter of a faculty member at Principia College died from respiratory complications due to measles. The student population at the Illinois Christian Science college was largely unvaccinated due to the shared religious belief that prayer cures disease. Out of 712 students, 113 contracted measles.

An Emroy University study published in the New England Journal of Medicine found that in the United States, MMR exemptions—medical, religious and philosophical—rose 13 percent annually from 2005-2011.

Although scientists debunked the moronic theory that the MMR vaccine leads to autism in the 1990s, public figures like Jenny McCarthy reignited the immunization scare in the early 2000s. California also has communities of wealthy, liberal and misinformed people who chose not to immunize for other reasons. This creates areas where the vaccination rate has tipped below “herd immunity”— a condition in which a large, immunized portion of the population protects the non-immunized and thus the disease is contained.

In the pre-vaccine era, 3 to 4 million people in the U.S. contracted the disease every year, and 400 to 500 died, according to the California Department of Public Health. The vaccination, introduced in 1963, reduced measles cases in the U.S. by more than 99 percent. Yet 27 people die every hour from measles worldwide. The death rate for measles is around one death in 1,000 cases—so every death means 1,000 others get sick. That’s a lot of sick people.

Measles is highly contagious and agonizing to endure. After a week of coughing, fever and pink eye, a rash spreads from your neck down to the rest of your body. Deaths are often caused by other complications, such as pneumonia.

The same year of the Principia College deaths, Boston University confirmed 82 cases of measles among students and took swift action to combat the outbreak. Boston University required all students prove immunity before they return from spring break, and provided 5,000 doses of the MMR vaccination to college-based clinics.

Hopefully it doesn’t take an outbreak to convince Santa Rosa Junior College students. According to the SRJC Spring 2013 Executive Summary Report, only 47.2 percent of SRJC students reported they have received the MMR vaccination, well below the ideal herd immunity threshold of 83 to 94 percent. SRJC Student Health Services offers the MMR vaccination for $58. For now, it’s still up to every individual to help the herd.