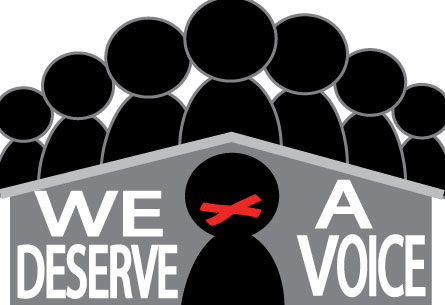 Representation in government: it’s the foundation of the United States of America, it’s the principal core of democracy – and for Santa Rosa Junior College students, it’s sorely lacking at the Board of Trustees level.

Of the eight members of the SRJC Board of Trustees, only one is a student.

Only this student trustee is denied the full privileges granted to the rest of the Board, which has historically consisted of affluent, retired, older white males. While no one can deny that these people have the best interests of SRJC at heart, it’s impossible to argue that this narrow band can be called “representative” of the ever-shifting demographics of the school’s student population.

The root of the issue lies within the laws regulating community colleges. California Education Code section 72023.5 simultaneously establishes the position of the student trustee and immediately limits its power by not granting the station any voting rights.

It’s difficult to produce change without a voice; it’s also difficult to challenge state law. Although it’s already denied the most effective tool for change, the Ed Code does make provisions for student trustees to be a fully-informed and advisory member at the Board’s discretion: first, by allowing them to give an advisory vote and to make and second motions; and second, permitting them to sit in on closed session meetings, excluding those involving personnel issues or collective bargaining agreements.

SRJC’s Board of Trustees has repeatedly refused to yield these two opportunities to its student trustee, and in doing so renders the position completely valueless.

Certain parties may wish to jump in to remind us that the SRJC Board does, in fact, give an advisory vote to its student trustee. However, these parties may neglect to mention that the Board only accepts this so-called “advisory” vote after the rest of the trustees have already voted. Advice after the fact is worthless; this isn’t a difficult concept to grasp, but it’s remained SRJC policy for decades. Similarly, the power to make and second motions, while not as powerful as a full vote, still lets students influence the Board overseeing their school.

While the Board of Trustees has been opposed to conferring these basic powers, it has been outright hostile about allowing the student trustee into any closed session. Twenty-year veteran trustee Don Zumwalt told the Oak Leaf, “There’s a lot of stuff you gotta keep to yourself.”

In interviews the Oak Leaf conducted with the Board of Trustees candidates, the consensus among the incumbents was that the student trustee position should remain in its inconsequential role because the student does not have the capability to handle these issues. This mindset is insulting to the person of the student trustee, who is just as concerned with taking care of SRJC as any other member – if not more so, because as a student, he or she is the only Board member directly affected by Board’s policies.

Regardless of which candidates take seats on the Board after Nov. 4, the Board of Trustees must rework its attitude and empower its student member with access to the appropriate closed sessions, the ability to make and second motions and an actual advisory vote. SRJC students deserve more than having their representative’s voice heard only as an afterthought.