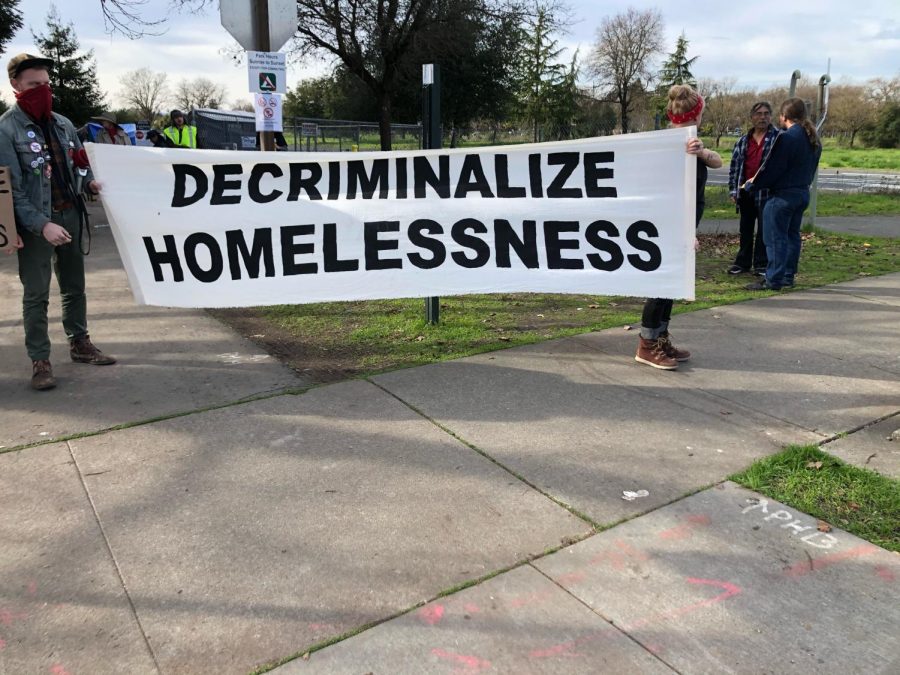 Protesters hold a sign toward police on the other side of Stony Point Road. No one is sure what the future holds for the residents of the Joe Rodota Trail, but the county is certain they will be gone from that specific location by Jan. 31.

Protesters from the North Bay Socialists of America coupled with Sonoma County bureaucracy and the realities on the trail brought plans to remove residents of the Joe Rodota Trail Jan. 29 to a screeching halt.

When armed officers of the Santa Rosa Police Department and Sonoma County Parks and Recreation began marching down the trail to scout and establish a preliminary presence, protesters on the other side of the trail at Stony Point Road chained themselves to the trail’s entrance gate, promising to impede anyone coming to “enforce the laws” on homeless individuals.

The protesters, from the North Bay Socialists of America and other affiliates, claimed the forced removal of homeless was both a violation of human rights and illegal.

One of the group’s leaders, Michael Titone, said the group intended to remain for as long as it could.

Citing an injunction in federal court, the protestors claimed the City of Santa of Santa Rosa and the County of Sonoma had no right to go through with their plans to remove the more than 200 homeless residents still residing on the trail.

When the protesters finally spotted police forces moving toward them on the other side of Stony Point Road, one protester shouted into a megaphone “40% of police beat their spouses”.

The police, wishing to avoid a confrontation, did not cross the street to engage the protesters.

Meanwhile, the supposed Jan. 29 deadline was further delayed by the slow processing of homeless people for relocation.

Rohish Lal, public information officer for the County of Sonoma, explained that the Jan. 29 deadline was just an attempt to begin the process of “relocation.”

“We’ve got 30 people [moved to the Los Guilicos Village shelter] so far,” he said.

According to Lal, Parks and Recreation in conjunction with SRPD, was going up and down the trail to remind residents that Jan. 29 is here, and the removal effort is serious.

Jan. 31 is now the line in the sand. Anyone not off the trail by that date will be forcibly removed.

Part of the problem is that many of those cleared for transfer to Los Guilicos either never go or, once they arrive at the village, do not stay.

Multiple homeless residents confirmed that the uncertain last minute rush to get approval for Los Guilicos, combined with the unsatisfactory situation there, made them decide to forgo their bus ticket.

One resident, Steve, went to Los Guilicos on one of the first two days, before deciding he couldn’t stay.

He came all the way back to the Joe Rodota Trail to reclaim his camp.

According to Steve, the “shacks are very small,” the facility provides three very minimal meals a day, and it is incredibly far from any other services, making it hard for residents to fulfill their needs.

Steve was resentful of what he thought were  exorbitant costs of Los Guilicos, it would have been cheaper to let the homeless construct their own shelters.

Asked why so many residents were staying when they knew for certain that police would be coming, Steve had a straightforward answer.

“To get arrested,” he said.