The Oak Leaf • May 5, 2022 • https://www.theoakleafnews.com/news/2022/05/05/pro-choice-rally-held-in-old-courthouse-square-in-response-to-leaked-supreme-court-draft-overturning-roe-v-wade/ 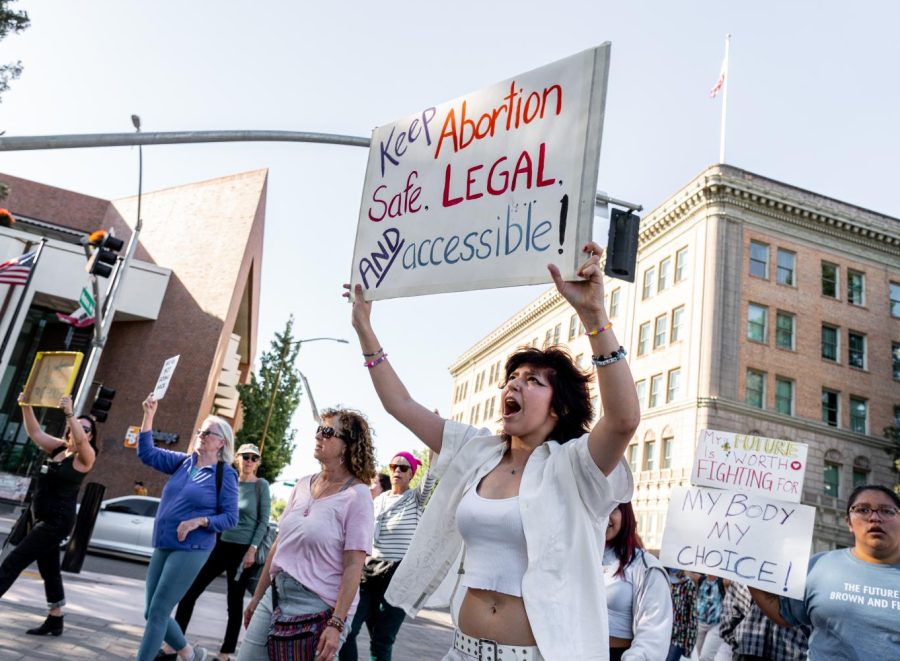 Natalia Diaz heads a march around Old Courthouse Square during a pro-choice rally on May 3, 2022 in Santa Rosa, Calif.

A modest crowd of more than 50 people gathered in Santa Rosa’s Courthouse Square Tuesday to voice opposition to a recently leaked Supreme Court draft opinion that could potentially overturn the landmark Roe v. Wade decision, which has guaranteed federal protection of abortion rights since 1973.

The crowd stood at the edge of the square waving recycled signs of pizza boxes and coat hangers to traffic on Third Street as countless motorists honked in support.

“Honk your horns for women’s rights,” screamed Thea Hansel at the corner of Santa Rosa Avenue while wearing a pink hat with ears.

The diverse crowd included men, women, children and non-binary individuals. Participants had their own unique reasons for showing out to support abortion rights.

Justice Samuel Alito’s draft of the opinion was leaked to the news organization Politico by an unknown source. The draft signifies that after nearly half a century  the supreme court is prepared to overturn Roe v. Wade, with Alito stating, “Roe was egregiously wrong from the start.”

Many attendees voiced concern over the world younger women may come of age in, if Roe v. Wade is overturned.

“I’m here fighting for young women so they have a choice. I had a choice, and I exercised that choice, and it changed the course of my life,” said Katie Moore as she proudly held her homemade cardboard sign.

“I’m here for my 17-year-old daughter at home,” said Cheryl Witteman. “This is simply our constitutional right to privacy. Abortion is [a] medical treatment.”

“I used to be pro-life until I had a baby and realized it was not a good thing to force people to do,” said Marie Millard.

Young women, who made up only a small fraction of the crowd, were some of the loudest voices.

“There’s not enough youngsters out here. Growing up in this generation it’s very important to us. It’s very important to me that our women feel safe,” said Natalia Diaz after leading a march around the square. “It’s not right for anybody to tell anybody what they can or can’t do with their own bodies.”

Marie Fisher, another young protestor, said she was fighting for her future. “The fact that women are getting their rights taken away is just insane to me. Women’s safety will be challenged,” she said.

Leslie Graves, an organizer for women’s marches in Sonoma County, strongly opposed the decision. “The draft of this decision is a travesty and will set us back to the dark ages,” she said. “We can’t let it happen.”