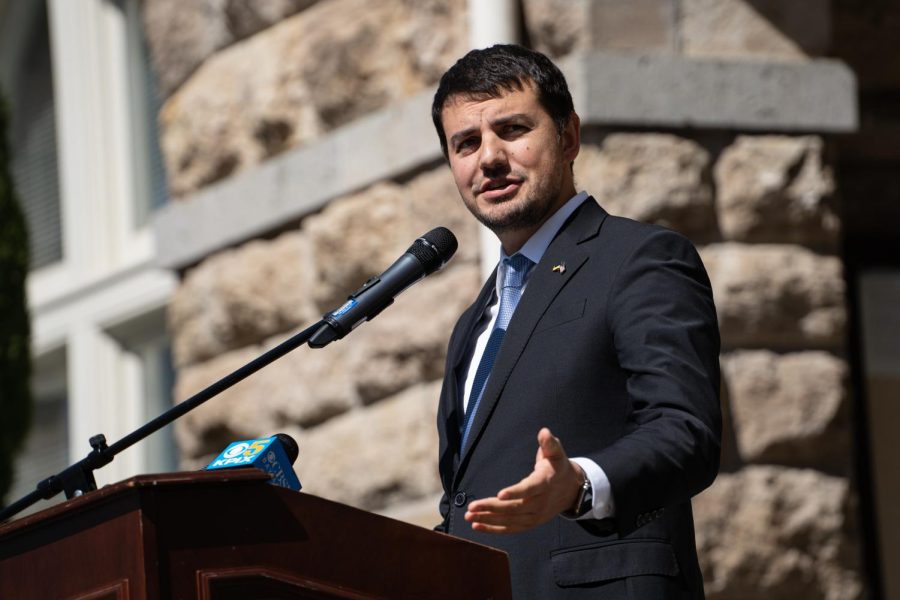 Hundreds of blue-and-yellow-clad supporters swarmed Sonoma City Hall March 17 to witness Consul General of Ukraine Dmytro Kushneruk speak about the plight of the Ukrainian people and receive a key to the city and a proclamation of support from Sonoma Mayor Jack Ding.

“We strongly condemn the unprovoked action taken by the leadership of the Russian Federation against the citizens of Ukraine,” Ding said in his rousing speech. “The city of Sonoma affirms our support for the people of Ukraine, its sovereignty and independence.”

After Ding spoke, Kushneruk stood at the podium to address the impressive crowd, some waving the Ukrainian flag, others holding up signs reading “The moral arc of history bends to Ukraine” and “F*ck Putin.” The Boys and Girls Club of Sonoma made blue and yellow hearts for attendees to wave.

Kushneruk thanked Ding for his proclamation, and he thanked the citizens of Sonoma for donating more than $13,000 to Kaniv, Sonoma’s Ukrainian sister city. “It’s very important to know for the people [of Ukraine] that they are not alone in this fight against Russia, that people all over the world support them, not just the armed forces [of Ukraine] but support for all the regular citizens who suffer from Russian war,” he said.

He also invoked historic attacks on American soil to explain his countrymen’s situation in a way Americans could understand.“You can remember Pearl Harbor, the morning of December 7, 1941, when your sky was black from the planes attacking you. Remember September 11, a terrible day in 2001, when people tried — bad people tried — to turn your cities into battlefields, when innocent people were attacked. No one expected that, and you couldn’t do anything about it,” he said.

Kushneruk also had a message for people who complain about the increase in gas prices. “Children’s lives are worth more than a 50 cent or $1 rise in gas prices,” he said as the large crowd cheered.