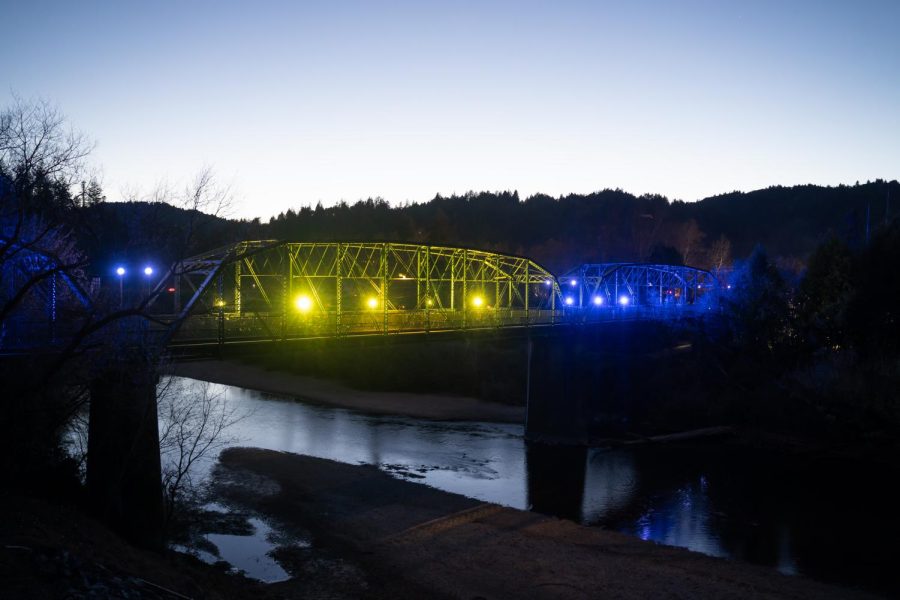 The County of Sonoma Department of Transportation and Public Works made it possible to light the Guerneville Pedestrian Bridge in the national colors of Ukraine in Guerneville, Calif. on March 11th, 2022.

A spirited crowd gathered Friday evening to show support for Ukraine in the face of Russia’s invasion and to watch Guerneville’s Pedestrian Bridge light up blue and yellow, the colors of Ukraine’s national flag.

This marks the third Sonoma County bridge to be lit in support of Ukraine, after the Healdsburg Memorial and Monte Rio bridges.

About 100 community members attended, some carrying signs such as “Putin Go Home” and “Make Pizza, Not War.” Ukrainian flags were draped over a fire engine parked near the bridge. Children hula hooped on the grass while parents chatted in small groups. Many attendees draped Ukrainian flags around their shoulders.

“Vladimir Putin has people afraid to speak up, and he’s feeding them lies. I don’t want that here, and I don’t want that there,” Lumer said. “Ukraine is standing up for the truth and the freedom of their country, and so I support them.”

Inna Talantova and Paul Miller, a couple who have lived in both the U.S. and Russia, attended the rally to show support for their friends Alona and Valentina in Ukraine.

“Alona’s two sisters and their three kids had to leave Ukraine and they managed to make it to Poland. The husband of Alona’s sister had to drop them off at the border and drive back to their hometown to fight the Russians,” Miller said. “It’s a tragedy, these families are divided. They may never see their father again.”

Talantova’s feelings for Russia are complicated.

“When this war started, I felt horrible shame to be Russian and to be in this position,” Talantova said. “My family is back in St. Petersburg, Russia, and they are going to be hurt too. It’s horrible for both countries.”