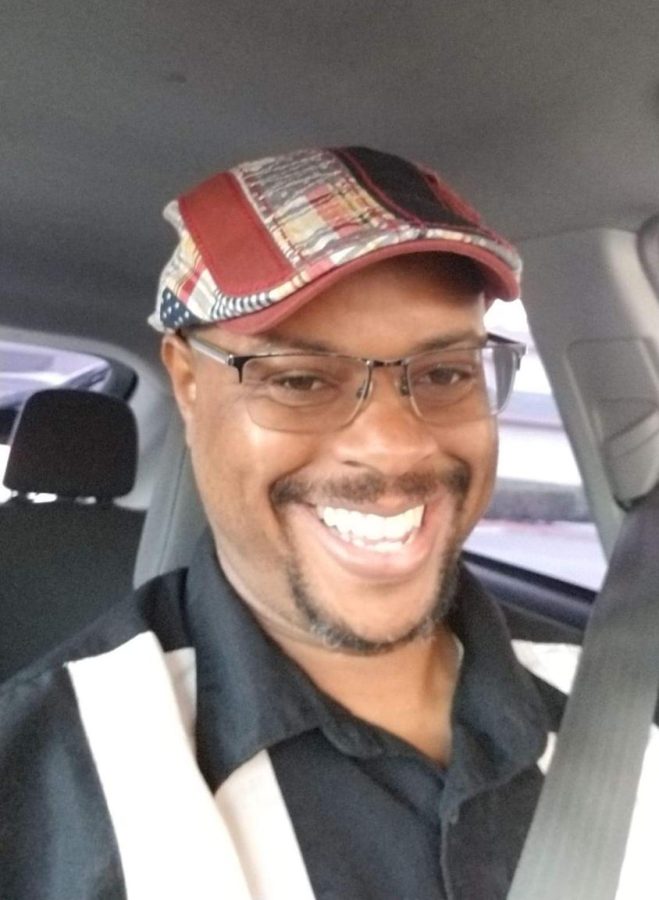 Dr. Erik Atkinson, 50, teaches students to “find their writerly voice and to be comfortable in writing and thinking that’s outside of their preferable.”

Atkinson received his master’s degree in composition/rhetoric from California State University, San Bernardino, where his thesis was “African-Americans with novels as a means of griot”; a groit is a traveling storyteller who maintains a tradition of oral history in West Africa. He earned  his doctorate in African-American Literature from University of California, Riverside, with research focused on “the rhetorical process that determines the ink and pigment of comics as Black.”

“I chose to study these aspects of my culture as a way to understand it better and to teach its beauty,” Atkinson said.

SRJC’s English department hired Atkinson two weeks before the Fall 2021 semester. He lives in Southern California and looks forward to moving to Sonoma County at some point in 2022.

Some of the books he assigns his students include  “Nat Turner” by Kyle Baker, “The Gigantic Beard that was Evil” by Stephen Collins, “World War Z” by Max Brooks, and shorter stories like “The Yellow Wallpaper,” “The Story of an Hour,” “Everyday Use” and “Recitatif.”

“My one big gripe is that I didn’t get to teach African-American literature face-to-face. It’s one of those disciplines, one of those genres that I feel teaching online doesn’t actually benefit it,” Atkinson said of the fall semester.

Atkinson was born in Victorville, California, the high desert, in an area he defined as “a sparsely populated town full of joshua trees, tumbleweeds, snakes, and lizards.”

”Growing up, we were allowed to be independent, mostly exploring the desert — finding Conestoga wagon tracks, quartz, bones, snakes and building forts. All this to say that I was allowed to be intellectually curious and an independent thinker because I had to entertain myself. Luckily academia thrives on those very qualities,” Atkinson said.

“Growing up, Victorville was a lot like Palm Springs in that many people of Hollywood used it as an escape. So it was nothing to see Roy Rogers downtown, Atkinson said.“He was a real cool dude, and if you saw him around town, he would stop and talk, but the moment you wanted to talk about Hollywood, the movies, the music industry or his career, he would say ‘Ahh, I gotta go.’”

Atkinson’s interests include being outdoors, hiking, riding bicycles, collecting “records and music that tends to be unknown to me or hard to find,” and hanging out with his cat, a tortoise calico that he said chose him about 10 years ago.

He also collects historical artifacts that attract his interest, including  a 1934 “white only” sign from a pool in Selma, Alabama that he purchased on eBay. “So this idea that there’s a capitalist price to it, but not a historical, political or cultural acknowledgement of this is interesting and a weird dichotomy,” Atkinson said.

Atkinson appreciates the academic freedom at SRJC to determine what he teaches in his courses and how his colleagues have welcomed him into the college community.

“He is kind, engaged and, on the bookshelf behind him in Zoom meetings, has historical artifacts, physical manifestations about things they are reading, to help students make relevant connections between what they see in life and what he [Atkinson] is teaching them,” said SRJC English Instructor and Department Chair, Dr. Sheryl Cavales-Doolan.

Atkinson finds his students, who are culturally diverse with a wide age range, inquisitive, and he likes to hear them share their life experiences in class.

“I try to challenge my students and ask them, ‘Why do you have that view? What is it doing for you? Why is it that it’s so important to keep a hold of it?’” Atkinson said. “I just want my students to have a sense of understanding and wisdom to grow from what we’ve been talking about in class, not just the sense of doing it for the grade because it’s part of the assignment, but how it’s affecting them.”