SGA asks SRJC student groups if the campus is student-ready 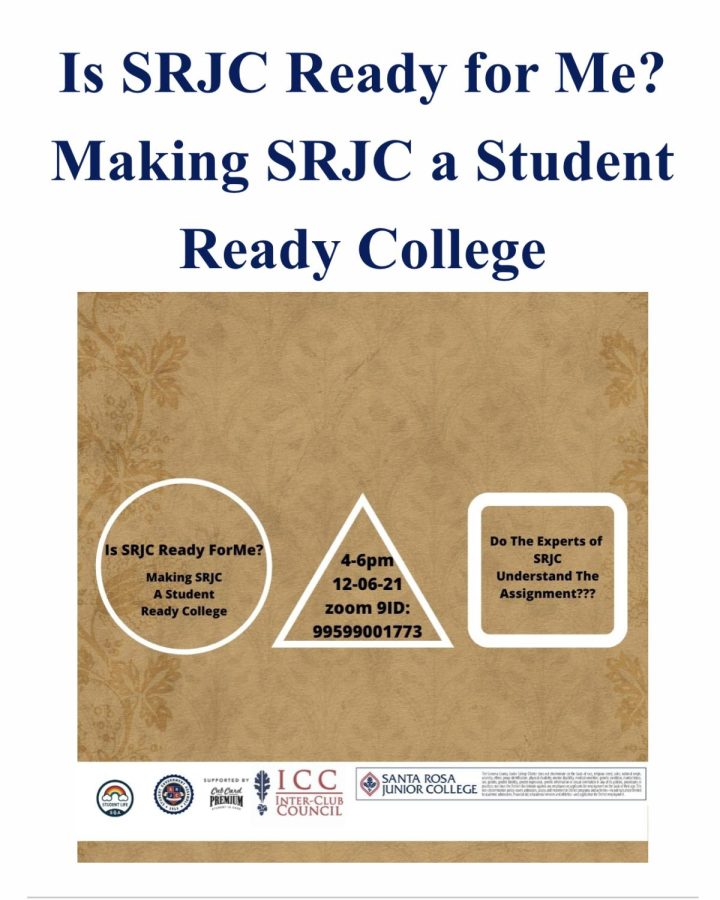 SGA asked representatives from 15 Santa Rosa Junior College student groups how supportive campus administration and culture was for them over Zoom Dec. 6.

Representatives from 15 Santa Rosa Junior College student groups weighed in on how supportive campus culture is for them at the Student Government Assembly’s “Is SRJC Ready For Me?” event Dec. 6 on Zoom.

Student Body President Delashay Carmona Benson and SGA Student Trustee Anetra McCartney created four questions for representatives from student groups, such as LGBTQ2S+, students with disabilities and the Second Chance Club for formerly incarcerated students about their experience at SRJC and whether SRJC has been supportive of that experience.

“It’s not ‘Are the students ready for college,’ but is the college ready for us?” Benson said.

Representatives shared a grievance about the lack of communications for students to learn about student clubs and organizations and where to find the appropriate resources for students of different socioeconomic backgrounds.

Benson said as a re-entry student, adults who return to school after some time away, she felt alone when she came to SRJC. She only learned about the resources SRJC offers after joining SGA.

“Student government really helped me a lot. It helped me understand my rights in this country and as a student. But not everybody is outgoing enough to join a club,” she said.

“A lot of students come to me and ask me where a building is or what’s going on,” she said.

Odalis Rebollo, assembly member of Hispanic and Latinx students, said many Latinx students are first generation college students who come to SRJC without much awareness of higher education. This can lead them to give up because they don’t know what they are doing or how to formulate an education plan.

“As a student and a queer person I have to figure out how to navigate a system that’s not designed for me, but cis, heteronormative spaces,” Cottrell said. “It feels like being expected to learn away your queerness.”

Athena Weathers, SGA vice president of diversity who spoke for disabled students, said disabled students can have mental or physical limitations. She said the Disability Resources Department helps disabled students with classwork such as test prep and class notes, but there’s still mobility issues with getting to class.

“There are some places where it’s hard to find ramps or elevators to get to the second floor and that can really hinder our academic workforce,” she said.

She also said the DRD building is on the third floor in the Bertolini Student Center, which isn’t the most accessible location for students with physical disabilities and can limit the help they receive.

As a way to improve communication on campus, Justene Cortes, assembly member of SRJC Indigenous Tribal Council, said SGA could pair up with outreach groups and go with them to high schools to let high schoolers know about SGA before they enter SRJC.

“If you are coming to SRJC these are the invitations you’re looking for. We can make that easier by giving them the information,” she said.

“I feel a lot of students are getting left out. I feel that bringing these groups down to talk to the students and letting them know ‘we’re here’ [is important],” she said.

Jimmy Brock, who represented the Second Chance Club and Students for Recovery, a support group for students recovering from addiction, said a lot of Second Chance students feel fear and anxiety when first coming to SRJC, because there is a lot of stigma with people who have been in prison or are in recovery.

“There’s a lot of misunderstanding with faculty and students, and uncertainty on how they will react,” he said. “A lot of Second Chance students feel they have to cover up their tattoos or not talk about their background, and that’s wrong because it shows they are afraid they’re going to be judged.”

Waad Dafalla, SGA vice president of student health, who spoke for student health STEM and pre-med students, said there needs to be more student involvement in professional assessments of instructors that students can see and for the JC to know if instructors are teaching effectively.

She is also working with student health to make walk-in services more accessible, such as for  booster shots and vaccines, so students don’t need to worry about making appointments for everything.

Cottrell also said there are a number of communities on campus who have been impacted by police violence and that SRJC needs to address student relationships with campus police.

Brock said police can be triggering to Second Chance students. He praised the behavioral consultation assessment response and education, or B-CARE, program, a team of 20 staff members who deal with crisis prevention on campus, but said it needs to be improved. Instead of the grievance process, there needs to be a phone number to call for an immediate response instead of the police.

Brock also said AODS, alcohol and other drug services, counselors are needed in student psychological services and addiction accommodation for students in recovery.

“Let’s say someone relapses and comes to class intoxicated; they’ve just violated student conduct. That’s unacceptable because addiction is a disease and they can’t help it if they relapse,” he said.

To counter communication problems, Brock said there should be mandatory comprehensive sensitivity training for everyone on campus. He thinks a lot of students, faculty and staff feel they are culturally competent so they have nothing more to learn on how to treat other people with respect.

“It’s about cultural humility, continuing to learn, because something that was acceptable 10 years ago may not be acceptable today,” he said.

Quinn Han, assembly member of SRJC APASS, said there needs to be intercultural sensitivity training as well. She said sometimes cultures use different terminology to say the same thing, which can lead to misunderstandings between students and instructors.

Ken Beck, who represented older adult students, said some older adults find the sudden switch to online learning and use of new technology difficult. He feels there needs to be more work to make hybrid classes, with a mixture of students online and in-person, more feasible for upcoming semesters.

“That makes you wonder what happened to the other half of these people. Are they having a hard time, getting sick and dying, because they don’t have exercise or stimulation for their minds?” he said.

Another grievance among the student groups was lack of transportation. Benson said a lot of students have jobs and need to take night classes, which is difficult when the buses end at 8:30 p.m.

“Better transit between the campuses would bring everybody together, especially for our disabled and older students,” she said.

Brock said having students on hiring committees would help student communication on campus.

“Students need more than just a voice, and should have a vote on who’s going to be in charge of our classrooms,” he said.

Cottrell said the Queer Resource Center needs to be expanded with full-time staffing as they’re limited with a few students and one overworked faculty advisor. They also said SRJC needs a Queer learning community and Queer therapists.

She also said SRJC needs a fall break, which would be a full week’s break during the week of Thanksgiving instead of two days.

“I’d rather go to school three days earlier and have the whole week off for fall break because I refuse to even call it Thanksgiving anymore,” she said. “For those who want to celebrate Thanksgiving, do it on your own fall break, but it should not be on the academic calendar as Thanksgiving.”