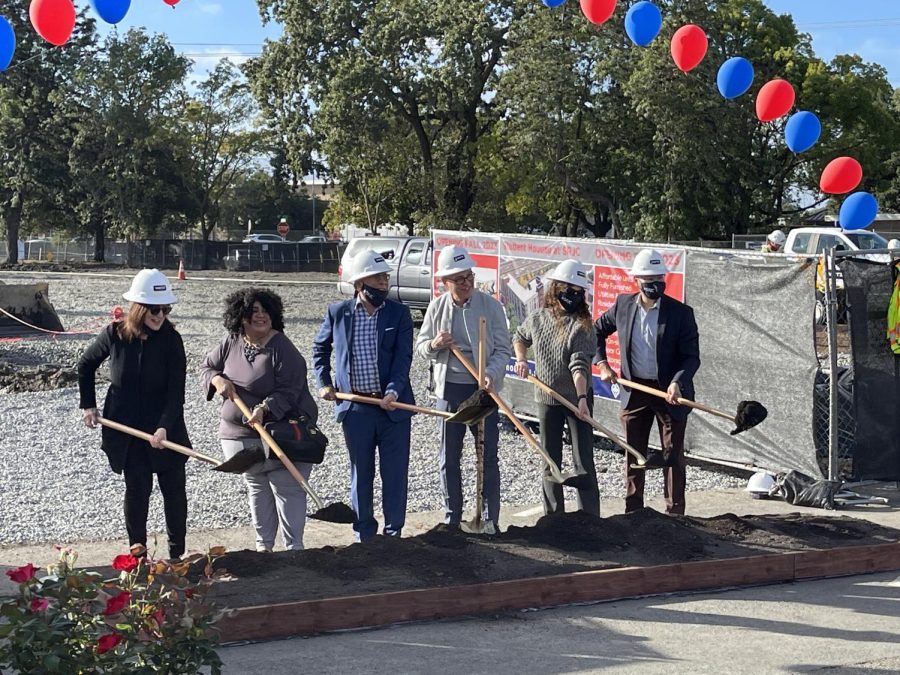 The first dormitory on SRJC’s campus, Kent Hall, was constructed in 1965 in what is now Analy Village and housed 72 students. It was replaced by faculty offices in 2003 and discussions about student housing ceased until three years ago.

The dormitory is scheduled to be open for the Fall 2023 semester, and applications will begin in September 2022.

The 95,218-square-foot building will have 258 units with four living options; traditional single, which is one bedroom and a community bathroom; traditional double, which is one bedroom shared by two residents and a community bathroom; single semi-suite, which is two single bedrooms and two bathrooms; and four bedroom, two-bath apartment, which is four single bedrooms and two bathrooms. The units come furnished and cost per semester ranges from $4589-$7990, including utilities.

Vice President of Student Services Pedro Avila said the cost is below market rate and student services is working to get additional funding that would lower rates significantly. Applications by vulnerable populations like low-income students, foster youth, homeless students, international students, students with disabilities and veteran students will be given priority.

According to Avila, the floors will likely be co-ed, and there will be a combination of gender-neutral and gendered bathrooms.

“It’s going to be diverse. It’s about unity and bringing people together,” he said.

Senior Dean of Students Robert Ethington said SRJC is working with project developers Servitas Management to manage the dorms, since student services doesn’t have enough staff to handle such a large number of students.

Servitas will also hire an on-site manager, professional staff and 10 student resident assistants who will oversee the students living in the dorms, he said.

“The team of RAs and the live-in manager will be integrated into our student affairs team, and we’ll work together to provide programming, activities and support to the students,” Ethington said. “We’ll also connect them to our student health services, academic counseling and tutors.”

SRJC President Dr. Frank Chong said SRJC is fixing up the Tauzer Gym which students in the dorms will have access to. Santa Rosa is also building a walkway over U.S. Highway 101 near the housing so students can cross to Coddingtown Mall and the nearby area.

Before students apply, Chong said SRJC will build models of the dorms to examine.

SRJC Student Government Assembly President Delashay Carmona Benson said student housing will lead to more campus engagement with the surrounding community. She hopes the project will lead to a dormitory on the Petaluma campus as well.

Student financial aid will go toward paying the residence hall cost if any is remaining after SRJC tuition and fees.

The project is a private and public partnership funded by Measure H. For more information, students can check out the SRJC campus housing project information webpage.