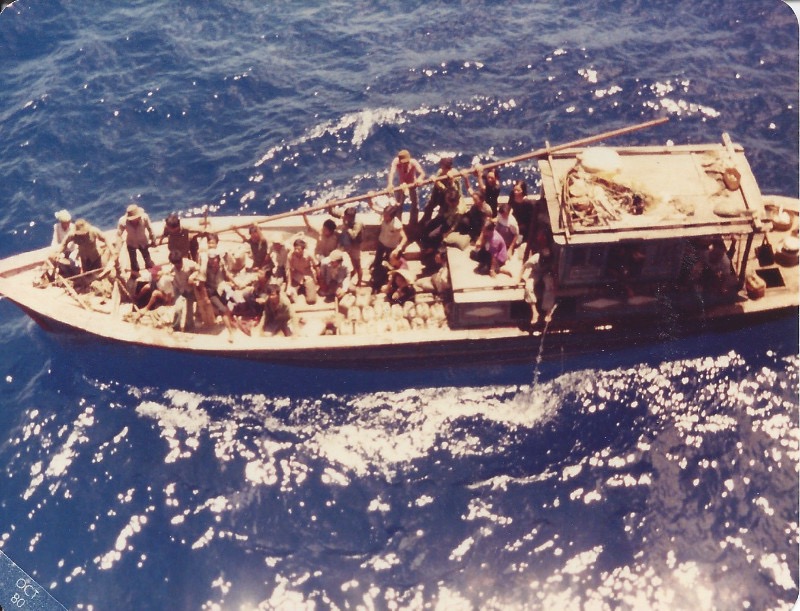 Lauren Vuong tells the story of a boat of Vietnamese refugees found by the LNG Virgo after ten days at sea in her documentary "Finding the Virgo."

Lauren Vuong promoted empathy towards refugees by sharing her journey of finding the captain who rescued her family after they escaped Vietnam in a screening of her film, “Finding the Virgo,” April 30, followed by a Q&A with Vuong and director Barre Fong.

Vuong’s story began with the Fall of Saigon on April 30, 1975, exactly 46 years prior to the screening. After the Fall of Saigon in 1980, her family fled Vietnam on a boat, leading to several treacherous days out at sea with little food and water.

They were saved by the LNG Virgo, a U.S cargo ship. Years after settling in California, Vuong went on a decade-long mission to find the captain who saved her and her family.

She started the journey to find the captain as a gift to her parents since they always wanted to thank the captain that saved them. As she learned more, she realized the story reached far past her own family’s experience.

Vuong eventually met “Finding the Virgo” director Barre Fong through mutual friends. As a fourth generation Chinese American, Fong creates stories in film not commonly talked about in history. So when Vuong shared the story of her family fleeing Vietnam, he knew he had to make this film with her to uncover the aftermath of the Vietnam War, an often untouched subject.

“Ken Burns covered the Vietnam War very very well [but] sort of left out the next 20 years or maybe 30 years of people left behind, of people trying to leave the country, of people suffering the effects after the war,” Fong said.

According to Fong, they tried to stay apolitical while making this film and just wanted to tell the truth. He wanted this film to ultimately be about empathy, which is his main motive in creating films about the Asian American experience. He wanted to show that the refugees that came to America are real people and although not everyone goes through the refugee experience, they can understand what they have been through in the films he creates.

To further dive into the story, Vuong wrote 300 handwritten letters in search of the captain and crew that saved her family. In 2015, she found an article which precisely documented the time of her family’s rescue. She discovered that 120 ships had taken the normal route until the 121st ship, The Virgo, who diverged to rescue them on their 10th day at sea.

The man who ordered their rescue was an immigrant himself. He gave each rescued family $10 before they left his ship so they could at least afford a meal. The captain did not care whether he got reimbursed for this; he wanted to make a contribution to the families either way.

Vuong’s family was kept in an Indonesian refugee camp for six months after being rescued. The camp had no electricity or plumbing and food was scarce. Vuong recalls the day they were able to leave. They stopped at a processing center in Singapore on the way to America and her family was allowed to go out into the city for one day. This is where she had cake with frosting on it for the first time, as well as her first apple.

When they reached America, her parents took any job they could no matter the pay, which included cleaning houses and pulling weeds. Vuong does not believe there is such a thing as a “typical immigrant” because nothing an immigrant does is typical.

“When a family of migrants picks strawberries for $60 a day under 103 degree weather. I would not say that is ordinary. I would say that is an extraordinary immigrant,” Voung said.

As an Asian American woman, Vuong considers herself part of both worlds. She has thought about whether having a hyphenated identity makes someone more or less American since people in America are from all around the world; she sees a hyphen as a bridge between booth identities. She never ignores the Vietnamese side of herself but since she grew up in America she feels like she has an “American swanger.”

“Anywhere in the world, the minute someone sees you walk they say, ‘Oh that’s an American girl.’ You can’t deny it,” Vuong said.

Fong has also thought about what it means to him to be Asian American since his family came to America in 1898. He believes that the Chinese values and traditions passed down to him have kept him in touch with his Chinese ancestry but above all else he calls himself a San Franciscan since that is where his parents and kids are from.

During her journey of searching for the captain, Voung received a handwritten note from former President Jimmy Carter saying that his administration let in 12,000 refugees a month; in the previous and current administration only about 15,000 are let in per year, according to Vuong. She believes this is because the U.S. was far more engaged in Vietnam but now they are not as involved in the Middle East, so they do not feel the same obligation.

“What Barre and I always say is if Virgo opened one more door for another refugee family or changed just one mind about what it means to be a refugee and an immigrant, our goal would have been surly surpassed,” Vuong said.

After applying two years ago to have their film distributed on public television, they finally signed a contract to get the film broadcast across 277 public TV stations, Fong said.