Sage wisdom from a lifetime of blues 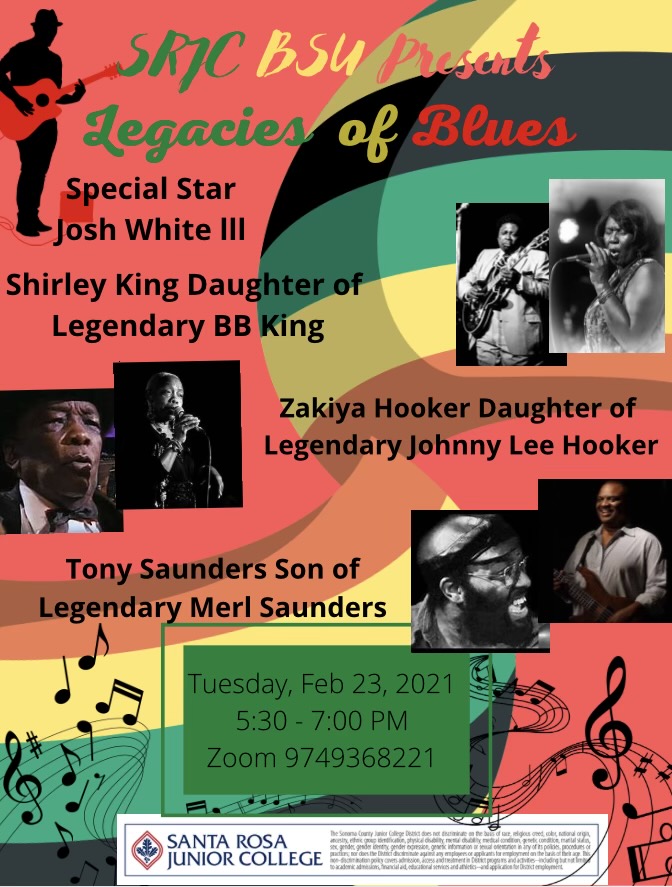 Children of legendary blues artists spoke with SRJC Students about their careers and struggle with prejudice at the "Legacy of the Blues" panel sponsored by the Black Students Union.

Children of legendary blues musicians gave advice to Santa Rosa Junior College students about becoming successful Black artists in a white-dominant society at the “Legacy of the Blues” panel Feb. 23.

“I was born into the blues,” Hooker said.

“If I told you about all the people I grew up around, you’d think I was bragging,” Saunders said, after name dropping Sly Stone, Dionne Warwick and the 5th Dimensions.

Delashay Carmona-Benson, BSU co-president, asked what it was like growing up as children of legacies during the Civil Rights Movement.

Hooker said her father shielded her from the outside when she was child. She wasn’t exposed to racism until she entered Southeastern High School in Detroit, Michigan; her yearbook was named “The Aryan.” Hooker recalls the sight of tanks in the streets during the Detroit Riots of 1968, after the assasination of Martin Luther King Jr.

However, it wasn’t until she moved to Alameda, California when she saw how racist people could be.

“It was the first place I was called the N-word. I was putting groceries in my car, and this big truck drove by and told me to get out of here,” Hooker said.

Saunders, who grew up in San Francisco near Haight and Ashbury Streets at the hippy migration height, had similar experiences. He started his music career as a teenager and became more exposed to racism as he toured the country with his white girlfriend.

Modern racial tensions are cyclical to Saunders. He remembers when Martin Luther King Jr. and John F. Kennedy were assassinated, lived in South Central L.A. during the Watts Riots and still has the Black Panther button that Huey Newton, the Black Panthers’ co-founder, gave him in 1968.

“It’s like my whole life I’ve been fighting just to be who I am. I live in a white neighborhood, and when I ride my bike I have a sign on my back that says I live here,” Saunders said.

Currently Saunders visits inmates in San Quentin and has an award for “Most Times Visited.”

“Them brothers need someone to talk to. I don’t care about the music,” he said.

White III said he didn’t have to suffer the injustices of prejudice as much as his father and grandfather did. His first exposure to racism came from his Italian girlfriend from high school. She told him if a Black man raped her sister then she would hate all Black people, but if a white man did it she would only hate the individual.

“It made me wonder how bad things really were,” White III said.

While he was a student at Wayne State University in Detroit, he was a part of the theatre department.

“I was a Black man in a white theatrical world. So to get onto the main stage I had to do Black theater,” he said.

Black theatre was dominated by stories of oppression, with the exception of Christmas and Easter time.

“You excel in Black theater and get promoted to the main stage because you paid your dues,” White III said.

Cooley didn’t grow up during the Civil Rights era, but he remembers when Cointelpro, an illegal FBI project, infiltrated rap music in the ‘90s. The FBI didn’t like the rise in conscious rap because it was eye opening so they made deals with record companies to promote gangster rap.

“The blues is beautiful. But hardcore rap music is degrading towards women. It makes our youngsters want to be gangsters instead of doctors or lawyers,” Cooley said.

Abrea Tillman, BSU club treasurer, asked about the inspiration of their favorite songs to play live.

Hooker mused on the blues storytelling nature “In the Pines” by Leadbelly, a song about a woman who has to sleep “in the pines where the sun never shines.”

“I love the old tradition blues. When I hear it, it goes through me,” Hooker said. “Somewhere in your life, you are going to experience what they are talking about. The blues isn’t sad, it’s about life.”

SRJC student Byron agreed in the chat, “The blues is affirming,” he said.

White III spoke about his grandfather’s song, “Free and Equal Blues.” The song tells the story of a man who goes to the doctor’s office and the doctor draws blood. The doctor tells him his blood is the same blood as all the other blood in the world.

BSU assembly member Joshua Poinsett asked for advice in being a Black man alive in this white world.

Cooley told Poinsett to be true to yourself and to know your personal history and ancestors.

He said he was bullied while growing up in East Oakland because he was light-skinned, and he gained confidence with the Black Panther Legacy Keepers.

“I felt stronger to be around like-minded people like me. To talk to people who go through what I went through,” Cooley said.

“If I program you to believe that you’re living in the white man’s world, the rest of you will follow what the white man wants you to do,” Dr. Timberlake said.

Anetra McCartney, vice-president of clubs at Petaluma, asked the artists to reflect about their journey as artists.

Saunders said he is proud of his contributions to music and hopes he helped pave the way for contemporary artists. He was proud to be a black musician and will always find a way to rise up and help other Black folks.

“We are the trendsetters. They copy everything we do,” he said.

To Saunders, Black people are the strongest members of society, especially Black women because they hold everyone else up.

Regina Mahiri, SRJC advisor for the BSU, asked the speakers if they were flattered when younger artists sample their fathers’ or their own music, and then to give some advice for students to achieve their goals.

Saunders said he is flattered when artists sample his father’s or his music.

“I learn from younger people as much as they learn from me, and I think if we both have an awareness of each other’s music, that’s great,” he said.

Hooker told students to follow their dream, and, despite what anyone tells you, do what you want to do. She also reminded students to learn the business part of the music industry, like publishing and royalties.

SRJC President Dr. Frank Chong attended the panel and extended his support to Delashay and the BSU.

“The JC needs to do better for African Americans in Sonoma County,” he said.

Delashay recognized how SRJC has stepped up to work with the BSU to help Black  students, such as scholarships and the Black Student Success Center in the works.

Carmona-Benson ended the panel with how students can support the speakers.

Hooker asked students to visit her web page, and to check out her music videos on YouTube.

Saunders also has a website you can visit. Join the mailing list for a free sample of the latest single from his last album, “Sexy Somethin.” He also has a radio show, which airs Tuesdays at 4 p.m. and Saturdays at 5 p.m. He plays live music on his Facebook page, every Wednesday at 5 p.m.

White III said he produces for his father, and has planned a series of virtual concerts to start in March 2021. He also has a Facebook page with an included link to his company Avalon Entertainment Inc.

Cooley said to check out their Facebook page, or their Instagram. He said they are currently working to feed people, stop sex trafficking and spread true Black  education in school districts.