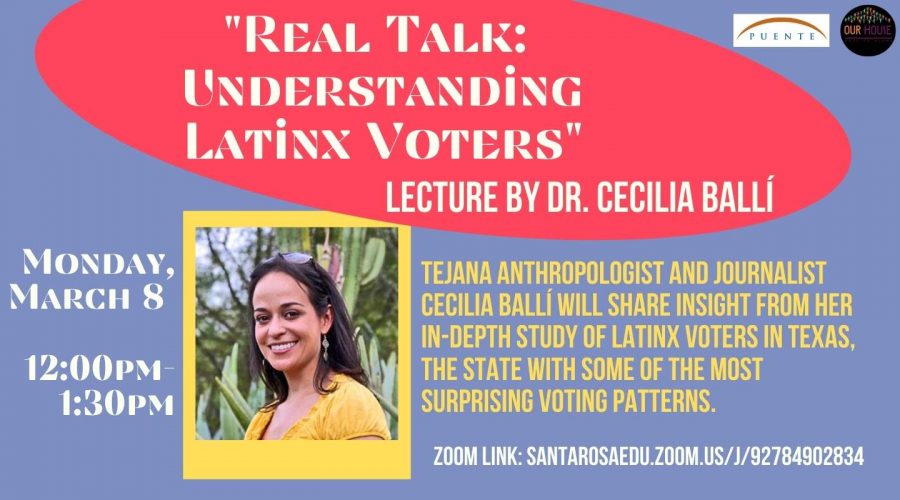 Dr. Cecilia Balli explored trends in Latinx voting populations through the lens of social, political and cultural values in her lecture March 3 over Zoom.

After immersing herself in the Latinx populations of Texas for over a year, PhD anthropologist, journalist and professor Dr. Cecilia Balli revealed how Latinx voter patterns are tied to deeper social and cultural tendencies on March 3 via Zoom.

Popular opinion assumes the reason Texas did not turn Democrat this year was because Latinx voters did not vote or voted Republican. Balli took a closer look to understand how Latinx voters relate to politics and government.

“Voting is a social and cultural behavior, as well as a rational choice that people make,” she said.

Balli and her colleagues interviewed 104 Latinx Texans for their survey. Most of the participants were naturalized U.S. citizens from Mexico or South America, and each interview was over an hour long.

Expecting deep partisanship among interviewees, Balli and her team found most Latinx citizens in Texas did not affiliate with a party or chose a side based on personal candidate preferences.

Latinx voters wanted a candidate who could understand and validate their own life experiences. Often cynical about voting, many feel candidates only appeal to them at election time, and that their vote, not voice, matters.

A smaller group of young voters are identifying as independent because they feel the two-party system does not accurately reflect all people living in the U.S.

Balli found a prominent relationship between frequency of voting and average household income. Individuals who make less money are less likely to vote, while those who generate greater income vote more frequently.

Empowerment and belonging were also strong themes in voter patterns. People who felt their decisions made a difference, and were comfortable with their social standing were more likely to vote. The majority of people Balli interviewed did not feel empowered or secure, whether it was in their political faith or personal lives.

Even though the majority of southern Texas Latinxs voted Democratic last election, there was an apparent shift, due in part to the abundance of clear messaging from the Republican party. Some Latinx people also identified closely with pro-life and pro-arms ideals, promises of border security, more jobs and economic gains.

New and traditional Republican interviewees expressed frustration with the narrow Democratic-controlled local politics and did not appreciate Democratic expectations to vote a certain way based on ethnicity.

Latinx Trump supporters, when asked about racism in the U.S., knew about the Black Lives Matter movement, but did not connect it with their own lives.

Balli feels the U.S. has failed to articulate systemic racism against people of all colors. Almost every person Balli interviewed, regardless of party, said they had experienced some kind of discrimination. However, they were not describing it as racism.

Balli said it will be up to the media to do a better job of connecting racism with discrimination experienced by Latinx citizens. It will also be the media’s responsibility to encourage greater interaction between political candidates and Latinx voters.

SRJC will be continuing its lecture series for Women’s History Month; click here for more events. Students who attend more than one presentation can enter to win a pair of Apple Airpods.