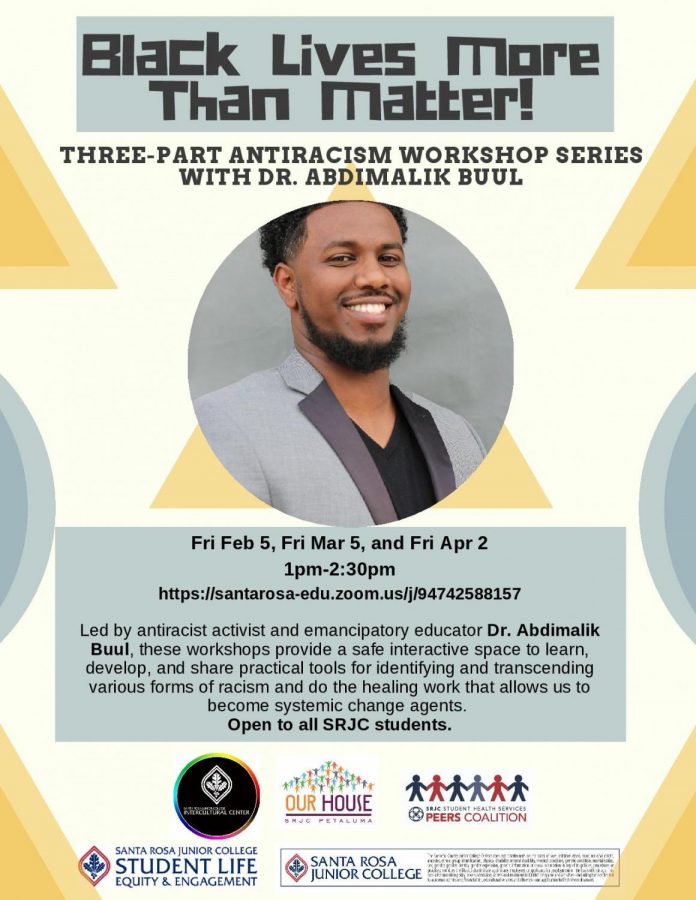 Dr. Abdimalik Buul asks students to deconstruct why the SRJC vision statement is insufficient in representing a diverse student population.

Dr. Abdimalik Buul, an anti-racist activist, spoke with Santa Rosa Junior College students about the lack of a model of equity for students of diverse socioeconomic backgrounds in SRJC’s vision statement March 5.

In this second of a three-part “Black Lives More Than Matter” workshop, Dr. Buul reminded students of the relationship between the four levels of racism: personal, interpersonal, institutional and structural. Institutions, like SRJC, were created in a racist society, but are also made up of individuals.

“Then you start to understand your role as an individual within the system, then ultimately move to acting within that role. Are you complicit or a change agent,” Dr. Buul said.

He said it’s important to understand the root causes of racism so we can develop a counteractive process to eradicate it. Many racist practices and structures continue due to implicit bias, such as the assumption on how SRJC’s vision statement represents a modern student population when it hasn’t been updated in eight years.

According to Dr. Buul, SRJC’s vision statement is a declaration of its values, and if students of color feel excluded when they read it then it leads to internalized oppression.

Students were sent to break-out rooms to analyze SRJC’s mission statement with the “5 whys” method. You identify a problem with a broad “why” question and break it down with more specific “why” questions until the root is found.

“SRJC aspires to be an inclusive, diverse and sustainable learning community that engages the whole person.”

Then asked students, “Why is the SRJC vision statement not enough?”

The lack of the word “student” was immediately apparent.

“There’s no college without students. You are the reason why this institution is constructed. You are the center,” Dr. Buul said. “To not even center you in the vision statement is a true, big omission.”

The students felt the vision statement was vague, particularly the word “aspires.” To them,  “aspires” means a work in progress without a specific date of achievement. It also keeps SRJC from being held accountable if the goal of a diverse and sustainable learning community is never reached.

Another group mentioned the lack of specificity in the vision statement also means different administrations or faculty can interpret it as they like.

Dr. Buul asked the students what words or goals should be added to the vision statement.

Students suggested continuous oversight to make sure the vision statement is being followed and revised if needed.

They also felt the statement should include measures about crisis prevention instead of a reaction to it after the fact.

Dr. Buul called this an asset approach as opposed to a deficit. “It’s looking at the potential as opposed to the limitations of our students. We also want to be healers in our space of education,” he said.

The final goal students suggested for the statement was marketing within the college community, such as more financial investment for student-run clubs and advisors. The amount of SRJC clubs has dropped lately because advisors do not get funding.

Dr. Buul said funding for club advisors makes a big difference in how well those clubs can operate. When advisors to clubs are paid a stipend, they are able to put time into travel with students for overnight trips and look into community resources.

Before leaving, Dr. Buul congratulated the students for their commitment to change.

“You’re working not just for you at this moment, but for those who come behind you. Wake up today and prepare for a better tomorrow than we had yesterday,” he said.

The final installment of Dr. Buul’s “Black Lives More Than Matter ” workshop series will be from 1-2:30 p.m. on April 2.