Art as activism and cultural inclusivity: A lecture with Mildred Howard 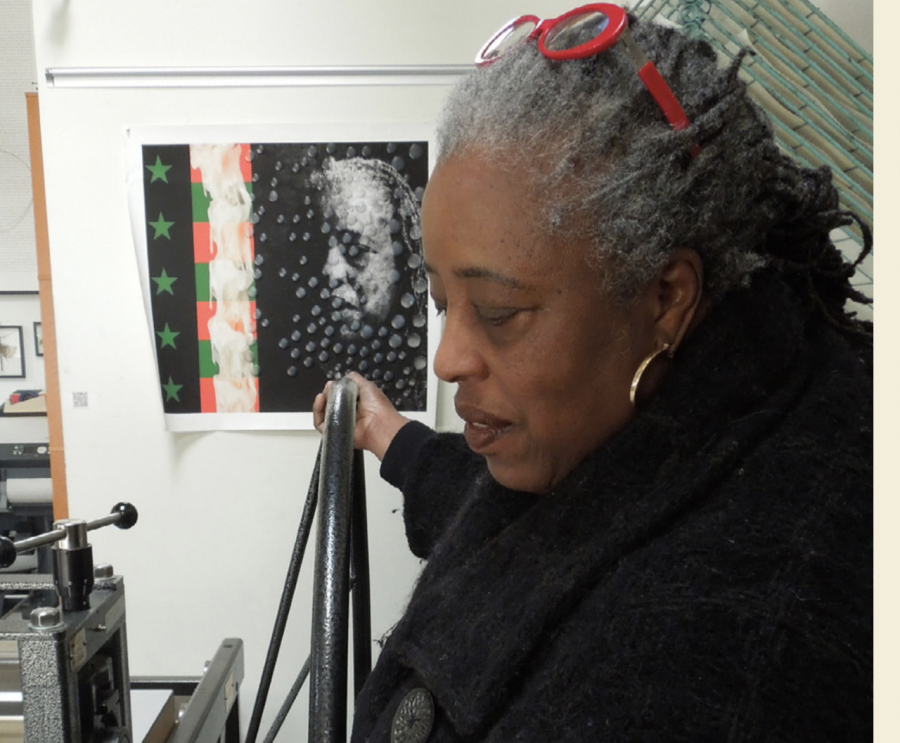 Embracing the diversity of the world and advocating for political, environmental and social change, the multi-talented cultural ambassador Howard is determined to expose truth through creativity.

As an internationally known artist, Howard interprets how she sees the world in unique ways. According to co-host Donna Larsen, Howard’s art has developed its own language to “speak about racism, injustice, memory and compassion.”

Historical emphasis, especially on inequality and violence, is a powerful theme in some of Howard’s work.

During the Iraq War, Howard searched her mind and studio for inspiration to make a piece in response to the horror that was occurring.

“It is too easy for those who are in control to go to war,” she said.

Casting her hands and arms in plaster and using an old globe from her worktable, Howard positioned her hands clutching the world. To portray the atrocity of bloodshed across so many cultures, she had Vermillion “blood” sluice from the world onto her hands and down her arms.

Presenting examples of racially offensive advertisements from the 19th and 20th centuries, Howard included images of African American twins featured on the packaging of Gold Dust Washing Powder, which suggested the powder was strong enough to wash their skin color away.

Howard juxtaposed the mockery of the advertisements by xeroxing images of herself and other famous people of diverse cultural backgrounds and placing them among existing images.

Recent national events stirred Howard’s political activism. She observed that if the capital insurgents had been dark skinned, the casualty rate would be much higher. Describing racism as a crime, she advised students to look deeply at how the U.S. talks about history, the environment, and understand that change has to happen.

Howard also placed emphasis on changing society, including women’s rights. Some time ago, SRJC displayed one of Howard’s pieces that incorporated cookware arranged in graduation from shiny to tarnished with hundreds of knives sticking out of the wall.

Howard tied this piece to a story of a woman being molested in her home; the woman threw a knife and it stuck in the wall. She played dead until the attacker was scared off. The same companies responsible for such metal kitchen items also made shackles used on enslaved Africans brought to the U.S.

Through art, Howard is intent on making the invisible visible. After being commissioned to design a bridge overpassing Fillmore Street in San Francisco in 2003, she spent a year interacting with people who would use it the most. The variety of cultures, from Japanese to African American to Jewish and Russian, enlightened Howard to two of the most universal things: food and music.

Howard considers blue to be representative of the people and titled the bridge “Three Shades of Blue.” Walling the structure in transparent blue glass, words from an inscribed poem by Quincy Troupe can be read from the street side or within the bridge.

As a globetrotter, Howard considers herself a citizen of the world. She has delved into many cultures to gain inspiration for her work. She celebrates the exchanging of ideas between countries, which both connect and draw cultures apart.

At a bookstore in Venice, Howard discovered Giacomo Casanova’s art and created a series built of 25 individual prints and tapestries focused on love, sexuality and passion, in collaboration with Magnolia Edition, a fine printing organization. Howard mixed different cultural and racial groups by darkening the skin color of some characters and placing a map over the face of another figure to symbolize the constant movement of people around the globe.

Intrigued by the concept of home, Howard has explored the subject for many years through critical thinking and artwork. She created a series of three large structures titled Houses of Memory; each “house” is built using differently colored glass bottles and metal or wooden framing. Her largest project, Clear Story, is composed of 92,000 clear glass bottles arranged in the shape of an M.

One of Howard’s current two major projects includes a massive bronze-cast question mark placed outside a library, opposite of a poem by Quincy Troupe.

“The library is one of the most democratic institutions in this country, free and open to the public,” Howard said.

In the second piece, Howard will scale African currency up to massive proportions, which will be arranged in front of a new community center in Bayview, San Francisco.

Howard’s overreaching messages of gender, racial and social equality combine with individual creativity to emphasize a determination to make the world a more knowledgeable and flexible place. Feeling a deep need to address injustice and inequality, Howard believes that shedding light on minorities through her work may cause someone to look at what she sees and change their worldview.

SRJC will be continuing its series of artist lectures for Women’s History Month, all focusing on female artists of diverse heritage. Click here for more information.