Black lives more than matter: Being an agent of change against structural racism 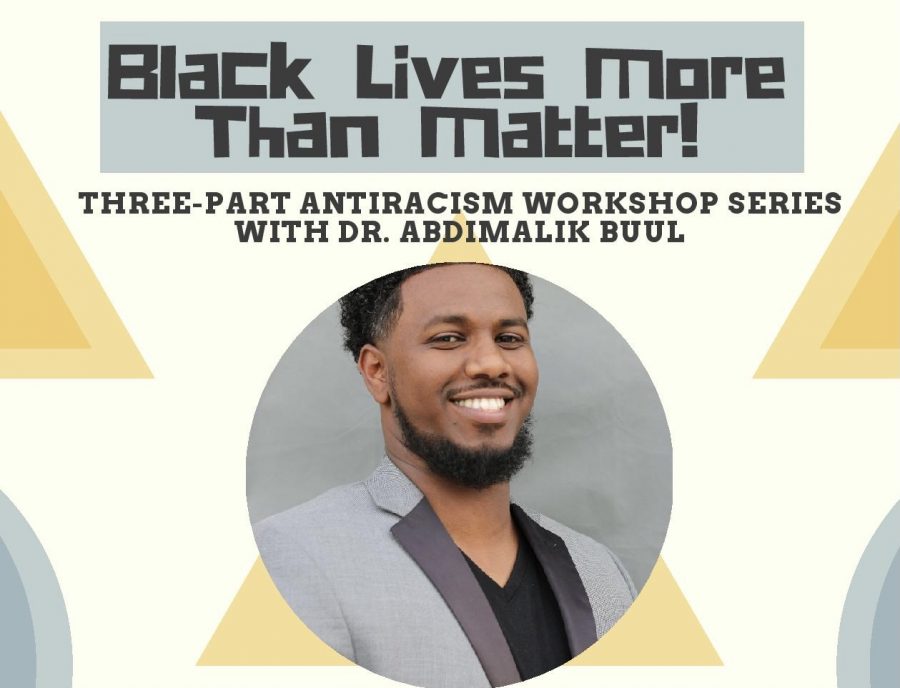 Dr. Abdimalik Buul spoke Feb. 5 over Zoom about the types of racism, how to be an agent of change and how racism affects us all.

Dr. Buul is a scholar practitioner who uses social justice and activism as his guiding pedagogy for change. He has led statewide efforts in race conscious practices and anti-racism training for most of his career as an educator. This workshop, the first of three to be held at SRJC, focused on identifying various forms of racism, how they’ve shaped American culture and “agents of change.”

To be an agent of change, Dr. Buul says you need to understand what your role is. He doesn’t consider himself just an “ally” or “co-conspirator” against racism.

“I want to be an abolitionist. I want to abolish racism. And that requires us to be anti-racist,” he said.

Dr. Buul described three zones of personal awareness to becoming an anti-racist. The first is the fear zone: denying racism exists and avoiding hard questions to stay comfortable. When someone transcends the fear zone they enter the learning zone: seeking out questions that make them uncomfortable and listening to others who look and think differently from them. The final zone for an anti-racist is the growth zone: speaking out when they see racism in action and educating peers about how racism harms their profession.

Dr. Buul said racism is the hardest social injustice for many white people to talk about, because they are stuck in the fear zone and scared to admit they have white privilege.

Delshay Carmona Benson, SRJC student body president and attendee, said, “they fear we might take [them] all over, but in fact we’re more peaceful than we’re given credit [for].”

Another part of the anti-racist lens is looking at racism as a structural piece of society, which means that all people are affected by racism. Dr. Buul said even the terrorists who stormed the capital building on Jan. 6 were victims of racism.

“Their ignorance, misunderstanding and inability to manage their emotions caused them to do such an action,” he said.

Dr. Buul compared the Capitol Building invasion to another treasonous act, the Civil War, and said they will continue to happen because we never had an honest reckoning with our history. Instead of calling the Confederates traitors, we’ve called them patriots, made monuments and named schools after them.

The workshop also focused on identifying how racism progresses from the individual to societal. Dr. Buul identified four levels of racism; the first, personal racism, comes from someone’s own private beliefs and prejudices, which leads to them avoiding others that look or think differently; the second, interpersonal racism, is the expression of racism between individuals, like jokes and racial slurs; the third, institutional racism, is discriminatory treatment, policies and practices within institutions; and the fourth, structural racism, is the culmination of the first three and leads to cultural norms that perpetuate racial group inequality.

“So if I look at you and dehumanize you by calling you an illegal alien then of course I can put you and kids in cages and not feel a certain way,” he said.

He also pointed out how covert racism promotes anti-Blackness norms, such as using the word black to mean bad, like blackmail, black sheep, and black market.

Dr. Buul doesn’t believe racism exists without power. In his slides, he defined racism as “any prejudice against someone because of their race, when those views are reinforced by systems of power.”

He considers any analysis of racism in America absent of white supremacy to be incomplete. Beyond policy, white supremacist narratives have historically been supported by education and entertainment.

Dr. Buul then gave examples of Black inventors who have touched our lives yet received little notoriety, such as Lewis Latimer, who perfected the lightbulb for Thomas Edison, laid the foundation of the telephone for Alexander Graham Bell and invented the forerunner for the air conditioning unit; Otis Boykin, the inventor of the IBM computer and the pacemaker; and Marie Ban Brittan Brown, a nurse who developed the first closed-circuit television security system.

Abrea Tillman, a student attendee, said that she was conditioned to feel she wasn’t good at science or math because she was Black, and didn’t realize it until she had a Black instructor for her computer class.

“It made me want to be a better student because I understand how important it is to stay and support Black faculty. Being a student is not about being perfect, it’s about making yourself better,” she said.

White supremacist narratives are also supported by the historic use of whitewashing in movies. Dr. Buul said that Sudan has about 100 more pyramids than Egypt, but more movies about Egypt come out of Hollywood because Sudanese people have skin too dark for white actors to play them.

He also criticized Hollywood for using fake countries to represent a utopian Black culture, such as Wakanda from “Black Panther.”

He finished the workshop by asking students about tapping into their power to make change.

Attendee Walter Isaac said, “Don’t be afraid to find Black students on campus and ask them what they need for help. If you don’t go to the source you’ll never learn.”

Benson said that students of color need to infiltrate.

“Get on those boards and committees. Be your own leader. That’s the only way there’s going to be changes,” she said.

Dr. Buul said that racism strips away your humanity over time, and to become human again it takes active awareness. We all have ears, but listening is different than hearing, because it requires an open mind. We all have eyes and can see, but only some of us have the vision of how things ought to be.

He will continue the next two parts of his “Black Lives More Than Matter” workshop on March 5 and April 2: both at 1–2:30 p.m.