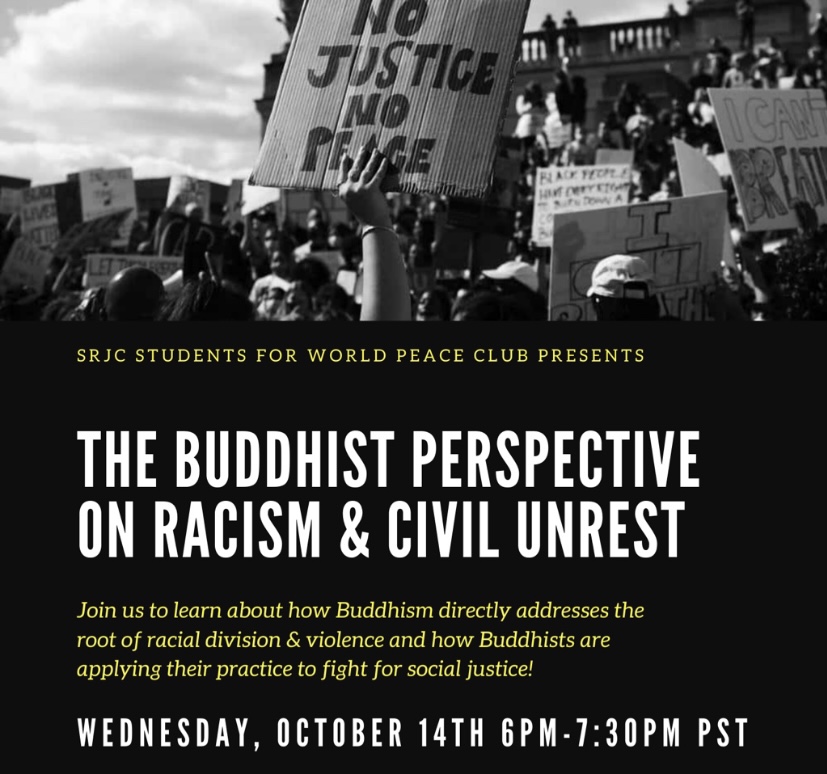 Santa Rosa Junior College’s Students for World Peace spoke with a group of 46 students and faculty about peaceful solutions to the violent cycle of racism and civil unrest through the lens of Nichiren Buddhism Oct. 14.

UC Santa Cruz graduate student Chris Lang identified understanding and extending empathy to others, confrontational love and a core belief in reincarnation as the key aspects of Nichiren Buddhism to aid global citizens in the era of racial capitalism in his presentation, “Buddhism, Racism, & Social Unrest.”

Citing Cedric Robinson, a former professor in Black studies and political science at UC Santa Barbara, Lang explained that humans have long sought cultural division, but it wasn’t until the transatlantic slave trade that anti-blackness became cemented into history, kickstarting the systemic racism we experience today.

Lang then explained the connection between colonization, which is enacted through different orders of supremacy, and the engine of capitalism, which is fed by natural resource and labor exploitation.

The search for the best practices to break the cycle of violence is a principal goal of Nichiren Buddhism. “To respond to violence with violence will only continue the cycle of evil, but to sit and silently endure will not get us anywhere,” Lang said. He connected it to the practice of chanting. “We chant to the Gohonzon to get the wisdom to be able to match with confrontational love when we see racism and other forms of oppression take place around us.” Gohonzon, translated directly from Japanese, means “object of devotion.”

“The event was enlightening and empowering,” SRJC President Dr. Frank Chong stated. “I was so impressed with our students’ knowledge about Buddhism and the way of non violence.”

Dr. Sarah Whylly, a Buddhism professor at SRJC, echoed Dr. Chong’s praise, “The event was engaging, timely and I believe so needed in order to offer people new modes of thinking that can help make changes both to our individual thinking and to collective thought.”

The Students for World Peace is a part of the larger Soka Gokkai International organization. According to Club President Ella Rappold, “On campus, our mission is similar to what it is in the organization, which is to empower people in their lives to win over their own negative tendencies, and those in their families and communities.”

“We believe in the philosophy that the most genuine way to achieve world peace is through each person’s heart,” Rappold said. “Within the club, we have these positive dialogues about intense issues, and people have been responding really well because we’re in crazy times.”

The club’s next event will be held on Nov. 11 from 6:00-7:00 p.m., focusing on the Nichiren Buddhist view of sickness, the pandemic and what genuinely constitutes health. Their recently launched site is aimed at youth and those new to Buddhism.