“No good cops in a racist system”: Protestors march for Breonna Taylor in Petaluma 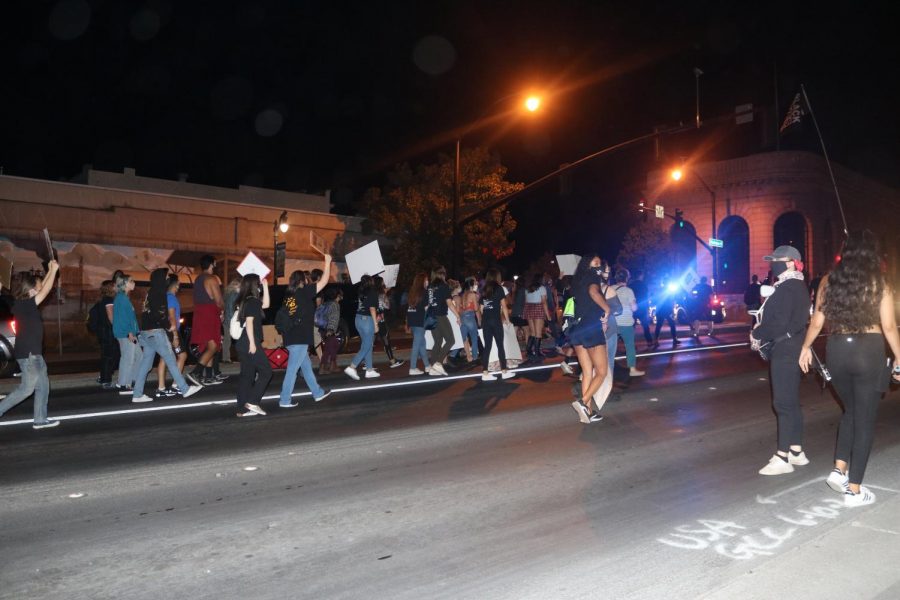 The march began in Putnam Plaza and moved through downtown and the Theatre District. The protesters consisted of all ages with even young children marching. Some held signs with slogans such as “ACAB” and “Breonna was asleep” written on them. As the protesters marched, their shouts of “Black Lives Matter,” “no justice, no peace,” and “no good cops in a racist system,” echoed through the streets.

Behind the march drove a white van adorned with the names and ages of police brutality victims such as George Floyd, Tamir Rice and Breonna Taylor. Among the names on the van was also 13-year-old Andy Lopez from Santa Rosa, who was shot and killed in Oct. 2013 by a Sonoma County sheriff’s deputy who mistook the airsoft rifle Lopez was carrying for a real firearm.

As the march moved through town, it attracted the attention of onlookers. Mia Harris, 16, a Petaluma High School student, was with her friends when they spotted the march on Liberty Street.

“We just stumbled upon it but we stayed because honestly it’s the right thing to do,” Harris said, “How Trump has handled social injustice and police brutality is insane to me.”

When the march moved to Petaluma Boulevard North, the protesters took a detour onto Water Street where restaurants such as Cucina Paradiso and Seared Steakhouse were holding outdoor dining. While the march didn’t directly interrupt the wait staff or those dining, a few guests voiced their frustration, shouting at the protesters who would occasionally shout back. Despite this, the march was generally well received by the crowd, with one man buying a pizza from Old Chicago Pizza for some of the protestors.

Cory Dominguez, an SRJC sustainable agriculture major, and his friend Brooke Finley were walking together on Water Street when the protest passed through.

“We protested in Santa Rosa during the height of the protests and I definitely appreciate more organization and push happening,” Dominguez said. “Having people go out and march still is good, because the reality is we can overlook things really quickly.”

Finley agreed with Dominguez and said, “I think it’s great and there needs to be more protests.”

As the march came to an end, the leaders of the protest called for a moment of silence and for everyone to raise their fists in solidarity. They then spoke to the crowd, stressing the importance of voting, specifically on Measure P, a measure on the November ballot in Sonoma County which would create more police transparency and accountability with civilian oversight.