“More lives could have been saved elsewhere”: Young Americans for Liberty Q&A and forum 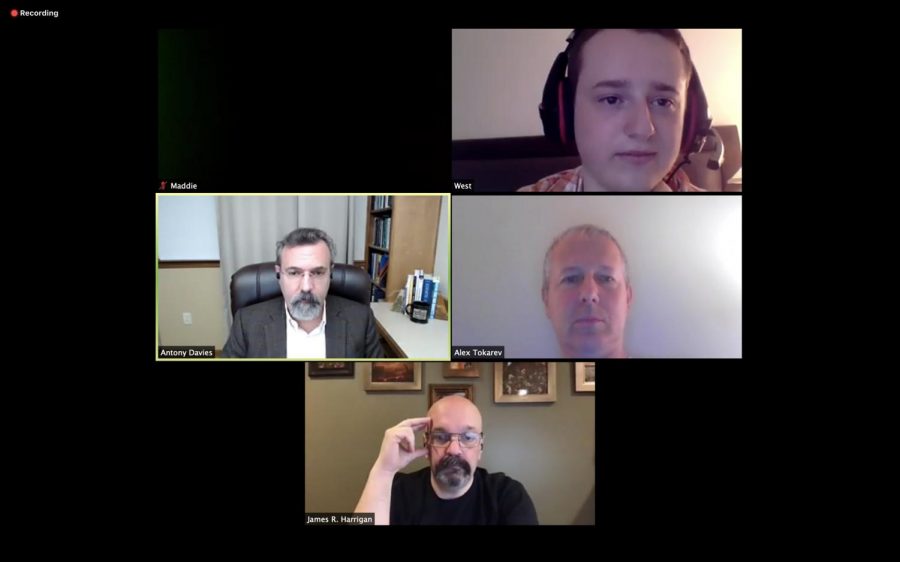 Young Americans for Liberty President West Below introduces speakers Antony Davies, James R. Harrigan and Alex Tokarev at the group's Lockdowns vs. Liberty Q&A session that questioned the benefits of shutting down the economy.

The Young Americans for Liberty invited three scholars to a ZOOM conference where 49 attendees, both students and non-students, asked questions about the legality and necessity of the coronavirus lockdown through the lens of economics.

Tate Jarrell, a second-year SRJC student, said “The panelists were amazing. Each person brought great perspectives to each question. I felt that I learned something from them.”

Panelist Antony Davies, the Milton Friedman Distinguished Fellow at the Foundation for Economic Education, said that while he understands the uncomfortable feeling many Americans have when comparing the faltering state of the economy with the number of coronavirus deaths, it’s something Americans do regularly on a smaller scale.

“When you choose to drive to work or to school, you increase the probability of dying, and you do that because it is more convenient than walking, which is actually safer,” he said. “It’s a decision we are all making every single day, a constant trade-off between some benefit, for some exchange of some probability of death.”

He admitted this view is unpopular but presented a counter argument to appeal to non-economists.

To illustrate his point, he turned to an example using the National Institutes of Health and the National Cancer Institute, two organizations with a combined budget of $45 million. Davies said the $10 trillion to $14 trillion lost to the lockdown “supposedly bought us 2.2 million lives,” or the projected death toll of COVID-19 in America. If this money had been given to those two groups instead — increasing their budgets by 300-fold — “more lives would have been saved elsewhere” than those lost to the coronavirus.

“You start to realize that shutting down the economy in the name of saving lives from COVID wasn’t the best use of our resources,” Davies said. “At a macro level, that is what we are doing here. We are asking the question: ‘How many people are dying versus how much are we giving up?’”

Davies spoke to the big picture while panelist James R. Harrigan, the director of the Center for Philosophy of Freedom at the University of Arizona, spoke about how the economic losses affect the individual.

“Even if you have a job, and let’s face it, you’re one of the lucky ones if you do… you should probably be thinking about alternate income streams in the course of your daily life,” Harrigan said, suggesting every American have more than one means of making money.

The third panelist wasn’t so concerned with the economic fallout, but with whether the government had the right to lockdown society at all.

Alex Tokarev, professor of economics and classical liberalism at Northwood University in Michigan, believes the federal government violated the Constitution by infringing on the way Americans conduct business, or “commerce” as it’s called in the country’s founding document.

Tokarev broke down how the Founding Fathers, the Framers, defined regulating commerce and said the federal government has no authority to obstruct the flow of business between U.S. citizens and the states.

“Even if the lockdowns were effective in saving lives, which they are definitely not, they would still be wrong, still be immoral, illegitimate and unacceptable on natural law grounds,” Tokarev said.

Then he went a step further.

“Any member of Congress that does anything above that is a traitor; they have to be tried for high treason,” Tokarev said. “I am not a Constitutional scholar but I understand the meaning of ‘regulate’ and ‘commerce.’”