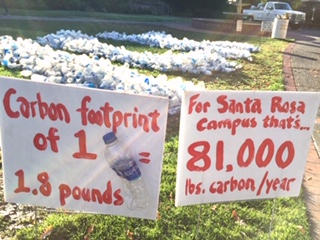 One of Guy Tillotson's demonstrations to enlighten students about the total cost of single-use plastic bottles.

Within the next five years, concessionaires at every community college in the state — whether they sell food at the cafeteria in Santa Rosa or from a coffee cart in San Diego — must swap single-use plastic utensils, cups and packaging for sustainable or reusable replacements, according to the statewide resolution. Plastic straws will remain available to people with disabilities.

The Student Senate will work with the chancellor’s office to enact the policy over the next four-and-a-half years.

“As students, we’re being bombarded with climate change every day. [Sustainability] is something we need to be focused on as student advocates,” said SRJC Vice President of Student Life Dakota McGranahan regarding his work with Sean Young, executive vice president of legislation and the resolution’s co-author.

It’s something SRJC Waste Diversion Technician Guy Tillotson has been focused on for years, and he’s thrilled at the progress.

“All those JC students have to work and do their units and serve in SGA and get through all the stuff they have to get through. It takes fortitude,” he said of McGranahan and Young. “It’s a big deal they got [the resolution] in front of the government body. It’s amazing.”

The five-year deadline will give vendors a chance to shop sustainable products and figure out how to absorb their costs while still turning a profit, without simply raising prices on students.

“The problem with [replacing] plastics is that we don’t have great alternatives on the market,” Tillotson said. “We don’t have true compostables that are acceptable by a local [garbage] hauler. That’s why the truly compostable ones are more expensive.”

Which is why sustainability legislation needs to weigh whether sellers and buyers, in this case vendors and students, can afford the increases and, if so, give them time to adjust.

“We’re not saying, ‘You guys are killing the Earth and need to change tomorrow,’ because that’s not reasonable,” Tillotson said.

McGranahan and Young understand this, too. “If vendors had to switch right away, they’d lose money and they might take their business elsewhere,” McGranahan said.

The increased costs won’t only come at the vendors’ and students’ expense, but at the college’s too. SRJC keeps a portion of the revenue generated from vending machine sales on campus. When single-use plastics are banned, the money from soda and water bottle sales will disappear too, according to Tillotson.

Tillotson’s presence is ubiquitous on the Santa Rosa campus, even if most students don’t recognize him. He’s the person who stages the coffee cup demonstrations reminding students that paper cups are not recyclable and encouraging the use of reusable thermoses. He’s the one who develops the what-goes-where pictorials that hang on the trash-recycle-compost bins.

In his role as waste diversion technician, Tillotson is responsible for managing the trash, recycling and compost that flows off campus. He sees it all — every coffee cup lid, every water bottle — from the student-generated trash in the library to the garbage left behind after events catered by outside vendors.

“Handling your internal events is extremely easy compared to external groups,” he said. “On campus we do zero waste events because it’s institutionalized, but when we rent out our space, well, it’s cheap meat and nacho sauce and plastic cups and styrofoam.”

“My point is not to complain; it’s just very hard to manage how waste comes into your system. And so you come in on Monday and there’s all this other waste that we don’t want,” he lamented.

That’s where the resolution comes in.

“It says that any ‘auxiliary enterprise,’ any off-campus vendor that comes on campus to sell or distribute, must use sustainable packaging,” McGranahan said. “In the JC’s case, that means Fresh & Natural or any food trucks, for example.” Tillotson noted it would also encompass national acts like the Harlem Globetrotters, who perform annually at Haehl Pavilion.

He has been working for years toward a single-use plastic ban and was in the throes of developing his own for the Sonoma County Community College District when the Student Senate approved McGranahan and Young’s version.

“We had a parallel process going on at the district sustainability committee level,” Tillotson said. “I drafted a single use plastics ordinance resolution at the same time Dakota [and Sean] brought forward theirs to SGA.”

While it might seem that two committees working toward the same goal duplicate efforts at best or run roughshod over each other at worst, Tillotson says that’s not the case at all.

And he would know. Not only is Tillotson intimately involved with the district’s sustainability attempts, he is part of Sonoma County’s Zero Waste Task Force, “a collection of people who work under the county to get sustainability initiatives done,” he said.

Because he sees the efforts being made at every level to outlaw plastics, from SRJC to the City of Santa Rosa and then up through Sonoma County, and because he witnesses the campus’s garbage, Tillotson appreciates the importance of attacking the problem from every available angle.

“The problem with the Santa Rosa campus is that we’re surrounded by fast food waste,” Tillotson said. “When I check the cans at the library, they’re filled with plastic straws from In ‘N’ Out, from Taco Bell.”

So even though McGranahan and Young’s resolution won’t impact the packaging choices made off campus — despite that garbage becoming SRJC’s problem — Tillotson said the resolution puts the right kind of pressure in the right spot: closer to the top.

“The thing is that the higher you can create an ordinance, the stronger it is,” he said.

A well-written ordinance at the right level can have a trickle-down effect. Going door-to-door to ask the JC’s fast food neighbors to switch to plant-based cutlery would be futile, but a government order encompassing the City of Santa Rosa, for example, would wipe out single-use plastics on campus in a single stroke.

“Business-to-business in Santa Rosa won’t work, but get a countywide ban and ‘Bang!’ It’s done,” he said of the ideal scenario.

But it’s not that easy, thanks to the sometimes complex relationship between the district, the city and the county, nevermind bureaucracy.

“County lawyers say we can’t do a county ordinance, so we’re going city by city,” Tillotson said, acknowledging the strategy to focus downstream when stymied higher up. “So we got city council members to move forward with a single-use plastics ban in Sebastopol, Windsor and Petaluma.”

According to Tillotson, the City of Santa Rosa hired a consulting firm to investigate a single-use plastic ban and passed its plan in January, but the implementation date is far out.

One level down from the cities, the district-level plan he’s working on was pushed back.

“But if the city can move its date forward, there might be a city ordinance before there’s a district ordinance, which means it could supersede the college’s efforts,” he said. If that were to happen, single-use plastics would disappear on campus by virtue of the campus being within the Santa Rosa city limits.

But sustainability efforts move in fits and starts, and they aren’t helped by the nature of student government officers’ one-year terms.

“College by college, struggle by struggle, a little group tries then they leave the JC,” Tillotson said. “It makes it hard. That’s why I try to keep the momentum going as a permanent employee.”

But this time, SRJC students matched his fortitude and commitment. Now, as Tillitson pushes up from the district level, McGranahan and Young’s resolution will push downstream from the state.

It’s a fragmented approach toward a massive, unwieldy problem, but it’s one that leaves room for — and may perhaps benefit from — a student-written and student-approved resolution.