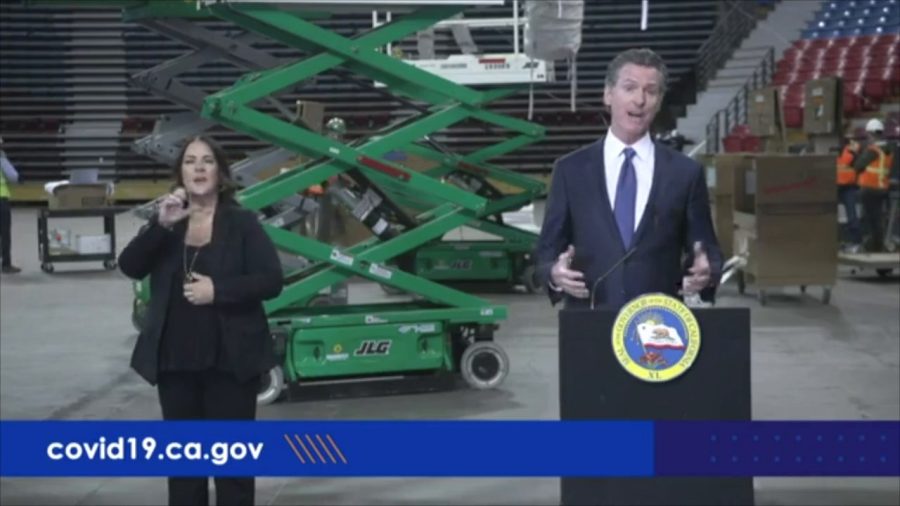 California Governor Gavin Newsom discussed the state’s multiphase plan to handle the expected peak of COVID-19 cases in mid-May at a press conference in Sacramento’s Sleep Train Arena on April 6.

“Phase 1,” as Newsom called it, consists of buying at least 50,000 hospital beds, plus ventilators and personal protective equipment for medical personnel, and establishing 20,000 beds in alternate care sites for people with mild to moderate COVID-19 cases.

Newsom’s “Phase 2” will be implemented if and when cases reach 50,000 and the state needs to utilize the extra beds and equipment.

Newsom began by reminding the public that California has been battling with COVID-19 since January when repatriation flights started arriving from China. Since then, state officials have been taking inventory of supplies and developing a plan to meet the needs of the eventual peak.

“We are well on schedule,” Newsom said.

In preparation for the surge in new cases, Newsom is also establishing alternative care sites that will provide  20,000 beds for people recovering from COVID-19 with mild to moderate symptoms. This will free up more hospital beds for acute care.

Newsom was speaking from one site under preparation.

The incomplete maze of white venting cylinders at Sleep Center Arena could be seen above him as he spoke. Sleep Center Arena should have 400 beds by April 20. Other sites include the Seaton Hospital in Daly City with 220 beds; St. Vincent’s Hospital in Los Angeles with 266 beds; the Fairview Developmental Center in Costa Mesa with 520 beds; the Porterville Developmental Center with 120 beds; and a San Carlos hotel with 120 beds.

Newsom also spoke about the increase in medical personnel through the Health Corps initiative established a week ago. The Health Corps recruits healthcare professionals with active licenses, public health professionals, medical retirees, medical and nursing students, and members of medical disaster response teams and deploys them where they can best serve the COVID-19 response. Newsom announced that 81,879 people have already filled out applications. Anyone who is able to apply is encouraged to do so at healthcorps.ca.gov.

In addition to medical personnel, Newsom spoke of California’s growing inventory of ventilators as well. California has increased its supply from 7,587 ventilators in the beginning of the year to 11,036 thanks to the acquisition of new ventilators and the refurbishment of old units, plus the 500 that have been loaned to the federal government on a conditional basis and can be called back.

Newsom said that the state has distributed 41.2 million masks already, and it is committed to procuring hundreds of millions more.

Newsom told the public their participation is necessary for the COVID-19 response to be effective. The plan is based on computer modeling that assumes people will be practicing physical distancing and sheltering in place.

“You are bending the curve,” Newsome said, although he was quick to remind Californians they must not let up now. “The model means nothing if we begin to step back and change our behavior by getting cabin fever and no longer practicing social distancing.”

Vivek Ranadive, the owner of the Sacramento Kings, the team that used to play in the Sleep Center Arena, praised Newsom’s leadership.

“Thanks to your actions, thousands, if not tens of thousands of lives have been saved,” Ranadive said.

Julia Ingalls, 23, a second-year student who works as a ranger at Doran Beach said, “The shelter in place order has protected a lot of people who would have to face the virus everyday.”

Another second year student, Annie Maddon, 23, said, “I’m happy to live here because our state seems to be taking this more seriously than most.”

Coronavirus in California, by the numbers

In California, as of April 8: