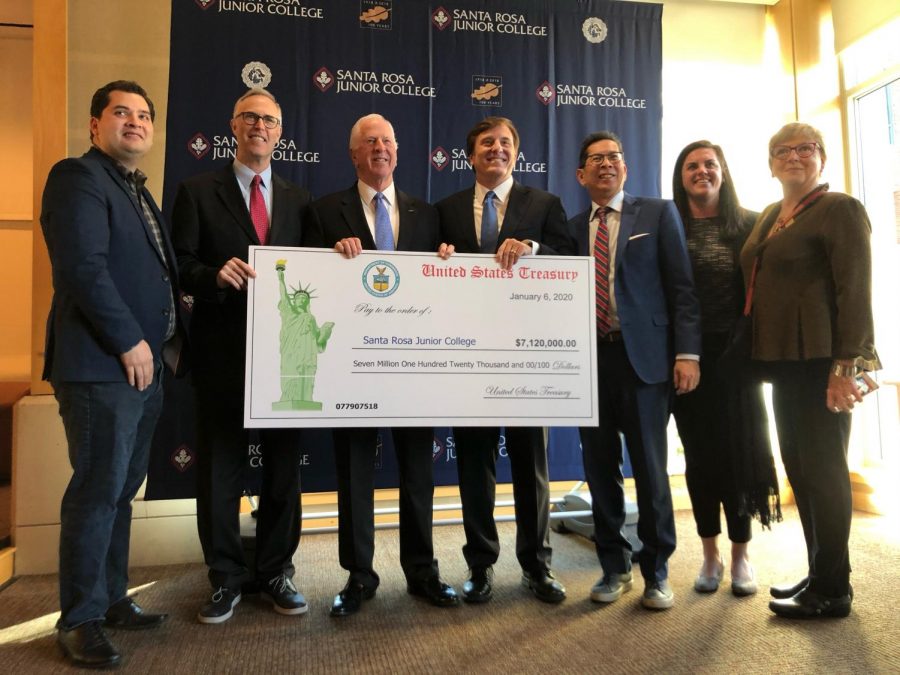 Santa Rosa Junior College received $7.12 million from the Department of Commerce Monday morning to build a vocational training center for careers in construction and related trades on the JC’s Petaluma campus to facilitate economic recovery in Northern California after successive years of fires.

Gathered in Bertolini Hall, U.S. Assistant Secretary of Commerce Dr. John Fleming and U.S. House Reps. Jared Huffman and Mike Thompson spoke to the crowd of citizens and leaders from across the region, describing their efforts as “a win-win for the community.”

The Department of Commerce also presented Paradise, California, a town almost entirely destroyed by the Camp fire in 2018, with a check for $300,000 to recruit and hire a disaster recovery manager.

Fleming said the department’s action wouldn’t have been possible without the hard work and dedication of countless local leaders throughout Northern California.

SRJC President Frank Chong said he was considerably proud not only of SRJC, but of all the Northern California communities working together to address adversity faced in the fires’ aftermath.

He noted that the SRJC is “one of the key centers of workforce development,” and that it made sense money was flowing where it would be most impactful.

The money will fund the North Bay Regional Construction and Building Trades Employment Training Center, with completion expected in January 2022. In addition to the Economic Development Administration’s grant, local investors have put $1 million toward the project.

At the moment, there is no facility with adequate lab space for regular trades training accessible to SRJC in Sonoma County. This facility addresses the gap of 3,600 prepared workers for jobs in construction and trades annually.

“The center, operating at full capacity, should be able to produce up to 500 skilled job seekers each year, which will make a big impact on the critical shortage of trained workers in the construction industry,” said SRJC Director of Regional Adult Education Programs Nancy Miller.

The hope is that getting more potential trades workers the education they need will help the region not only recover from the fires more quickly, but will also boost the economy and drive housing prices down to more reasonable levels by increasing the number of houses on the market.

Huffman and Thompson relayed to the audience the impacts that the funding would have on their communities and thanked the federal government for its support, despite the myriad political and philosophical differences that separate California from the Trump administration and its appointees.

“We obviously don’t agree, but it’s important that the parts of our government that function continue to function. This will be good for our economy and our environment,” Representative Huffman said. “You take your wins when you find them.”

Despite the civility, partisan conflict was apparent onstage.

In his speech, Fleming was enthusiastic about the Tax Cuts and Jobs Act of 2017, claiming it had created jobs and boosted local economies across the nation.

The bill has prevented Californians from the ability to claim state income tax as a deduction from their federal income tax returns, effectively double-taxing them.

“The tax bill has provided a lot of work for us, so thanks for that,” Rep. Thompson said to Fleming onstage, alluding to the political battles being waged over the bill in Washington.

There were chuckles in the audience.

“He said something that I felt wasn’t true, and I felt compelled to say something,” Thompson said later.

He noted that despite their disagreements, he, Fleming and Huffman are still able to work together for the betterment of the country.

Fleming agreed. “You know there’s no question that we have a very divided country right now. They’re Democrats, I’m a Republican, but when it comes to natural disasters and unemployment, we’re all pretty much on the same page with that.”

In his role at the EDA, Fleming promotes “opportunity zones,” or federally and state-recognized low income areas where individuals or corporations can invest and avoid paying capital gains taxes on the investment for up to 10 years.

Roseland, the once unincorporated region of West Santa Rosa, is one such tract.

After the conference, Fleming, Thompson and Huffman went upstairs to the Career Development Center in Bertolini Hall and met with local leaders from all over Northern California to describe to their federal colleagues the hardships the region has endured post-fires.

Thompson was pleased with the result.

“This administration has done a good job here from day one. [They] gave us all the money and resources we needed to put out the fires quickly and begin to recover,” he said.