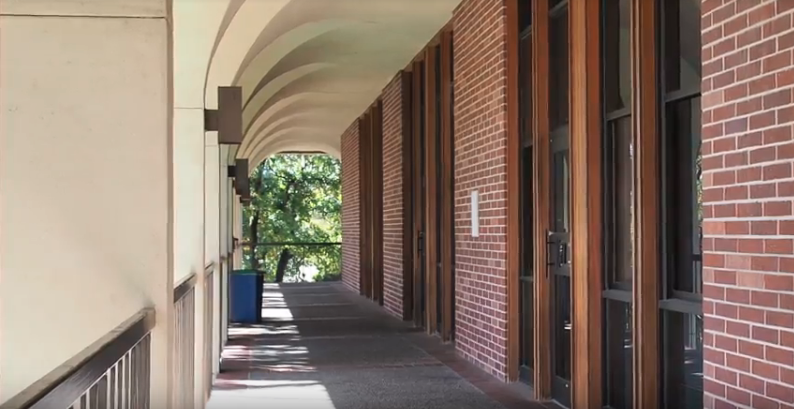 Most of the classrooms in Emeritus hall have broken or nonfunctioning locks that are safety hazards in lockdown events.

Santa Rosa Junior College students took shelter in some classrooms with malfunctioning, broken or non-existent locks during a campus lockdown Oct. 22, despite years of safety committees and administration promises to upgrade campus security.

“I have been begging for locks on the doors in Emeritus since 2005. It’s been ‘in the works’ for almost 15 years,” said interdisciplinary studies instructor Jill Kelly-Moore in an email to SRJC staff.

Instructors who teach in Barnett, Emeritus and Maggini halls reported the most problems with their lock systems.

“It’s very disturbing to have a conversation with my students on the first day of class about how to get home alive if there is a shooter. 1519 Emeritus is facing Elliot [Avenue], has all glass windows and [only] one exit which cannot be locked.”

SRJC District Police initiated a lockdown after a Ridgway High student was shot a quarter mile from the Santa Rosa campus, and police were searching for the suspect and weapon. After interviewing witnesses and reviewing surveillance footage, Santa Rosa Police arrested a 17-year-old student who had returned to a classroom after hiding the gun in a backpack and giving it to a friend to dispose of.

Due to liability reasons most instructors are not given a key to their classrooms, and are unable to lock them from the inside. When instructors could not lock their door during the lockdown, it became district police’s responsibility to lock them in from the outside.

English as a Second Language faculty member April Oliver said police did not lock  Barnett Hall until at least an hour and a half into the lockdown.

“The ESL Department has requested locks on the doors since the Oregon community college shooting in 2015,” she said. “We instructors can neither lock the doors nor barricade them because the doors open to the outside.”

At Maggini Hall, business instructor Albert Yu and administrative assistant Kristen Dalby walked around the building locking classroom doors from the outside. While Maggini’s doors have small allen keys on chains near the doors to lock them from the inside, some instructors said they are tricky to make work with the bar-style locking system.

On Jan. 22, 2019, SRJC President Dr. Frank Chong said new locks would be installed by April 20 — six months ago — and that Emeritus Hall was first on the to-do list because it had the most doors with malfunctioning or broken lock systems.

As of Oct. 22, only the staff offices within Emeritus had manual door locks installed, and student classrooms still remained unlockable from the inside.

A majority of instructors who teach in Emeritus don’t have access to keys to lock the outside of their classrooms. During the lockdown faculty members Lori Derum and Jergen Kremer risked their well being when  they locked all the doors in Emeritus Hall after police announced the lockdown.

“Other than the rooms with computers, none of the classrooms can be locked from the inside. Most instructors don’t have a key to lock the outside,” said English instructor Nancy Viega.

Instructors say administration inaction in upgrading the lock system combined with the lack of classroom keys forced teachers and students to protect themselves during the lockdown.

History instructor Warren Metzger’s classroom of 25 students barricaded the door five feet high with desks, knowing the door could be opened from the outside and that their barricade  could be their only line of defense.

“The disappointing thing is the structure of the doors in Emeritus,” Metzger said. “This is something the campus has talked about that has never happened.”

Once campus police and faculty members locked the door from the outside, Metzger’s students had no way of getting out of the classroom except by hopping out of windows after the lockdown was lifted.

“Dr. Chong trivialized and normalized the trauma people experienced while being in a lockdown from potential gun violence,” she said. “A lockdown is not normal and the coping skills we normally use to deal with normal stress is not adequate for all people.”

President Chong absorbed complaints from the SRJC community and acknowledged the need to make upgrading Emeritus a bigger priority.

“It’s never soon enough. If I was a teacher in a classroom [in Emeritus], I would say we have to do this today,” Chong said.

Chair of Behavioral Sciences Brenda Flyswithhawks understands the bureaucratic nature of campus upgrades and defended the administration’s timeline. Flyswithhawks and a safety committee on which she sits proposed various changes in fall of 2018, including upgrading the lock systems campuswide. She said the interior lock system upgrades in Emeritus Hall are a step in the right direction.

“That is an improvement. We did not have that before. Some of the faculty members that have been screaming in the emails didn’t mention that,” Flyswithhawks said.

After this event, Flyswithhawks plans to propose a new work group that makes sure progress on safety measures happens, and she continuously monitors administrative action on this issue.

“That’s what we have to be more proactive at [safety]. And Dr. Chong has to be the one that’s responsible because he’s our leader,” she said.

According to President Chong via an email sent Oct. 23, installation of new electronic locks will begin on Oct. 28 and the expected completion date will be January 2020 for Emeritus, Call, Maggini, Analy and Barnett halls on the Santa Rosa campus and Shone Farm.

Faculty members such as history instructor Anne-Marie Donegan can only hope the administration doesn’t go back on its word.

“When I say in meetings that people can’t lock our classroom doors, people are shocked. We’ve been telling the district this for years,” she said.