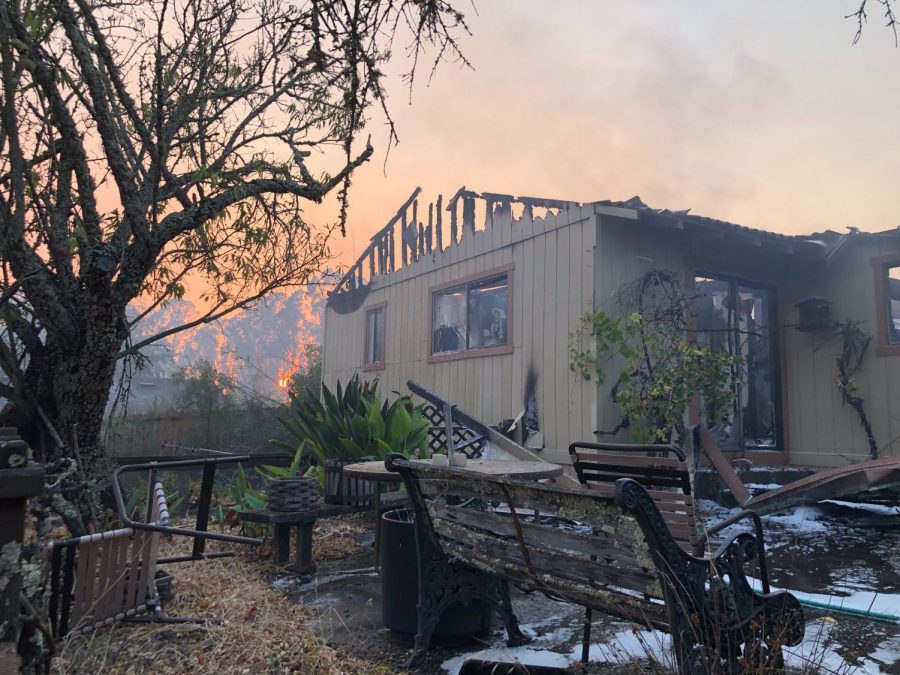 The exterior of a Windsor tract home remains surrounded by the ashes of personal belongings and outside furniture on Brooks Road.

Santa Rosa Junior College is unable to disburse financial aid funds to financial aid recipients as planned on Oct. 30 due to campus closings in the wake of the current, county-wide wildfire situation.

Students will receive disbursements once the district reopens and staff return to campus, according to an email sent by SRJC Student Life.

According to the Student Financial Services payment calendar, the two major payment days are at the beginning and midpoint of the semester. The most recent disbursement date was Oct. 16, with the next disbursement date of Oct. 30 now on hold.

Santa Rosa Junior college announced the closure of all campuses until Nov. 1 in a campus-wide email.

All classes, including online, and activities are also canceled.

Four events were canceled this week due to the school closure: the 12th annual Halloween Party, hosted by the ASL Club, on Wednesday and the Financial Aid Fair, Club Day, hosted by Student Government Assembly’s (SGA) Inter-Club Council (ICC) and the Halloween Boo Bash, hosted by M. E. Ch. A and the SGA Student Life Committee (SLC) on Thursday.

The Sonoma County Sheriff downgraded the mandatory evacuation for Sebastopol, Twin Hills, the unincorporated areas of Santa Rosa, and the Lower Russian River communities that stretch from Forestville to the Pacific Ocean on Monday.

Residents were notified via Nixle that they could “return home now at your own risk.”

Those who return home will spend the night without power or natural gas. Residents who rely on well water will be unable to pump water unless they have access to a generator.

The sheriff reminded those who return to listen for hi-lo sirens, an alert that the area is being evacuated again.

The downgrade to a warning zone does not mean the danger has subsided. The sheriff’s office is clear that “this area is still at risk from the Kincade fire.”

According to the NWS, conditions will not be as severe as they were Sunday into Monday, but they will “still bring critical fire weather conditions to the Bay Area.”

Reporting by Lauren A. Spates.

The three neighborhoods were under evacuation warning until 10:40 p.m. Sunday night when the request became mandatory. Residents who remained home were instructed to “evacuate immediately,” per the county-wide Nixle alert.

The sheriff’s office initially called for five engines to fight the growing blaze on both sides of Faught Road, then ordered all available crews to report to the Luther Burbank Center for staging. Twenty minutes later, the office requested two more water tenders to support the crews on site.

The area is of extreme concern to authorities and residents as it is in close proximity to Highway 101, the only barrier between the Kincade fire and hundreds of acres of rugged woodland, which leads to the Pacific Ocean, approximately 18 miles away.

Reporting by Lauren A. Spates

Offshore winds, particularly in the valleys surrounding Sonoma County, are expected to die tonight according to a National Weather Service update on Saturday.

Santa Rosa Junior College announced a closure of all SRJC campuses at 1:24 p.m., for both in-person and online classes, and canceled all activities through Oct. 29 due to the impact of Kincade Fire.

Cal Fire urged residents in mandatory evacuation areas to leave as soon as possible during the press conference today. PG&E warned citizens to take the warnings seriously and head to evacuation centers.

This evacuation center is making a point to be inclusive of all demographics, and will not be letting services such as ICE investigate without a subpoena.

Cal Fire will hold a press conference tonight at 6:30 p.m. at the Kincade Fire Base Camp on 1350 Bennett Valley Rd. to discuss tonight’s historic winds and share safety measures.

Fire crews conducted controlled burns along Pine Flat Road in Healdsburg Saturday evening as they prepared for fierce winds Saturday night into Sunday morning, according to Sacramento fire authorities on the scene.

“Fires burning in the wind, that’s probably our biggest opponent out there: Mother Nature,” Lopez said.

The Kincade fire destroyed more than 25,000 acres and is 10% contained as of Saturday evening.

PG&E delayed its planned power outage for Sonoma County until 5 p.m., but residents across the county reported they still had power after the projected shut-off time.

San Francisco National Weather Service meteorologists said today will be “the calm before the windstorm” in a statement released Saturday morning.

“I wouldn’t be surprised if we saw gusts between 80 and 85 mph,” NWS meteorologist Drew Peterson told the Washington Post.

Santa Rosa Fire Department announced red flag and high wind warnings for Sonoma County Saturday night through Monday morning in accordance with the NWS report due to the powerful winds and mandatory and warning evacuations for northern Sonoma County.

The red flag warning indicates increasing fire risks because of the likelihood of winds and low humidity that could produce “historic” weather conditions Saturday night into Sunday.

Cal Fire ordered the evacuation of Healdsburg and Windsor Saturday morning, instructing residents to leave before 4 p.m. Saturday evening and drive south to any of the three evacuation centers set up in Santa Rosa and Petaluma.

As a result of the evacuation order, Santa Rosa Junior College cancelled all activities and classes for Saturday, Oct. 26 at its Public Safety Training Center in Windsor.

The Highway 101 corridor from Geyserville south through Windsor and all areas east to Chalk Hill Road are included in the order, as is Highway 128 in the North Knights Valley area to the Napa County line.

SRJC student Ian MacGregor works at Whole Foods in Coddingtown Mall and said the store has been selling out of ice and bottled water for days as residents prepared for PG&E blackouts.

The Kincade fire has scorched 21,900 acres at 5% containment and destroyed 49 buildings, according to a recent Cal Fire report. Hot, dry winds from the northeast – called Diablo winds – accelerated the speed of the fire Wednesday night, but the winds subdued by Friday morning.

Cal Fire anticipates winds will pick up again Saturday. The agency hopes to gain ground today before the next windstorm.

Santa Rosa Junior College cancelled all outdoor activities through Oct. 27 due to poor air quality from the Kincade fire. SRJC anticipates an Air Quality Index (AQI) of 110, which the EPA said is “unhealthy for sensitive groups.”

AQI is not considered hazardous until it reaches 301, but the AQI required for a college closure is only 201.

SRJC has not yet cancelled its scheduled sports games for the weekend for women’s volleyball and soccer.

“We’re not looking at a large offshore breeze like last night,” said Jonathan Cox, Cal Fire division chief and informational officer. “We’re not in a red flag now, but there will likely be another red flag this weekend.”

As of 7 p.m. Thursday, the fire was 5% contained and claimed 21 homes and 28 outbuildings. Officials reported zero fatalities.

The fire is now “topographically driven,” Cox said, meaning it will progress based on the physical features of the land, not because the wind is pushing it around. If it takes hold on the lower end of a slope, the fire will then “make a run [up the hillside] and then slow down and kind of skunk around until it finds another drainage.”

Reporting by Dakota McGranahan and Lauren A. Spates.

Oak Leaf staffers visited sites around the Kincade Fire today as it burned 10,000 acres in the northeastern part of the county. View the gallery here.

Firecrews struggled Thursday afternoon to contain the blazes that stretched along Alexander Valley Road all the way through Dry Creek Rancheria, including a possible hazardous materials fire outside River Rock Casino.

Meteorologists with the National Weather Service in San Francisco announced a fire weather watch for Sonoma County for Saturday night through Monday morning due to powerful offshore winds, indicating fire weather conditions still exist despite the end of the red flag warning.

“This event looks to be the strongest of this year and since the 2017 wine country fires,” NWS meteorologists said in a statement.

The forecast for Sonoma County shows northeast winds of 15 to 30 mph with frequent gusts from 45 to 55 mph and local gusts from 65 to 75 mph on peaks including Mt. Saint Helena and Mt. Diablo.

Residents are encouraged to listen for additional forecasts, red flag warnings and information from local authorities.

Reporting by Dakota McGranahan and Lauren A. Spates.

SRJC campus somber as fire rages in nearby Geyserville

SRJC students arrived on campus Thursday morning with mixed feelings about the Kincade fire burning less than 20 miles away.

Tati Lemus, a first-year SRJC student, felt anxious. “It really sucks this keeps happening every year,” she said, “and I feel like it’s probably not going to stop even if PG&E continues shutting off the power.”

Gabriela Moran, 23, said she wasn’t personally affected by the fires two years ago but she “feels bad for the other people who are impacted right now.”

Peter Jeno, a digital media student, summed up his anguish when he said, “What’s even left to burn?”

The structure fire in Fountaingrove near Stonefield Lane is contained, according to the Santa Rosa Fire Department.

Firefighters are responding to a structure fire in Fountaingrove near Stonefield Lane, according to the Santa Rosa Fire Department.

Witnesses report a large column of smoke rising from the structure.

The brushfire at Trione-Annadel State Park is contained but firefighters will remain on the scene to watch for hot spots, according to authorities.

“This time of year, fire is always a worry,” said Cindy Shafer, environmental scientist for California state parks. “We work with all the local agencies if there is an incident.

Santa Rosa Junior College classes at Healdsburg Community Center are cancelled until further notice while the building is used as an evacuation center, according to Kimberly Starke with SRJC Disability Resources.

Ariel Kelley, CEO of Corazón Healdsburg, a group that works at the community center, said she knows of SRJC students who are affected by the Kincade fire.

“For those students…we have resources here that are available,” she said. “We’re running an intake process for anyone who has suffered any financial loss so they can come in and sign up and we’ll provide a $50 gift card to them immediately and also throughout the recovery process.”

Sonoma County’s Kincade fire ravaged more than 10,000 acres and is 0% contained as authorities ordered evacuations Thursday morning for hundreds of homes in the Geyserville area, according to the California Department of Forestry and Fire Protection.

The agency said the brush fire began Wednesday at 9:30 p.m. and spread quickly.

Residents have reported major ash falling and thick smoke in the area.

The Kincade fire comes days after a red flag warning was issued for the region and the same day Pacific Gas & Electric started planned blackouts in parts of Sonoma County.