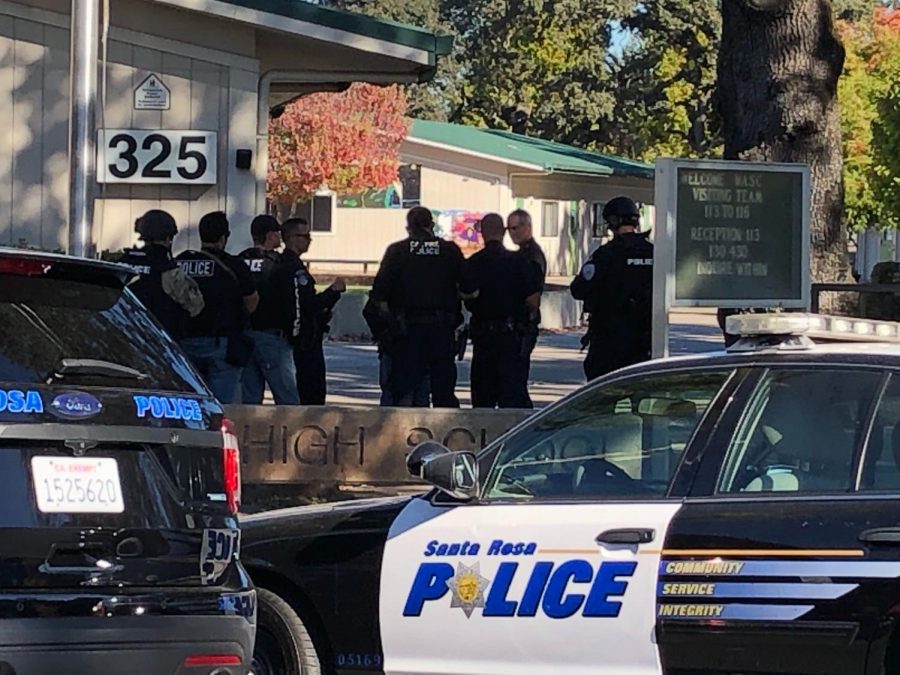 Local law enforcement huddles in front of Ridgway High to plan their entry into classrooms.

Santa Rosa Junior College locked down its Santa Rosa campus Tuesday morning after one student at neighboring Ridgway High School shot another, disposed of the weapon, then slid back into class where he was later arrested.

“At this point, the information that we have is that the victim is in stable condition. He has two gunshot wounds to his upper body,” said Police Capt. John Cregan.

According to Cregan, a verbal altercation occurred between the suspect and the victim prior to the shooting. The 17-year-old suspect shot the 16-year-old victim, then gave the gun to an unidentified person who left the Ridgway campus.

The weapon has not been found. The suspect was identified through surveillance and arrested in his classroom.

“[My first thought was] what? Why is this happening?'” Evan Hatton said.

Multiple students shared their experience via social media. Snapchat videos showed darkened classrooms, with students’ faces lit only by the blue light of their devices while they tracked the developments online.

But for students and instructors in Emeritus Hall, the lockdown was not as calm.

According to social sciences professor Anne-Marie Donegan, two instructors jeopardized their own safety when they left the “locked confines of the Emeritus Service Center” to manually lock classroom doors throughout the building. Many rooms in the building only lock from the outside, leaving the students and instructors inside vulnerable to intruders.

This was the case with Newman Auditorium, a space that held 190 people for a morning lecture when the lockdown announcement broke.

“I want to thank Lori Derum and Jurgen Kremer for…locking all the doors of the Emeritus Service Center and Newman Auditorium,” Donegan said. “True heroes in my book.”

SRJC authorities lifted the lockdown at 11:37 a.m. but because instructors in rooms with external locks could not open the doors on their own, some students left the building through open windows.

Parents Brandon and Jessica Bayer have a son who attends Ridgway and shared similar thoughts about the continuation school with a campus that abuts SRJC’s Santa Rosa location. They stood on a nearby street waiting for news after their son Andy texted them about the lockdown.

Jessica Bayer said her son was “scared shitless, but that’s to be expected.” Andy reported that authorities made an arrest, but Jessica Bayer was not relieved.

Both parents complained about Ridgway’s reputation as a violent school, and neighbor Susan Dayton wondered when officials will move the school to a non-residental area.

“He’s not coming back to this school,” Jessica Bayer said. “He’s getting his GED. He’s done.”

After confirming no further threat existed, Chong reminded recipients “It is natural to feel anxious during and after a lockdown,” and he reminded them to “reduce this anxiety by using any healthy coping skills you normally would use to deal with stress.” He also directed anyone who needed to speak to a professional therapist to visit either Student Health Services or Employee Assistance Services.

Through a Nixle emergency alert, SRJC District Police instructed students to “find a safe location out of sight, away from windows, and barricade yourself behind secured doors. Remain quiet. Listen for and follow instructions of emergency personnel. If not on campus, do not return to campus.”

During the lockdown, students from all three campuses posted to social media.

Ridgeway students filmed video of officers entering classrooms with guns drawn. Another said “lights off, under table, curtains closed” as they panned their classroom for Snapchat.

A Santa Rosa High student reported on Snapchat that students were sitting under their desks eating candy and being quiet as they waited for the lockdown to be lifted.