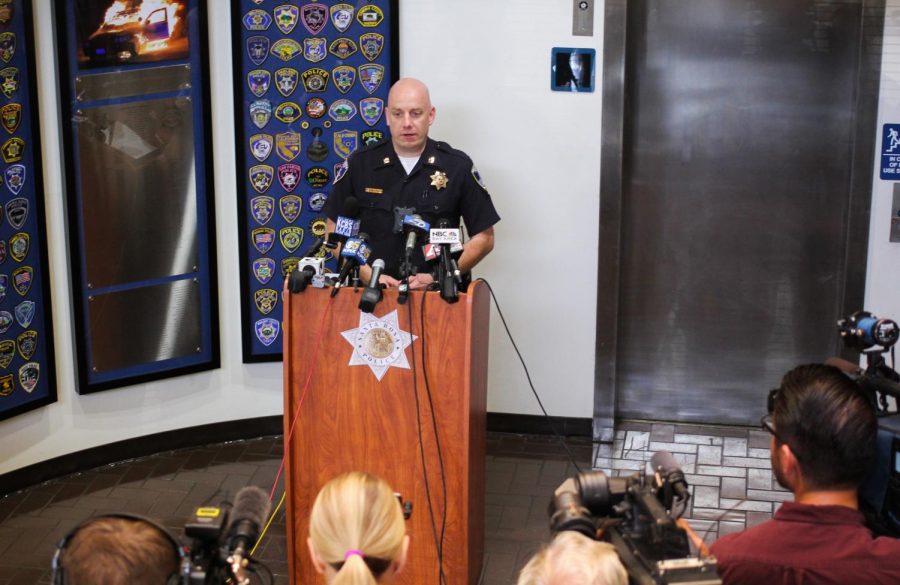 Capt. John Cregan updates the public with information about the shooting on Oct.22 at Ridgway High School.

The 17-year-old suspect in the Ridgway High School shooting this morning put the gun in a backpack, gave it to a fellow student and returned to class, Santa Rosa Police Department Captain John Cregan told reporters at a 1 p.m. press conference.

The shooting occurred at the intersection of Morgan Street and Ridgeway Avenue at 8:56 a.m.

“The evidence suggests that they had a verbal altercation on the school grounds. The suspect produced a handgun firing multiple rounds,” Cregan said. “The shooter had handed the gun to another individual and that individual left the school campus with that firearm.”

The search for the gun is ongoing.

The 16-year-old victim fled the scene in a red car and drove himself to the hospital. He was treated for two gunshot wounds to the upper body and is expected to survive, Cregan said.

All Ridgway students were detained after police confirmed the suspect was in one of the classrooms.

According to Cregan, SWAT units pulled the suspect out of the classroom based on information from two witnesses and video surveillance, and in coordination with school staff.

He said it is too early to determine if there was gang involvement.

“This is a rapidly evolving investigation,” Cregan said. “It appears this was an isolated incident of violence between those two individuals.”

Agents from the FBI and the Bureau of Alcohol, Tobacco, Firearms and Explosives arrived on scene to assist the investigation.

Cregan told reporters, “The FBI, as matter of routine, assist in any type of shooting on a school campus.”

Officers briefly detained another student who was later released after police confirmed he was not involved.

Police declined to release the name of the suspect and victim because they are juveniles.