SRJC students respond to anti-abortion activists with games and music 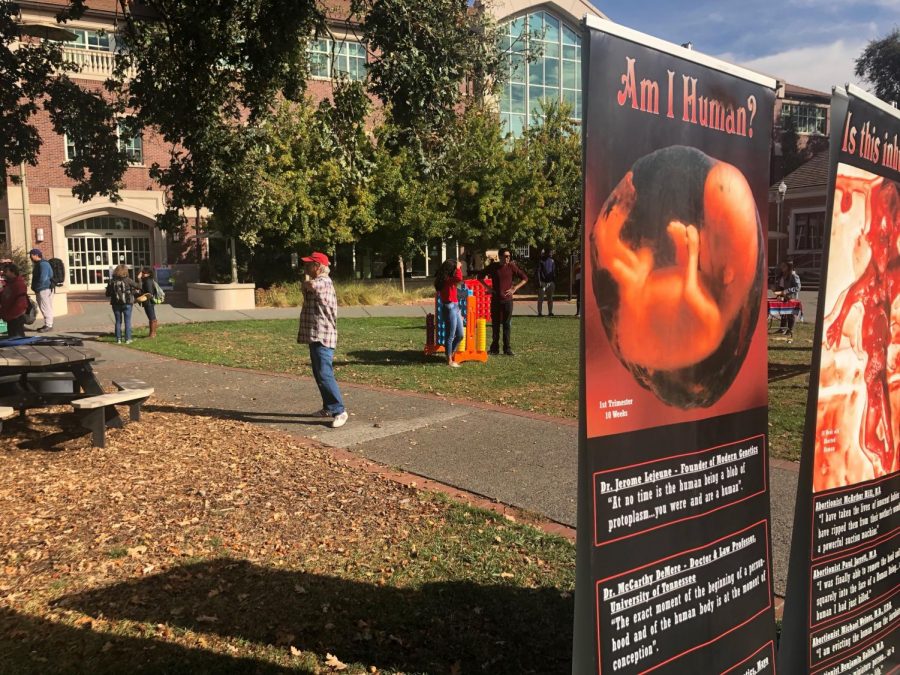 SRJC students try their best to ignore the graphic images surrounding them. Music and games can be excellent distractions.

Santa Rosa Junior College students responded to a second day of aborted fetal imagery by playing games and music in the quad right next to the pro-life activists from Project Truth.

Student Government Assembly members decided to continue their weekly “Wild Wednesdays” as planned, despite the tensions between students and pro-life activists.

“I was hoping to make light of things,” said SGA Vice President of Marketing Sebastian Bustamante. “I wasn’t going to give up our ‘Wild Wednesdays’ just because students felt uncomfortable.”

Bustamante wanted make a comfortable setting out an uncomfortable situation and give students a feeling of someone “having their back.”

Games of ring toss, Connect Four and Jenga were set-up in the grass, and soulful music was blasted from SGA speakers. Members of SGA even wheeled out a “Free Speech” whiteboard for students to voice their thoughts and feelings in a safe space.

SRJC students Sonali Langlois, 19, and Sahil Prasad, 20, smiled and played Jenga, completely ignoring the posters of aborted fetuses all around them.

“It’s a lot better than yesterday; having music and stuff is kind of distraction,” Langlois said.

Prasad agreed. “I think it brings a real positive vibe to campus. We would rather be playing Jenga than seeing that,” he said, referring to the graphic material.

Sean Young, SGA executive vice president of legislation, noted that this particular “Wild Wednesday” was a little bigger than usual.

“We’re just trying to provide an environment where students don’t feel afraid to walk through here with these images,” he said.

The members of Project Truth declined to give their last names and ages.

They were pleased with the relative civility shown by the SRJC community.

“I mean it’s pretty typical for the other side to respond and express their ideas. A civil discussion is always what we strive for,” said Alex, a younger Project Truth member.

John, a Project Truth team leader, said overall the event went really well. He pointed out each of his fellow Project Truth members deeply engaged in discussions and debates with people on campus.

“I look forward to coming back,” he said