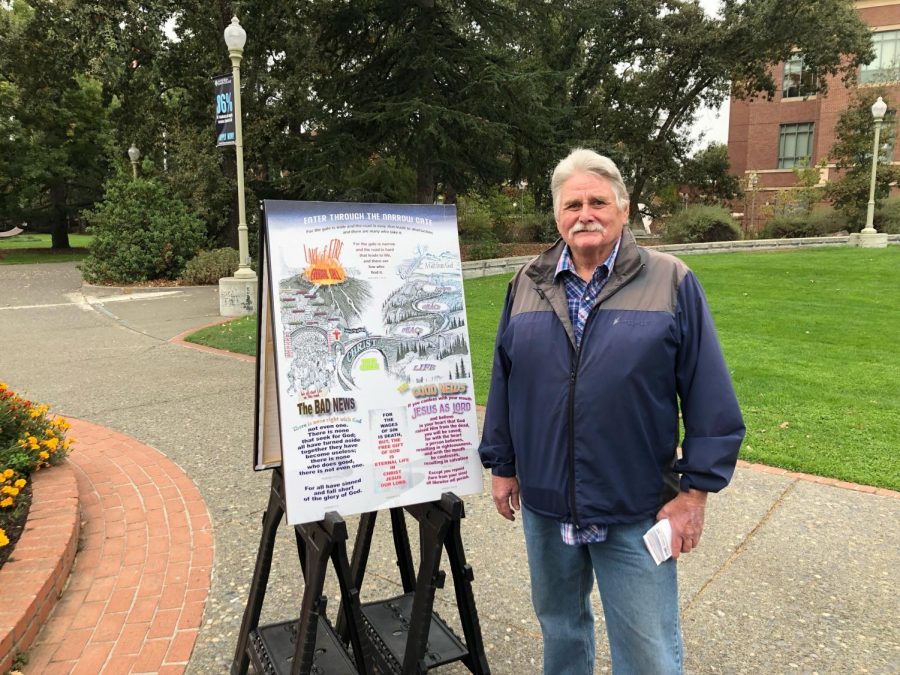 SRJC’s Dean of Students, District Police officers and members of a campus peacekeeping team were on site to ensure civility and support emotionally distressed students. Dean of Students Robert Ethington was pleased with the composure of the event.

Many students and faculty were not as pleased.

“It’s a whole bunch of men out there showing me pictures of little messed babies, who are most likely [from] women with drug issues, too young or just can’t have a kid,” she said.

Jerard Christensen, a 22-year-old student, disapproved of the demonstrators but was ambivalent over the imagery, “It’s ugly. It’s gross. [But] that’s life.”

“They kept bringing up [innocence]. [A fetus] doesn’t say anything. It’s just a just bumble of cells. Is a pancreas innocent?” he said.

The members of Project Truth declined to give their ages and last names for fear of reprisal.

“People find you and start writing nasty things on Facebook,” said Bud, an elderly member of the group.

The members hail from all over Northern California, with churches funding some of their trips. Others pay for their expenses out of their own pockets.

“I started five years ago,” said Doug, one of the leaders of the group from “somewhere up in the mountains.”

Doug converted to Christianity 23 years ago after a lifetime of “drinking” and “laying with women.”

“I myself spread [the gospel]. We are all sinners. We all fall short of the glory of God,” he said.

“Seven things you need to know,” he said to each passerby as he attempted to hand out pamphlets bearing that title and including seven tenets of the Christian faith.

Some students took the pamphlets, some ignored him and some insulted him with profanities. Doug always had a wry smile on his face.

“They have little pet names for us,” he said. “I love people in general, so I don’t have a problem. We get a lot of resistance, but that’s the reason we’re here. We cherish the unborn babes.”

Another Project Truth leader, John has been with the pro-life movement for 30 years. He thinks things have actually gotten better over time for the movement.

“People in this generation are a little more open,” he said. “The sad thing is a lot of people haven’t even seen what an abortion looks like.”

According to John, Project Truth experienced vulgar screaming and sexual harassment at San Francisco State University, one of the group’s worst experiences.

“If I had said the things they had said, I’d be in jail and with good reason,” he said.

The group alleges they regularly deal with assaults at their events, but their consensus seemed to be that, for the most part, Project Truth is making a positive difference.