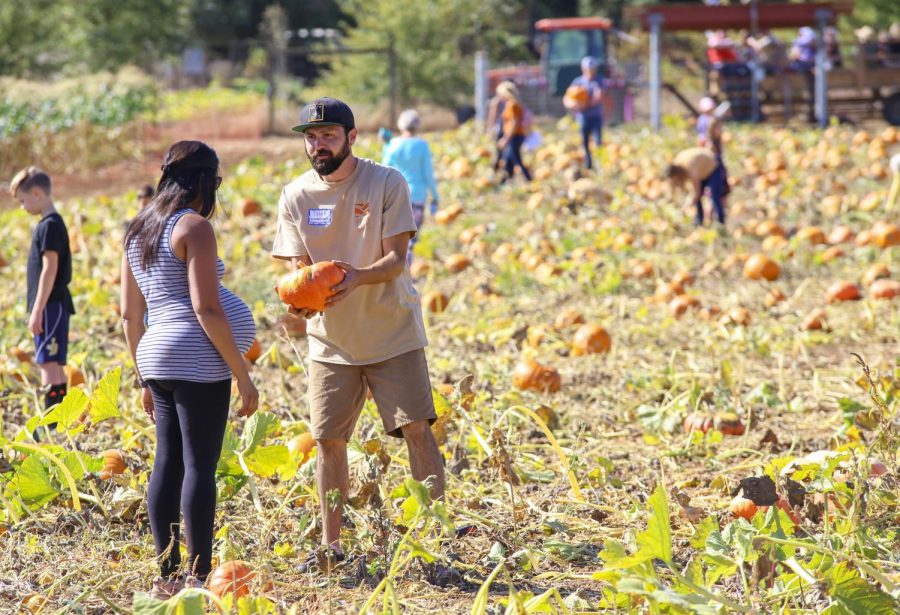 At every Shone Farm Fall Festival, the pumpkin patch attracts crowds of guests from all over Sonoma County and volunteers assist guests with cutting and carrying their pumpkins to the checkout stand.

Santa Rosa Junior College kicked off its seventh-annual Shone Farm Fall Festival on Saturday, Oct. 12, opening its doors at 10 a.m. with fun-filled rides, games and festivities for the local community.

Craig Wilkinson, an SRJC agriculture intern, was one of many students who volunteered to help with the production of the festival.

“It was so cool I was about to cry,” said Wilkinson.

The land, water and equipment provided by Shone Farm allow Wilkinson to grow his dye, resources he says he’s grateful to have.

“How did anyone figure [indigo ink] out? It’s really cool that he is keeping that tradition alive,” said Bush Crispo.

Angela Southard, a sustainable agriculture student and a festival volunteer, assisted with the supervision and distribution of pumpkins at the pumpkin patch.

“I love seeing kids get so excited about pumpkins. I remember how excited I was when I got to pick out pumpkins,” said Southard. “I still get excited.”

According to Southard, the PG&E power outage affected the preparation of the event. Students were not allowed on any SRJC campus during the power outage, which reduced the number of volunteers significantly and prolonged some preparatory tasks for the event.

“We kept a skeleton crew. I authorized the classified staff to work these last couple of days. We never lost power at Shone Farm,” said Goldstein. “We just needed to prepare.”

SRJC President Dr. Chong made an appearance and said the festival was a relief in light of recent events.

“This is exactly what the community needed after the PG&E outages this week,” said Chong.

Guests were impressed by the event throughout the day, both newcomers and annual  attendees.

Jackie Wilson attended the festival with her family for the second consecutive year in support of SRJC events and local farms.

Wilson’s kids loved the wide variety of pumpkins Shone Farm offers; an attraction that most guests gravitate to.

Diggs returns to Shone Farm annually because of his passion for hands-on-learning for both the community and SRJC students.

“In my heart I will always be a visitor,” said Diggs.